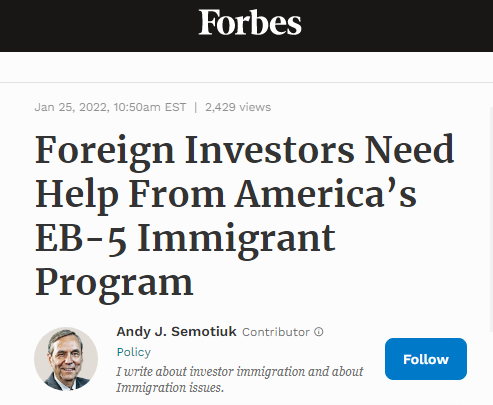 Marcos Bertola is a U.S. EB-5 Regional Center foreign immigrant investor whose green card is in limbo because the Regional Center program shut down while his application was in process. He is one of over 30,000 such committed investors whose I-526 immigration petitions are stuck. At least $15 billion in capital investment and almost 500,000 American jobs are caught up in this logjam according to IIUSA, Invest in the USA.
Better Understanding Needed

“I believe the lack of sympathy from Congress towards what investors are going through with the lapse of the Regional Center program is due at large to people not realizing who they are,” said Bertola. He added, “Investors are seen as millionaires who can afford to wait another year so that the delay won´t affect their lives. But in our case, and that of many EB-5 investors we know of, we are just middle-class families investing our savings in the American economy to give a better education for our children and because we believe in the excellence of the American institutions to such a degree that we want to be part of it.”

Bertola describes how the process started for his family, “The decision to immigrate to the US started when my daughter was finishing high school and decided to become a nurse. Researching on how she could study in the US we learned that EB-5 seemed an opportunity for us to be with her as a family. My wife who is a researcher graduated with a Master´s Degree at one of the most prestigious universities in Latin America was thrilled with the idea of being able become a doctor in the US.”

Bertola filed his EB-5 investor petition in 2016, when adjudication times were expected to be around 14 months. It took three years for it to be approved, yet he was glad and expected things to run faster after that. The next step in their immigration journey was to get approval from the National Visa Center to get their immigrant interviews at the U.S. Consulate abroad. He and his wife even bought a house in the US in 2019 in Orlando, Florida expecting everything would work out. That house has been empty ever since, creating a financial burden of paying for two households, with property taxes, insurance, HOA, etc., in addition to their expenses overseas.

Consulates Closing Didn’t Help
Bertola indicates, “Our documents were filed at the National Visa Center on March 2020, but due to the pandemic, Consulates worldwide closed that month. When they resumed immigration interviews one year later, there was a 4-tier priority to determine which immigration petitions should be interviewed first and EB5 cases were last on the list.”

The Bertola oddessy continued, “Our interview was finally scheduled, with the assistance of a Florida Senator´s office, for July 30th, 2021 after the sunset of the Regional Center Program. A week after the interview, we got an email from the Consulate saying that everything was good on our end, and they were waiting for the reboot of the program to issue our visas. We were in the incredible situation of having all steps of our petition approved, including the Consulate interview, but unable to get our visas due to the lapse. Our passports are still with the Consulate since then.”

Psychological Toll
This wait has also put an immense psychological burden on his children. “My daughter who was on her 3rd year as a nursing student has just decided she can no longer wait to go. My wife could be graduated in the biomedical field and working in healthcare in the U.S. by now if not for this reauthorization lapse. Our lives have been put on hold for many years in the expectation of moving to the U.S., but every time a deadline seems close, a disappointment comes and uncertainty grows,” Bertola says. He adds, “Those years of professional development and achievements are being robbed from us, especially my children who are starting their careers. Our personal belongings are in a warehouse for more than a year, ready to be shipped, and we spend our time searching the internet for news about the reauthorization which never comes.”

No Sense Of Urgency
The way Bertola sees it, “There is no sense of urgency in Congress towards the reauthorization, and investors are being used as hostages in the negotiations.” A grandfathering bill, such as FIFPA (Foreign Investors Fairness Protection Act) could easily solve this problem, but according to Bertola it lacks political awareness. “It´s a damaging situation for the reputation of the program and could bring as consequence the loss of millions of dollars and thousands of jobs if the investors start to sue to get their investment back. Nobody wins, but we investors are the weakest link,” says Bertola.

“Right now, our best hope is to have our voices and personal stories heard. I have a dream of moving to America as a legal immigrant and to become an American citizen in the future, but that dream is being denied for thousands of investors who did nothing wrong but were caught in the political turmoil of these past years,” concludes Bertola.

Grandfathering Legislation Needed
Dealing with this problem, Kurt Reuss a securities broker and founder of EB5 Marketplace, recently wrote, “Existing EB-5 regional center investors are stuck in limbo right now as their applications remain frozen due to the lapse of the Regional Center Program. The U.S. government has an obligation to live up to its end of the bargain: adjudication of the petitions of investors who invested and filed in good faith. To do otherwise, would be just plain wrong and would negatively impact our immigration reputation.”

According to Reuss, who advocates an end to the Regional Center program in favor of the EB-5 direct investment option, “Simple grandfathering legislation can protect those investors who filed their petition when the program was authorized. Take care of past regional center investors who acted in good faith and end the program with that.”

Whether or not the Regional Center program is renewed, it is clear that it is time to help the foreign investors caught in the fray.