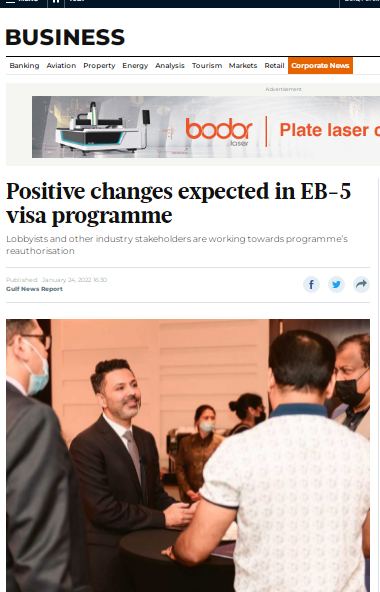 The EB-5 Immigrant Investor programme, the investment immigration programme of the United States, is expected to undergo positive changes in the upcoming months. Investors with pending petitions for the EB-5 programme, many of whom are residents of the Middle East, should take comfort in the strong advocating efforts of immigrant organisations in relentlessly pushing for the protection of their interests.

Created by the United States Congress in 1990, the EB-5 programme allows foreign investors to qualify for immigration benefits through an investment of $500,000 in a new commercial enterprise in the United States. The EB-5 programme allows the petitioner along with the petitioner’s spouse and unmarried children under the age of 21 to obtain U.S. Green Cards, with which they can freely live and work in the United States. For decades, the EB-5 Regional Centre programme, which permits investors to pool their funds under the sponsorship of a regional centre and take advantage of indirect job creation and a passive investment, has been the most popular route through which investors participate in the EB-5 programme.

Lobbyists and other EB-5 industry stakeholders are continuously working towards the reauthorisation of the EB-5 Regional Centre programme, which lapsed on June 30, 2021. According to industry insiders, the programme is expected to be reauthorised in early 2022. Senior staff at Senator Grassley’s office have confirmed that Congress will address the suspension of the EB-5 Regional Centre programme “in the first half of 2022.”

“We have been diligently communicating with our U.S. counterparts, lawyers, and lobbyists to bring the market the most updated information. According to our study of the past 21 years of congressional record, we expect reuathorisation to occur within the first quarter of 2022. With reauthorisation around the corner, we are encouraging all prospective EB-5 investors to be prepared so they can file as soon as the programme is reauthorised,” says Shai Zamanian, Legal Director of The American Legal Centre, a top immigration consulting firm in Dubai.

Among EB-5 industry stakeholders pushing for reauthorisation is Invest In the USA (IIUSA), a not-for-profit industry trade association for the EB-5 Regional Centre programme, which has been actively committed to the reauthorisation effort. According to reports by IIUSA, progress is being made in Congress for reauthorisation of the EB-5 Regional Centre programme and it is expected that resumption of the programme will occur in February. The EB-5 Regional Centre programme would have been reauthorised had it not been for Congress passing a Continuing Resolution (CR) at the start of the U.S. federal government fiscal year on October 1, 2021.
Failing to reach consensus on the federal spending bill, Congress passed a CR to avert a full government shutdown. Congress once again had the opportunity to pass the federal spending bill on December 3, 2021 but given that Democrats and Republicans did not agree on a comprehensive budget bill, a second CR was passed, which will expire in February 2022. With an average of 5 CRs enacted per year between FY1998 and FY2019, the issuance of CRs has become commonplace for Congress prior to agreeing on the final federal budget. However, EB-5 industry experts are confident that the current CR will be the last for this financial year given that congressional elections are coming up in 2022. Therefore, it is highly likely that Congress will pass the federal spending bill in mid-February 2022. Furthermore, lobbyists in Washington, DC have reported that the EB-5 Regional Centre programme has been included in the legislation and will be reauthorised along with the federal budget in early 2022.

Along with reauthorisation, advocacy groups in the United States have been fighting for positive changes to the programme to protect the interests of EB-5 investors. American Immigrant Investor Alliance (AIIA), an immigrant advocacy organisation based in the United States, has been actively pushing for passage of the Foreign Investor Fairness Protection Act (FIFPA). FIFPA is a two-page bill designed to protect the rights of existing EB-5 investors and contains a grandfathering provision to ensure that existing investors will not be negatively affected by any possible future lapses of the EB-5 Regional Centre programme. AIIA and other EB-5 industry stakeholders urge that expiration of the programme should not have a retroactive effect on existing petitioners. This measure will not only benefit existing investors but will also benefit the U.S. economy as it will increase the attractiveness of the programme for prospective investors. With increased participation in the EB-5 programme, a greater amount of foreign cash will be injected into the U.S. economy which ensures that more jobs are created for U.S. persons. According to AIIA, language contained in the FIFPA is highly likely to be included in any reauthorisation bill in the future. AIIA has received assurances during its meetings with influential congressional offices that there are no objections to a grandfathering provision.

With investor protection expected to be added to reauthorisation legislation, the EB-5 Regional Centre programme will become even more attractive for foreign investors. Such legislation will ensure that existing investors will be able to take advantage of the benefits of the programme without being adversely affected should there be future changes.