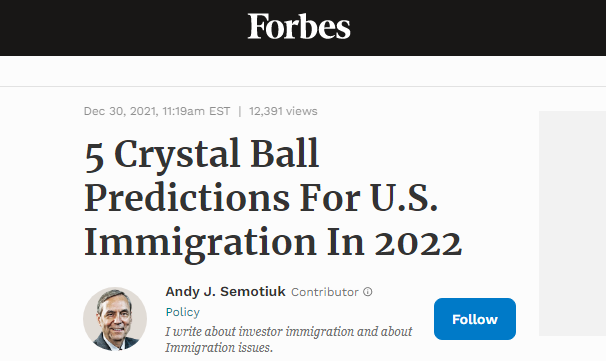 Here are my top five U.S. immigration predictions for 2022:

1. Changes to H1-B Work Visas
The Biden administration's latest regulatory plans reveal that it will continue to reform the H-1B visa program for professional workers, including raising the wages of those workers. According to projections of the U.S. Citizenship and Immigration Service (USCIS), other upcoming changes to the H1B visa program will:

Redefine the H-1B employer-employee relationship.
Establish new guidelines for employer site visits.
Clarify rules for F-1 students awaiting a change of status to H-1B.
Clarify the requirement that an amended or new H-1B visa petition be filed if there are material changes to employment, including a new worksite location.
We will also see changes to the prevailing wage rules for H1-B visas and allocations of H1-B visas according to salary requirements, a promise Biden made during the presidential campaign.

But this tinkering with the H1-B visa program will not be enough.

The U.S. population growth hit a record low in 2021, hardly moving at all in the 12 months ending July 1, according to the U.S. Census Bureau. The country added less than 400,000 people on net, and thus for the first time since 1937, grew by less than 1 million people. The reasons for this decline are

2) lower immigration levels to the U.S. and

3) higher mortality rates due to an aging population.

The Covid pandemic only amplified these three causes this last year.
The problem with the declining U.S. population growth rate is that there are fewer Americans to fill jobs and to pay the taxes that keep programs like Social Security financially healthy. This trend should force America to increase immigration levels. But will it?

Consider that countries like Canada, Japan and Germany have already addressed their problems in this area. For example, Canada has significantly boosted its immigration population year-by-year, from about the 250,000 level a few years ago, through to about 300,000 last year and 411,000 projected immigrants in 2022. The U.S. will need to seriously crank up its immigration population as well, particularly in regard to foreign skilled workers, to keep America competitive. Just relying on a modified H1-B program won’t cut mustard any more. Look for Congress to tackle this issue in 2022.

2.  Increases in Premium Processing
The premium processing service provided by the USCIS guarantees expedited visa processing for certain employment-based visa petitions. The USCIS guarantees that the petition will be processed within 15 days or will return the petitioner's filing fee. This service is expected to be expanded in 2022. The specific contents of a new final rule – including the case types eligible for premium processing, processing timelines, and corresponding fees and implementation dates – are not yet known. There is speculation, however, that the expanded service will be available for applications involving Employment Authorization Documents, I-539 applications to extend or change status, and EB1, EB2, and EB3 green card applications.

3.  Increases in Filing Fees for Visas
A previous attempt to increase USCIS fees for various immigration applications was struck down by a federal court in September 2020. However, there is evidence that the USCIS is not working on a sound financial footing and needs more funds to process backlogged applications. For these reasons, in January 2022, the Department of State is expected to raise visa application filing fees at consulates. On the other hand, in March the USCIS plans to increase its petition and application filing fees.

4.  Speeding up Processing of Visas
As the pandemic lifts Consulates will reopen and need to double down on visa processing, implementing initiatives to catch up on backlogs. Emphasis will be in increasing efficiency in processing, including more online video interviews. Increases in government fees should result in more workers coming on stream to deal with the heavy demand for quicker processing of applications.

5.  Relief for Regional Center EB-5 Investor Immigrants
Passage of a bill like the Foreign Investor Fairness Protection Act to provide relief for foreign investors who invested in the regional center EB-5 program will take place in 2022. The bill will be passed to grandfather these investors in to allow them to get green cards.

Nobody can predict the future. But the foregoing predictions have a strong chance of making it. We will see how well I do next New Year.