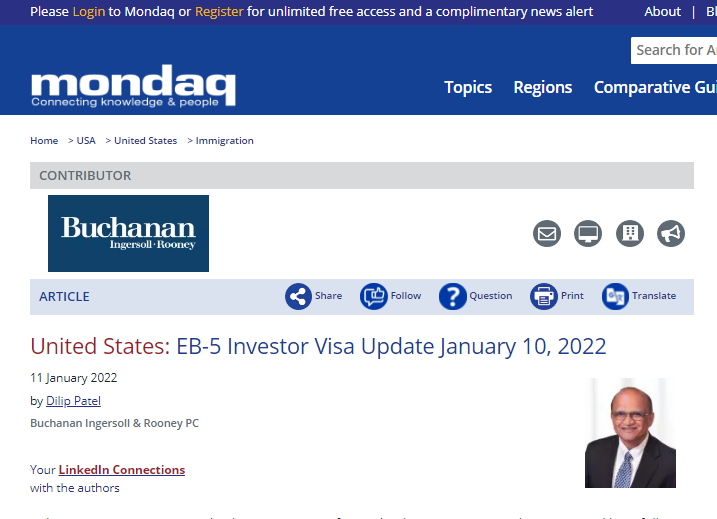 A decision on January 5, 2022 by the Department of Homeland Security (DHS) to drop an appeal hopefully provides some clarification to confusion and uncertainties about the minimum required investment caused by a June 22, 2021 Federal Court Decision.

In this Article we will provide more details about that and an update about the EB-5 Regional Center Program which expired on June 30, 2021.

EB-5 is not for the faint hearted, and certainly not for those who cannot easily afford to have the funds tied up for a long time and a potential loss of the amount invested. Here are the details.

EB-5: Amount of Investment
The program was created in 1990 and the law specified that the standard amount required was $1 million, but if the investment was in a targeted employment area (TEA), the required amount was $500,000. The 1990 law contained a process by which the Secretary of Homeland Security could increase the standard amount. On July 21, 2019, then-Acting Homeland Security Secretary Kevin McAleenan signed a Final Rule, which among other things, increased the standard investment threshold to $1.8 million and the reduced investment threshold to $900,000 effective November 21, 2019. On June 22, 2021, in Behring Regional Center, LLC v. Wolf, et al., the U.S. District Court for the Northern District of California held that there was a procedural defect in the July 21, 2019 regulation and therefore the increase was not legal. As the July 21, 2019 regulation was no longer effective, the required amount would revert to $1 million and $500,000. But the story did not end there. DHS filed an Appeal which could have potentially overcome the Court decision and reverted to the higher amount. Now that DHS has dropped its Appeal, the minimum investment for investors who create ten jobs in a Targeted Employment Area (TEA) is back to $500,000. It also confirms that states have the authority to designate an area as a TEA.

EB-5 Regional Center Program Law Expired June 30, 2021
It is very important to remember that there are two EB-5 programs. The 1990 law created what is commonly called the "EB-5 Direct Jobs Program" or "Stand-Alone Program." That program does not expire and continues.

For now, Direct EB-5 investments are very attractive at $500,000 for TEA investments and $1 million in other areas.

Most commentators anticipate that either USCIS or Congress will seek to increase the minimum investment amount back to a higher number. In the meantime, Regional Center investors continue to hope for Congressional reauthorization of the Regional Center program.