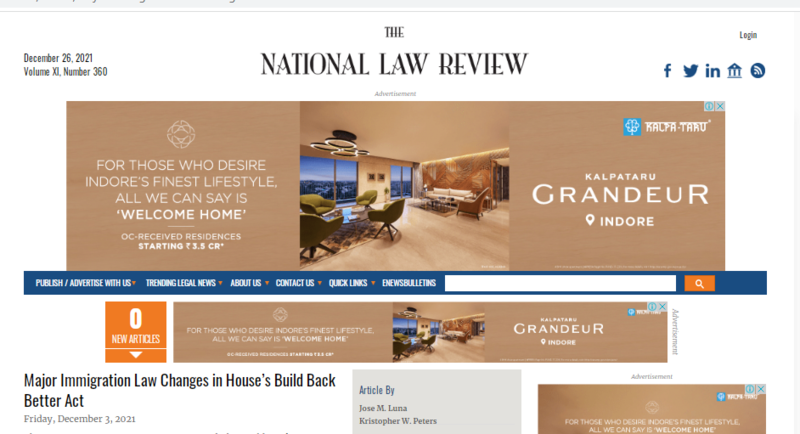 The U.S. House of Representatives passed the Build Back Better Act (BBBA) (H.R. 5376) by a vote of 220–213. Supported by the Biden Administration and congressional Democrats, the controversial bill heads to the Senate with key immigration reform provisions.

Lawful Permanent Residence
Section 60001 of the BBBA includes language that would amend the Immigration and Nationality Act (INA) to permit foreign nationals, documented and undocumented, to apply for adjustment of status after payment of a supplemental fee of $1,500 and completing a background check with a medical examination.
The following individuals would qualify for permanent residency:

Deferred Enforcement Departure recipients.
Each category must meet separate eligibility and physical presence requirements and would be subject to grounds for inadmissibility. Some inadmissibility grounds may be waived for limited humanitarian, family unity, or public interest purposes.

Recapture of Unused Immigrant Visa Numbers
Section 60002 amends the INA to “recapture” unused immigrant visas. Currently, the waiting list for green cards has grown well into the millions. Each year, there is a ceiling of green cards available for employment-based and family preference immigrants. The accumulation of applications, along with disruption of processing caused by the COVID-19 pandemic, has resulted in hundreds of thousands of unused green card slots.

This provision would stipulate the available visa numbers will include unused visas from prior years. The language in the bill recaptures unused family-based and employment-based visas from Fiscal Year 1992 onward. In addition, Diversity Visas that were not issued or have not been used since FY2017 would also be recaptured.

Adjustment of Status
Section 60003 revises the filing requirements for adjustment of status applications in both the family-based and employment-based categories. New Section 245(n) to the INA would permit family-based and employment-based applicants (and the spouse and children of such applicants) to apply immediately for adjustment of status for a supplemental fee of $1,500 (for the principal applicant) and $250 (for each derivative beneficiary), even though a visa number may not be available yet.

In addition, Section 60003 would create a waiver from the annual and per-country family-based and employment-based immigrant visa numerical limitations for individuals who:

Have filed adjustment of status applications; and

Have a priority date that is at least two years before the date of application for a waiver of the per-country numerical limitations.

This waiver can be requested at a supplemental fee that varies depending upon the family-based or employment-based category under which the adjustment of status application was filed as follows:

Employment-based applicants: Individuals who filed for adjustment of status based on an approved I-140 petition in the EB-1, EB-2, or EB-3 category would be required to pay a supplemental fee of $5,000.

Immigrant Investor-based applicants: Individuals who filed for adjustment of status based on an approved EB-5 petition would be required to pay a supplemental fee of $50,000 (although it is unclear how this waiver would apply to EB-5 adjustment of status applicants who filed based on an approved I-526 associated with an approved regional center following the sunset in authorization for the EB-5 Immigrant Investor Regional Center Program on June 30, 2021).

Additional Supplemental Fees
Section 60004 establishes additional supplemental fees for immigrant visa petitions (which are in addition to other applications fees, such as filing fees, early adjustment fees, and the waiver of numerical limitation fees provided for under Section 60003 of the BBBA). These include:

Family-based applicants: A supplemental $100 fee for family-based immigrant visa petitions for: (1) married and unmarried sons and daughters, brothers and sisters, and immediate relatives of U.S. citizens; and (2) spouses and unmarried children of lawful permanent residents.

All supplemental fees paid in conjunction with each of these immigrant visa petitions would be deposited into the General Treasury fund, not given to USCIS.

USCIS Supplemental Funding
Section 60005 would appropriate an additional $2.8 billion to USCIS “for the purpose of increasing capacity of U.S. Citizenship and Immigration Services to effectively adjudicate applications described in sections 245B and 245(n) of the Immigration Nationality Act, as added by sections 60001 and 60003 of this Act, respectively, and to reduce case processing backlogs.”

In its current form, the BBBA is aimed at providing immigration relief to certain documented and undocumented foreign nationals. The immigration provisions also aim to improve the green card backlogs that have notoriously plagued USCIS over the past several years by recapturing unused visa numbers and permitting more individuals in the family- and employment-based categories to apply for adjustment of status.