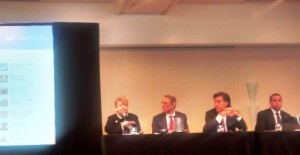 Foreign investors are an asset to the U.S. economy. Here’s why.

For one thing, international individuals spend a lot more money, their median price points are much higher. Secondly, they tend to bring their friends, associates and relatives with them, according to Teresa King Kinney, CEO of Miami Association of Realtors, who spoke during the Foreign Buyers & Investors panel at NAREE’S 49th Annual Real Estate Conference, which took place in magic City this year.

“We love our international buyers,” she said. “Every (foreign) buyer who comes into the marketplace means many many more international sales.”

According to stats that Kinney presented from the National Association of Realtors on home buying activity by international clients, there’s 10 percent less sales this year, but 13 percent more dollar volume, which shows that foreigners are buying at higher prices.

Of the international purchases,  51 percent come from the following five countries, in descending order: 1) China, 2) Canada, 3) Mexico, 4) India, 5) the U.K.

And 50 percent of all international sales are spread between the following four states: Florida (21 percent), California (16 percent), Texas (8 percent) and Arizona (5 percent).

According to panelist  Ronald Fieldstone, Esq., of Arnstein & Lehr L.L.P., there are two elements of foreign buyers: those who want to move to the United States and leave their own nation for one reason or another, and those looking to purchase second or third homes, which are usually designated for their children while they obtain an education in the United States.

What makes foreign buyers attractive to Miami per se is that they pay the same amount in property taxes, but use up less resources, since they only come up to the properties part of the time, according to Kinney.

“Foreigners spend more money than locals, because they’re on vacation,” she added.

Fieldstone mentioned the significance of EB-5 investment program, which provides green cards to foreign nationals and their families who invest at least $500,000 in the United States. The program is an important source of capital for real estate projects.

About $24 billion in foreign capital flowed to U.S. properties during the first quarter of 2015, equaling more than half the total investment during all of 2014, according to Cushman & Wakfield.

Malpica added that his company has noticed an emergence of a ‘brand-nostic’ approach to purchasing real estate, where one looks more at a lifestyle quality influencing the purchase. Examples of this are resort communities or waterfront properties, to name a few.