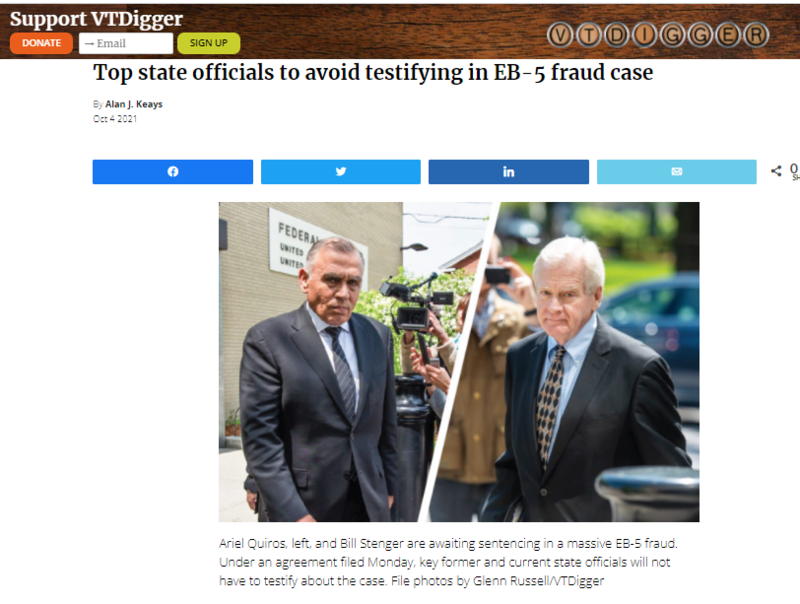 High-ranking past and present state officials accused by attorneys for Bill Stenger, Jay Peak’s former CEO and president, of helping to perpetuate the largest fraud in Vermont’s history do not have to take the witness stand to explain their actions in the criminal case against him.

Stenger’s lawyers and federal prosecutors filed an agreement Monday on the evidence to be considered at his sentencing hearing.
With the evidence dispute settled, top former and current state officials subpoenaed by Stenger’s lawyers for a court hearing next week won’t be called to testify.

The hearing, a prelude to Stenger’s sentencing, was expected to shed new light on the state’s role in what federal regulators termed a “Ponzi-like” scheme to defraud hundreds of foreign investors of millions of dollars.

That money had been raised by Stenger and his former business partner, Ariel Quiros, Jay Peak’s former owner, in a series of developments over a span of several years in Vermont’s Northeast Kingdom, financed by foreign investors through the federal EB-5 visa program.

State officials for years have denied public records requests seeking details into their actions, and the testimony next week would have been a chance to expose those long-held secrets. The two-week hearing was set to feature a parade of officials responsible for overseeing those projects and the EB-5 program in Vermont. They were to be grilled by Stenger’s lawyers over their actions, or lack thereof.

Stenger’s attorneys, in a filing last month, laid out their case that state officials knew about the fraudulent activity associated with the projects long before they ever told investors or the public.

Stenger’s lawyers hoped to mitigate the blame against their client by claiming state officials knew what was going on but didn’t take action to stop it.
Among those called by Stenger’s lawyers to testify:

Sarah London, who was general counsel to then-Gov. Peter Shumlin.
Liz Miller, who was Shumlin’s chief of staff.
Patricia Moulton, then-secretary of the Agency of Commerce and Community Development.
Michael Pieciak, who was deputy commissioner of the state Department of Financial Regulation. He is now commissioner of that department.
Susan Donegan, who had been commissioner of the state Department of Financial Regulation.
Meanwhile, prosecutors were expected to call their own witnesses, intending to show that Stenger was more than a bystander to the fraud or that he was “duped” by Quiros. Those prosecution witnesses included two other defendants named in the same indictment brought against him in May 2019: Quiros and William Kelly, a longtime key adviser to Quiros.

Quiros and Kelly have reached plea deals with prosecutors and are awaiting sentencing. Quiros faces up to 97 months. Kelly could get up to 36 months in prison.

Stenger has already pleaded guilty to providing a false statement regarding one of the EB-5-financed projects, AnC Bio Vermont, a failed biotech research facility planned for Newport.

As part of a plea deal, prosecutors could seek up to a five-year prison term for Stenger while his attorneys could argue for any lesser amount of jail time.

The hearing next week was expected to center on Stenger’s “relevant conduct” in other projects and developments, not just the AnC Bio plans, to demonstrate Stenger’s role in the fraudulent activities.

Stenger’s lawyers have said they will ask that Stenger serve no jail time. Prosecutors have yet to disclose what penalties they will ask a judge to impose.

The agreement Monday follows a hearing Thursday in which the prosecutors and Stenger’s attorneys did not appear likely to reach any accord on evidence, and instead, the lawyers laid out their plans for moving forward to the two-week hearing.

Judge Geoffrey Crawford was set to preside over that hearing in federal court in Rutland.

The agreement filed in federal court Monday heads off that hearing.

What happens now?
Now a sentencing hearing for Stenger will be scheduled, likely before the end of the year. First, probation officers need to file a presentence report to help determine where Stenger’s offense falls within the advisory guidelines for federal sentencing.

Crawford, in sentencing Stenger, does not have to follow those guidelines, but federal judges often give them great weight.

The deal will prevent prosecutors from presenting any evidence that dates back past 2011, including the sale of the Jay Peak Resort to Quiros in 2008. Prosecutors, in a 100-page filing last month, had contended Stenger had aided Quiros in carrying out fraudulent transactions that allowed Quiros to pay for the ski resort.

“The facts show that Stenger was not just a bystander to the fraud that occurred, but an integral part of the sweeping fraud scheme, which could not have happened without his involvement,” prosecutors wrote in their filing.
Brooks McArthur, an attorney for Stenger, declined to comment Monday. Federal prosecutors, through a spokesperson, also declined to comment Monday.

The 100-page filing by prosecutors last month in Stenger’s case has more than 200 exhibits attached, including emails from various Jay Peak officials and others, text message exchanges among Quiros, Kelly and Stenger, financial spreadsheets, promotional materials from the projects, and newspaper clippings.

What prosecutors allege
The filings provide an inside look at Stenger’s action behind the scenes, as opposed to the public persona he displayed in cheerleading for the projects to increasingly worried foreign investors.

For example, in February 2014, Stenger wrote to a Chinese investor who raised concerns about the lack of federal Food and Drug Administration approval for products that the AnC Bio Vermont facility would make.

Stenger, according to an exhibit, wrote that “we are confident that the medical devices will receive FDA approval, as these devices are based on technologies developed over the course of many years at the AnC Bio Korea facility. However, in the worst-case scenario, if all of the devices were denied FDA approval, AnC Bio would still distribute these technologies internationally.”

Prosecutors, in their filing, described Stenger’s response as a “fallback explanation” about selling products internationally, one his many “deflection strategies” to not address the specific concern over the lack of FDA approval for the products.

In another instance in February 2013, one exhibit stated Stenger wrote a Houston immigration attorney about AnC Bio Vermont: “We have about 80 of the 220 slots left and they will be full by May 1st.”

However, according to prosecutors, over 180 of the 220 slots remained open.

“Stenger and his assistants were carefully tracking the number of investors committed to the program,” prosecutors wrote. “Thus, Stenger knew that he was lying to make his AnC marketing look more successful than it was.”

And, prosecutors wrote, he was not always consistent in the lies. On April 2, 2013, according to an exhibit, Stenger wrote to an immigration attorney, “[w]e are more than half subscribed and will be full in about six more weeks.”

Then, in another exhibit, Stenger wrote May 3, 2013, to a recruiter for Chinese investors, “AnC is doing very well. About 50 spots left.” At that time, according to prosecutors, Stenger wasn’t close to filling the project, with 150 spots left.

Also, an exhibit features a New York Times article from 2012, after Stenger met with the reporter to talk about the EB-5 projects at Jay Peak and in Newport, the filings stated. The article stated, “Along with state officials, who monitor and audit their projects, and Sen. Patrick J. Leahy, a Democrat who has championed the program in Washington, [Stenger and Quiros], have sought to make Jay Peak a national showcase for the investor program.”

Stenger, according to the prosecutors’ filing, knew that state officials did not audit the projects.

“Stenger picked that one statement from the article to highlight in AnC marketing brochures,” prosecutors wrote. “It was quoted alone in large type on one page early in the brochure.”