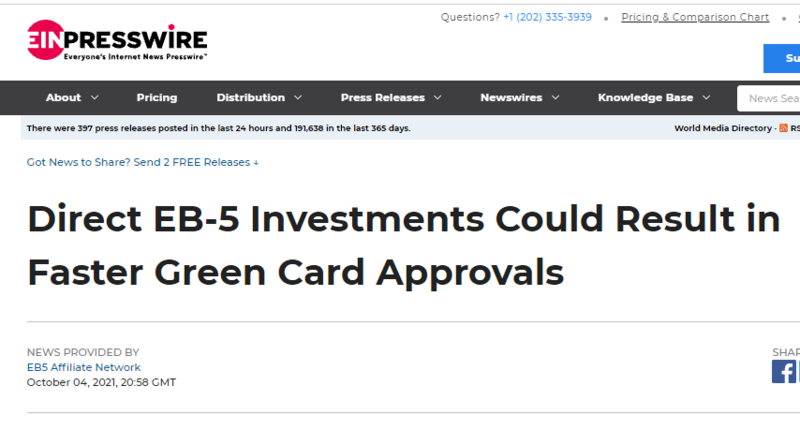 On June 30, 2021, the EB-5 Regional Center Pilot Program expired and, unlike in previous years, the U.S. Congress did not pass legislation to reauthorize the program prior to the program’s sunset date or shortly thereafter. As a result, U.S. Citizenship and Immigration Services (USCIS) is not accepting new I-526 petitions for regional center-sponsored investments and has stopped processing cases for regional center investors who filed on or before June 30. USCIS continues to accept and process I-526 petitions for direct EB-5 investments, as this program does not require reauthorization.

Because USCIS is only adjudicating EB-5 immigration cases for direct investors—the rest are on hold indefinitely—foreign nationals who act quickly to invest and submit an I-526 petition could experience a noticeably faster processing time. “We think that investors who file an I-526 petition now stand a chance of having their case processed faster than if USCIS was still working on cases for regional center investors,” says Sam Silverman, founder and managing partner of EB5AN. “Our team built a model to estimate approval times based on direct-only processing. We can’t say with 100% certainty, but the model suggests that the time is now to make a direct investment and apply for a green card.”

Historically, a large majority of EB-5 investments have been offered through regional centers. This is because business enterprises raising capital through regional centers are allowed to prove new job creation using an econometric method rather than hire permanent full-time employees. This option makes EB-5 capital accessible to ventures such as construction projects that indirectly create jobs through considerable economic activity but do not directly employ large numbers of full-time employees. By some estimates, approximately 95 percent of all immigrant investors participate in regional center-sponsored investments. With 95 percent of their case files on hold, the adjudicators in the Immigrant Investor Program Office at USCIS should have extra capacity and more time to work on direct EB-5 petitions.

“Direct EB-5 investments are the only game in town,” states Silverman. “Our phones haven’t stopped ringing since the minimum investment amount reverted to $500,000. People from all over the world want to immigrate to the United States. The direct EB-5 option can be what helps a family to get green cards. And, based on our analysis of USCIS processing times, it could happen quickly.”

Webinar registrants can submit questions in advance to info@eb5an.com.

Created in 1990, the EB-5 Immigrant Investor Visa has long been a gateway to the United States for foreign nationals living abroad, as well as by those already working or studying in the U.S. on nonimmigrant visas including H-1B, L-1B, and F-1. Thousands of families from all over the world have successfully immigrated by making a job-creating investment in a U.S.-based business enterprise. The EB-5 program has facilitated billions of dollars of foreign direct investment into the United States and created tens of thousands of jobs over the last three decades.