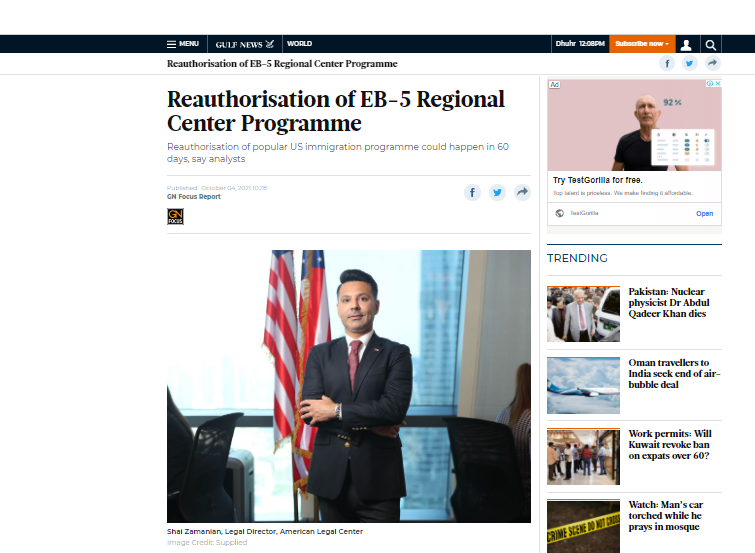 The United States residency by investment programme, called the EB-5 Immigrant Investor programme, is among one of the most popular investment-based immigration options between foreign nationals in the Middle East and North Africa region looking to immigrate to the United States.

The EB-5 programme was created by Congress as part of the Immigration Act of 1990 to stimulate the US economy through job creation and capital investment by foreign investors. In short, the programme provides investors the opportunity to obtain US residency by investing $500,000 in a new commercial enterprise, with which a minimum of 10 jobs must be created for US persons. The programme has gone through drastic changes over the course of the past two years, including but not limited to a price increase from $500,000 to $900,000 in November 2019, a price decrease from $900,000 back down to $500,000 in June 2021, and lastly the lapse of the program on June 30 this year due to a lack of reauthorisation from Congress. With the lapse of the programme, the US Citizenship and Immigration Services (USCIS) announced that no new petitions from foreign investors will be accepted under the EB-5 Regional Center Programme.
Prior to the passing of the Continuing Resolution by Congress this past month, many industry leaders had predicted that the EB-5 Regional Center Programme would be renewed as part of Congress passing the Federal Spending Bill along with the Infrastructure Bill which has been a hallmark of the Biden administration’s promise. However due to Congress being unable to meet in the middle and negotiate the passing of these bills on time, this has translated into delays on when new EB-5 applications can be accepted.

At this juncture, Congress has passed what is called a Continuing Resolution, which effectively provides the US government extra time to come up with a final compromised deal that works for both Democrats and Republicans. This is a band-aid solution to avert a government shutdown while providing extra time to find consensus. The EB-5 programme was not attached to the Continuing Resolution passed by Congress and thus the EB-5 Regional Center Programme remains suspended until Congress meets their obligations.

The general agreement between EB-5 industry leaders and experts is that the programme will be reauthorised this winter, most say that it will happen within the next 60 days. There are such larger topics that Congress is grappling with and need to work out that EB-5 is not a topic about which they are in deep conflict about.

At the end of the day, EB-5 provides a vehicle through which the U.S. economy is injected with cash and massive job creation is guaranteed. Thus, when the larger topics on government spending are agreed upon, EB-5 reauthorisation will pass along with them. So far, it does appear that the EB-5 Regional Center programme will be reauthorised within the next 60 days, and it will be introduced back at $500,000. However, once it is brought back, there may be a short window of opportunity to file an application at $500,000 before a price increase back to $900,000. Thus, families looking to apply for their Green Cards through EB-5 should align their documents, and have their file ready when the window of opportunity opens.
The American Legal Center, a team of US licensed lawyers and professionals specializing in the EB-5 programme out of their offices in Dubai, predicts that the programme will once again be renewed by Congress and investors will have a short window of opportunity to file their applications for US residency at $500,000 this winter. The next dates on which significant legislative bills are up for vote in Congress are expected to be passed on October 18 and December 3. Therefore, those dates are to be watched closely for the reauthorisation of the program.

Shai Zamanian, the Legal Director of The American Legal Center, has filed the most EB-5 applications out of the MENA region and urges prospective investors to begin collecting their documents to be prepared to catch the next window of opportunity by the end of this year.

“We are confident that the EB-5 programme will be reauthorised within the next 60 days. Those who act quickly in collecting their documents and choosing a project will be the winners once the programme is reauthorised as we expect that there will be a huge surge in applications,” says Zamanian.
“We are in weekly discussions with other EB-5 industry leaders and will continue to educate the market with updates. For now, we are advising our clients to prepare their documents while we await the news of reauthorisation.” Therefore, while the programme remains suspended, foreign investors wishing to begin their immigration journey to the US must amply prepare themselves for the reauthorisation of the programme by engaging the right advisors to begin their process and by gathering the required documents.