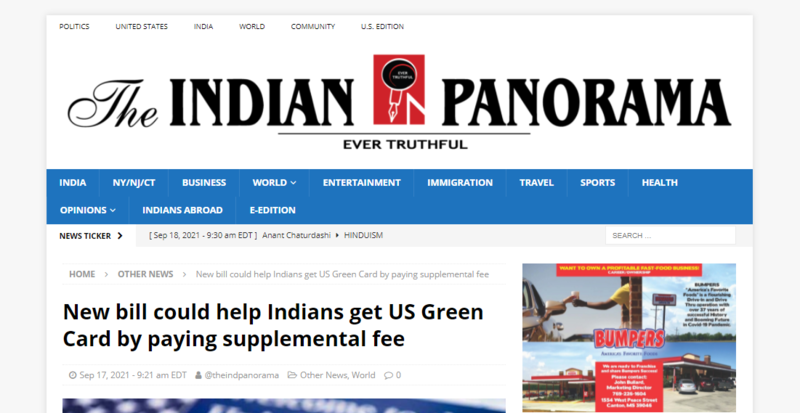 WASHINGTON (TIP):Millions of people stuck for years in the employment-based Green Card backlog in the US, including a sizable number of Indians, can hope for a lawful permanent residency in America by paying a supplemental fee if a new House bill is passed into law.

The move, if included in the reconciliation package and passed into law, is expected to help thousands of Indian IT professionals who are currently stuck in an agonizing Green Card backlog.

A Green Card, known officially as a Permanent Resident Card, is a document issued to immigrants as evidence that the bearer has been granted the privilege of residing permanently in the US.

According to the committee print released by the US House of Representatives Judiciary Committee, which has jurisdiction over immigration, an employment-based immigrant applicant with a “priority date that is more than 2 years before” can adjust to permanent residence without numerical limits by paying a “supplemental fee of USD 5,000.” The fee is USD 50,000 for the EB-5 category (immigrant investors). The provisions expire in 2031, the Forbes magazine reported.

For a family-based immigrant who is sponsored by a US citizen and with a “priority date that is more than 2 years before”, the fee for getting a Green Card would be USD 2,500.

The supplement fee would be USD 1,500 if an applicant’s priority date is not within two years but they are required to be present in the country, according to the committee print. This fee would be in addition to any administrative processing fee paid by the applicant.

However, the bill does not contain permanent structural changes to the legal immigration system, including eliminating country caps for green cards or increasing the annual quotas of H-1B visas.

Before becoming law, the provisions would have to pass the Judiciary Committee, the House of Representatives and the Senate and be signed by the president, the report said.

According to a report in CBS News, if successful, the legalization plan would allow undocumented immigrants who came to the US as children, Temporary Protected Status (TPS) beneficiaries, farmworkers and other pandemic-era essential workers to apply for permanent US residency, or green cards.

Reacting to the bill, David J Bier, Immigration policy analyst at Cato Institute, said, “employment-based applicants can adjust if they have waited 2 years from their priority date… this is almost like abolishing the EB caps for adjustment applicants who can pay $5K. Awesome!”

“For EB5, it’s $50K fee. Even those who can’t afford the fees or who are abroad would benefit from freeing up this cap space for others. It’s unfair that the bill maintains the country caps as is, so Indians and Chinese will be the only EB applicants required to pay the $5K/50K,” he said in a series of tweets.

He said that the base caps for diversity, family, and #H1B all remain the same.

“Since H1B is the feeder for most EB, that’s basically like keeping the EB cap the same. No reforms to #H2A, #H2B, or other work programs, so nothing to help unskilled workers/address the border,” he said.

“Basically, this bill will help a few legal immigrants abroad indirectly, but the main purpose is integration of existing immigrants. That’s a noble cause, but the immigration/migration part of immigration reform is just left out. No new pathways for workers, same system,” he tweeted.