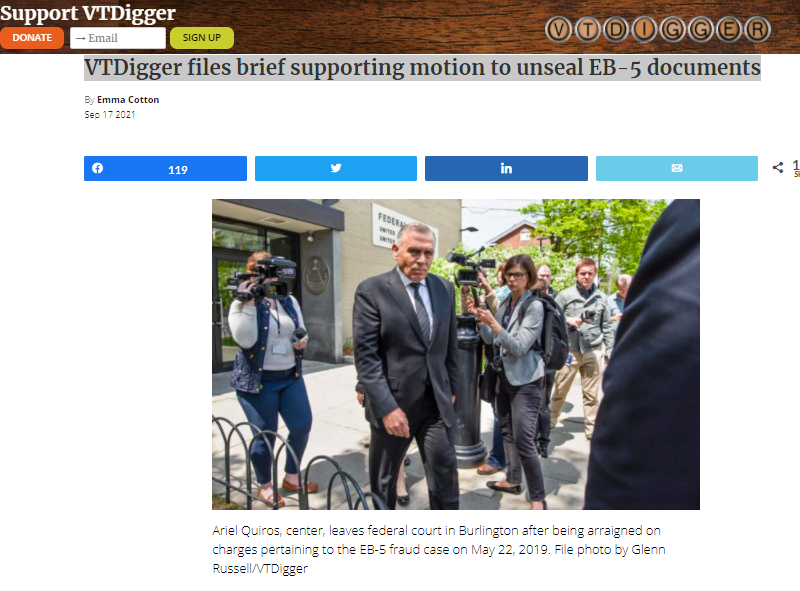 VTDigger has filed a motion asking the United States District Court to unseal documents that could further show the state’s involvement in the EB-5 scandal that marks the biggest fraud in Vermont’s history.

Existing documents, recently unearthed by attorneys representing Bill Stenger, the former president and CEO of Jay Peak Resort, show that state officials appear to have had knowledge of the fraudulent activity long before they informed investors and the public.

Stenger recently pleaded guilty to a felony charge for filing a false document to the federal government. He faces up to five years in prison, and his sentencing hearing will take place in early October.
An amicus brief filed by the statewide news organization supports a motion, filed by Stenger’s attorneys, that asks U.S. District Court Judge Geoffrey Crawford to unseal dozens more documents that may further implicate state officials in the case.

Amicus briefs are filed by people or groups that are not directly involved within a given court case but have an interest in the matter and hope to sway the judge’s decision.

Attorneys with the ACLU Foundation of Vermont and Cornell Law School First Amendment Clinic filed the brief on behalf of The Vermont Journalism Trust, the nonprofit parent organization of VTDigger, on Wednesday.

“Although Stenger argues that the documents offer mitigation factors to consider in determining his sentence,” that issue is not VTDigger’s focus, the brief read.

Rather, the documents that Stenger seeks to unseal contain matters of “great public interest,” lawyers representing the news organization wrote in a motion for leave to file the amicus brief.

Among those matters, the documents include FBI interviews about a conversation that took place during a secret meeting between former Gov. Peter Shumlin and Ariel Quiros. Quiros is the former owner of Jay Peak Resort and the man who federal and state officials say is responsible for fraudulently using millions of dollars from immigrant investors.
Pieces of FBI records that detail the meeting became available only recently when Stenger’s attorneys included them as exhibits to a motion filed in federal court. The records are sealed but were quoted in the motion, according to recent reporting by VTDigger.

The records show that Quiros met Shumlin on New Year’s Day in 2015 at Shumlin’s home in East Montpelier. Qurios told the FBI he and Shumlin discussed “all of the problems at Jay Peak” and that Shumlin was interested in information about an apparent arrest in China of a Vermont EB-5 Regional Center employee.

While Quiros told investigators he met with Shumlin for five hours, Shumlin told the feds they met for 20 minutes.

“These documents appear to shine a light on the critical question of when the State became aware of the largest financial fraud in Vermont’s history and what actions state officials took in the months before publicly filing a related state securities action,” the brief read.

Attorneys for VTDigger make three arguments for the unsealing of the documents. First, sentencing proceedings and documents are subject to the First Amendment. Second, the public and the press have “vital interest” in the documents “to promote government transparency and to hold public officials accountable.” Third, the attorneys argue, the state cannot meet the requirements to justify sealing the documents.

“Journalists require access to judicial documents — like the sentencing documents that Defendant seeks to unseal in this case — to report on criminal matters, to hold government officials accountable, and to promote transparency in the judicial system,” the brief filed by VTDigger read.

VTDigger reporters, including founder and editor Anne Galloway, have filed “many public records requests” on the EB-5 fraud, including for the documents under seal, according to the brief.

“The State has repeatedly rejected or failed to fulfill the requests in full, forcing Amicus to file three Public Records Act lawsuits over the past five years seeking to vindicate the public’s right of access to these documents,” it said.

Crawford is expected to issue a ruling on the unsealing of records before sentencing in early October.