Indian investors worried over impending expiry of US golden visa 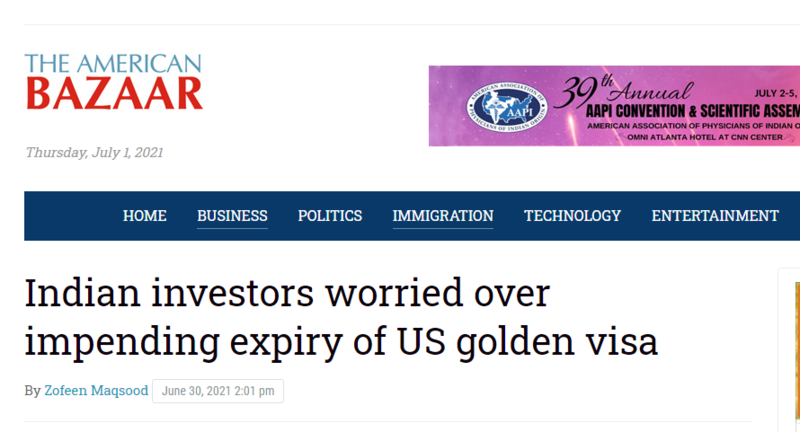 Fate of golden ticket to US through investment hangs in balance.

“The EB-5 program brings in too much money and creates too many jobs for politicians to discard it so easily,” says Duncan Hill, Marketing Manager, Davies & Associates, LLC.

An affluent business community in Surat, a commercial center for textiles in the west Indian state of Gujarat, has been anxiously waiting for news about the fate of EB-5 US investor visa.

For unless the Congress acts soon, the investor visa which had off-late become a golden ticket to the US for those who could afford it, is all set to expire on June 30.

Talking to the American Bazaar, Yogesh Bhai Patel, a small business owner in Surat who deals in precious gems, says, “Five years ago, a close friend of mine shifted to the US on a EB-5 visa.
“His son was already studying in the US and the younger daughter too wanted to study abroad. The family thought it will be best for them to use their savings and invest in a small business in the US. Since then, many business owners from our community have been exploring this route,” he said.

However, there has been a bit of an unrest due to recent developments leading to the legislative changes in EB-5 visa,

EB-5 is an immigrant investor visa to the US, that allows foreign investors to obtain permanent residency in the US, by investing at least $900,000. The program also allows for indirect investment through Regional Centers by way of pooled investments.

During the last Congress, the EB-5 extension was decoupled from other immigration legislation extenders changing the deadline to renew the program from Sept. 30 to June 30.
This essentially means that the EB5 Regional Center Program will be in limbo after June 30. What will follow remains uncertain. According to immigration attorneys there could either be a temporary pause of the program or it could be discontinued permanently.

Meanwhile, Final EB-5 Rule which increased the minimum investment amount from $500,000 to $900,000 was invalidated by a federal court in California on June 22, but without an injunction to prevent its reinstatement.

This provided an opportunity for Indian business owners to apply for direct EB5 with a lower investment of $500,000, the window to do so was really small. In the light of the above situation, what does the future of EB-5 look like?

Duncan Hill, Marketing Manager, Davies & Associates, LLC says, “This is a piece of legislative theatre from Senators with competing views of how they want the EB-5 program to look in future.”

“While this will mean a temporary lapse to the Regional Center program it will likely force a compromise between these different viewpoints once Congress returns from its recess.”

“The EB-5 program brings in too much money and creates too many jobs for politicians to discard it so easily. Direct EB-5 remains unaffected,” Hill noted.