Explained | What is the Regional Center Program of the USA's EB-5 visa scheme and why has it lapsed? 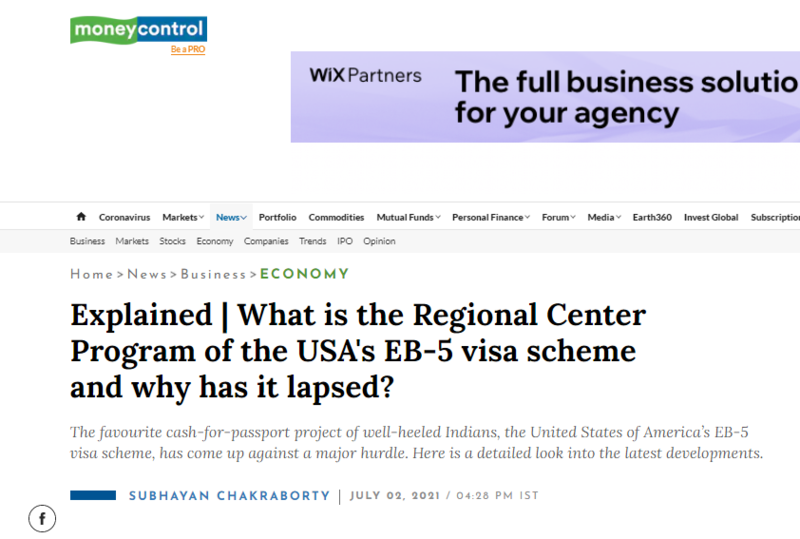 The pandemic may have hastened the quiet movement of Indians to foreign shores. However, well-heeled citizens had begun an exodus out of the country early on, aiming to secure citizenship in other nations through various forms of cash-for-passport schemes, according to media reports.

Prime among these has been the United States of America’s EB-5 visa scheme, which has gained popularity among those looking to skip the long queue of migrants to the US.

The previous administration of US President Donald Trump had made the terms of the scheme tighter.

Apart from a higher cost of investment, a further hurdle has now appeared in the form of a crucial chunk of the coveted scheme lapsing from June 30 onwards.

What is the EB-5 visa scheme?
The EB-5 visa programme offers foreigners the chance to become permanent US residents, provided they invest a minimum $900,000 in a government approved EB-5 business or create 10 full-time jobs in the country.

A total of 10,000 visas are up for grabs every year with no country allowed more than 7 percent of all visas, or 700 slots, in the first instance.

While Chinese citizens had, for long, remained the top petitioners for this visa, applications from India had picked up dramatically since 2017 and have grown exponentially since then.

Industry insiders have pointed out that from roughly 300 applications in 2017, the number of Indian requests had risen to over 1,200 in 2018.
However, if applicants from a country cross the 700-person limit, they are put on a waitlist, which is the case for most Chinese citizens with whom the programme has been a smash hit since the beginning.

If there are slots remaining after applications close, waitlisted candidates are chosen. As a result, more than 85 percent of visas went to Chinese nationals till 2014.

India, breaching the annual national quota of 700 visas, has almost doubled the average wait time for an applicant to receive temporary residency approval from the earlier two years to now four years.

What is the Regional Centre Program?

The Regional Centre Program (RCP) allows EB-5 applicants to invest through an intermediary in the US. It facilitates investments in targeted employment areas, mostly in rural areas, where unemployment rates are 1.5 per cent higher than the US national average.

The RCP is an agency that has demonstrated to USCIS (United States Citizenship and Immigration Services) that it is working toward the EB-5 program goals of stimulating the U.S. economy through foreign investment and job creation, and that it is consequently qualified to receive capital from immigrant investors.

The RCP also remains by far the largest and most preferred channel within the EB-5 visa to invest through.

A report by the US Congressional Research Service, which works exclusively for the United States Congress, providing policy and legal analysis to committees and Members, reveals that in FY19, of the close to 9,000 EB-5 petitions received, at least 8,000 were filed at the regional centers.

How do Regional Centers operate?

Regional Centers are lucrative for US developers and businesses who get the advantage of tapping into major funds from EB-5 applicants. This source of inexpensive capital has led to the establishment of numerous Regional Centers across the country.

According to the EB5 Affiliate Network, indirect investment through an intermediary is easier for foreign investors since they don't have to deal with the paperwork themselves.

What has happened to it?

The US Senate is currently debating the EB-5 visa, especially the RCP, after senior members of the US Senate jointly pushed to increase transparency and amend the visa program owing to major allegations of fraud and corruption, which has led to funds dedicated for rural development being channelled into wealthy areas.

Uncertainty had gripped Indian investors since early this year, as even a short-term technical snag in the scheme may lead to significant extension of time to get the visa and US citizenship. The RCP lapsed on June 30.

Now, with the Senate currently in recess, the US Citizenship and Immigration Service has said no investment through the RCP will be accepted in the meanwhile.

It has also said pending applications (I-924 and I-526) will be kept in abeyance during the lapse period until further notice.

While the overall EB5 scheme remains active, the latest development is set to extend the waiting period for investor applicants who had already put in money.

What happens now to Indian applicants?

Applicants would now have to wait until 12 July when the US Senate reconvenes. However, the proposed changes to the EB-5 visa program are expected to come up against tough opposition, which may further complicate matters.
While the scheme had been running since 1990, later amendments started the RCP. According to Invest in the USA, the national association of EB-5 RCP operators, the EB-5 visa scheme has till now facilitated $41 billion in capital investments into the US from across the globe and created at least 820,000 jobs American workers.

However, the latest developments will not affect the usual visa categories and the plans of international students, information technology employees seeking H1-B visas or those planning to visit the United States on a tourist visa.