Documents: State knew about EB-5 scheme when it greenlighted Burke and AnC Bio 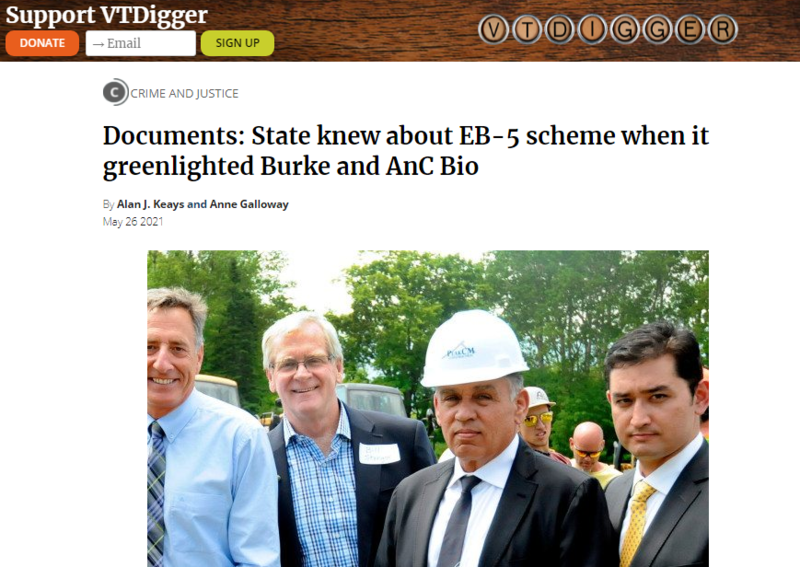 The Ponzi scheme wasn’t brought to light by federal regulators until April 2016.

However, state officials had indications of fraud in early 2015, but nevertheless greenlighted projects at Burke Mountain and in Newport. That meant dozens of foreign investors — on top of the more than 800 who had already invested in other Jay Peak projects, each putting up at least $500,000 in investments in Burke and AnCBio — were caught up in the fraud before the feds cracked down in April 2016.
Federal court filings show that two government agencies investigated the finances of the Jay Peak developers from the summer of 2014 to February 2015. During that period, two major projects — AnC Bio Vermont and Burke Mountain — had been suspended by the Vermont Regional Center, which is part of the Vermont Agency of Commerce and Community Development.

In the summer of 2014, ACCD hired outside counsel to investigate financial improprieties at the Northeast Kingdom ski area. The report to the agency from the law firm Lord Locke has never been made publicly available.

By November 2014, the secretary of the commerce agency was made aware that Quiros had leveraged margin loans against money from investors that was supposed to have been held in escrow. A month later, John Kessler, general counsel for the commerce agency, was subpoenaed by federal regulators.

Meanwhile, Gov. Peter Shumlin had asked the Vermont Department of Financial Regulation to take charge of the investigation of AnC Bio Vermont.

In early 2015, former Department of Financial Regulation Commissioner Susan Donegan identified violations of securities fraud, according to a court filing from investors. Then-Deputy Commissioner Mike Pieciak subpoenaed bank records showing that Quiros had illegally purchased the resort in 2008 using investor money that was supposed to be used for construction of the Tram Haus Lodge. Documents also showed Quiros later took out tens of millions of dollars in margin loans against EB-5 investor funds for seven other projects in the Northeast Kingdom.

Pieciak developed a “spaghetti map,” or flow chart, of misappropriations of funds tracked by the Department of Financial Regulation, and issued a Powerpoint in June 2015 showing that investor money for the AnC Bio Vermont and Stateside hotel and condo projects had been commingled and used to buy the Burke resort, Jay Peak investor funds had been misappropriated, and the Burke project was “mired in fraud,” according to court documents filed by Barr Law Group, which represents investors.

Despite an ongoing Securities and Exchange Commission investigation and material findings from two state agencies, Shumlin in March 2015 asked state officials at the financial regulation department, the commerce agency and the Vermont Attorney General’s Office to lift a hold on two of the last remaining projects — Burke Mountain and AnC Bio Vermont, a proposed biomedical research facility.

Shumlin, who had befriended Quiros and received campaign gifts from the Miami businessman, wanted to allow the Jay Peak developers to promote the projects overseas to investors and to begin construction on the Burke ski area hotel.

When Donegan released the “hold” on the AnC Bio Vermont and Burke projects, she required the developers to provide notice of a SEC “review” in offering documents given to investors. The language finally approved by Jay Peak’s attorneys downplayed the seriousness of the federal regulator’s involvement and asserted that the Department of Financial Regulation was ensuring “securities laws are being complied with and conducting a financial review of all EB-5 projects” — even though Donegan and Pieciak were aware that securities laws had been violated, documents show.

Filing criticizes Griffin
Donegan’s office coordinated with the Vermont Attorney General’s Office to monitor construction of a hotel at Burke Mountain. Bill Griffin, chief assistant attorney general, was the gatekeeper for the release of payments made to PeakCM, the contractor for the Burke project.

Griffin, who has since left the Vermont Attorney General’s Office, still plays a role in representing the state in a lawsuit brought against it by attorney Russell Barr on behalf of a group of investors.

In that lawsuit, Barr alleged the state officials overseeing the state-run regional center were either negligent in overseeing it or in cahoots with the developers.

As a result of Griffin’s role in charge of reviewing payments for the Burke project and his involvement in other aspects of the state’s review of the developments, Barr recently filed a motion to have him disqualified from representing the state, since Griffin is also a witness in the case.

“In the end, the Vermont Regional Center, joined by Assistant Attorney General William Griffin and the DFR, ensured that Vermont contractors and employees would be paid at the expense of the investors,” Barr wrote in the filing.

“However noble they thought their cause, the true saviors of Vermont wages were the defrauded investors who unwittingly put their money into a Ponzi-scheme and drowning immigration endeavor,” Barr’s filing added. “And because Attorney Griffin (and others) was a direct participant in the various actions and failures leading to the investor’s losses, the Plaintiff investors hereby move for disqualification.”

Stenger wants secret report
Stenger’s attorneys are engaged in their own battle with the state over records that have been kept under wraps. They are seeking the records through a flurry of court filings they say could help prove their client’s innocence in his upcoming criminal trial this fall.

Assistant Attorney General David Groff argued — in a filing seeking to quash the subpoena for records filed by Stenger’s lawyers — that the information they are seeking is protected by attorney-client privilege and should not have to be turned over.

That includes the highly secret report from the Lord Locke law firm and communications associated with it.

Assistant U.S. Attorney Paul Van de Graaf, in a filing on behalf of the federal prosecutors who have brought a criminal case against Stenger and Quiros, questioned whetherStenger’s lawyers are seeking the information to share with Barr in his state civil case.
The Vermont Attorney General’s Office has been fighting providing information to the attorneys for the investors in that legal action.

Brooks McArthur, one of Stenger’s lawyers, has said he wasn’t sure if he would share with Barr any information obtained through subpoena. But, McArthur said, he didn’t think it was proper that he be blocked from sharing material gathered from his own investigation.

Stenger’s attorney also said Barr and Stenger do not have common interest and have entirely different views about the actions of the regional center. A main part of Stenger’s defense is that he relied on the state’s oversight to ensure fraud didn’t occur, while Barr contends that the state’s watch over the regional center was lax, at best.

State oversight
The documents being sought will shed new light on the “rigorous state oversight” between July 2014 and March 2015, Stenger’s attorneys wrote in a filing. That’s when Donegan, the state’s Department of Financial Regulation commissioner at the time, approved amended investor offering documents for the AnC Bio project and authorized Stenger and others to continue to solicit funds for it.

At his criminal trial, Stenger’s lawyers added, the prosecution will  “undoubtedly” claim that their client tried to mislead investors about the EB-5 projects.

However, his attorneys wrote, the evidence will show that state officials engaged in “hands-on rigorous scrutiny” of the projects, including how they were financed and what happened to investor money.

In a filing this week, Stenger’s attorneys wrote that the state has given federal investigators a host of documents marked “privileged” or “confidential” but they can’t see what information they contain.

Those more than 50 documents include:

— Emails among members of an “exclusive” group of top state officials charged with overseeing the Jay Peak EB-5 projects.

— The analysis of data related to those projects by state officials.

— The state’s preparation for and response to Jay Peak litigation in state and federal courts.

Also, in October 2015, according to that recent filing, Assistant Attorney General Jon Alexander notified state officials that records related to Jay Peak needed to be retained under a “litigation hold notice.”

That notice itself, the filing stated, is marked “CONFIDENTIAL ATTORNEY-CLIENT ATTORNEY WORK PRODUCT.”

Stenger, Jay Peak’s former CEO and president; Quiros, Jay Peak’s former owner; and William Kelly, a key adviser and longtime friend to Quiros, were all indicted on fraud and false statement charges in May 2019 for their alleged involvement in the failed AnC Bio project.

The project never got off the ground even though Stenger, Quiros and Kelly raised more than $80 million for it from foreign investors through the federal EB-5 visa program. Foreign investors who put at least $500,000 into a qualified job-creation project were eligible for permanent U.S. residency, provided the jobs were actually created.

Both Quiros and Kelly have reached plea deals with prosecutors and are awaiting sentencing. Stenger has maintained his innocence and is awaiting a trial this fall.

A hearing in Stenger’s criminal case — involving his attorneys’ requests to subpoena documents they say will aid in his defense — is set for Thursday in federal court in Burlington.