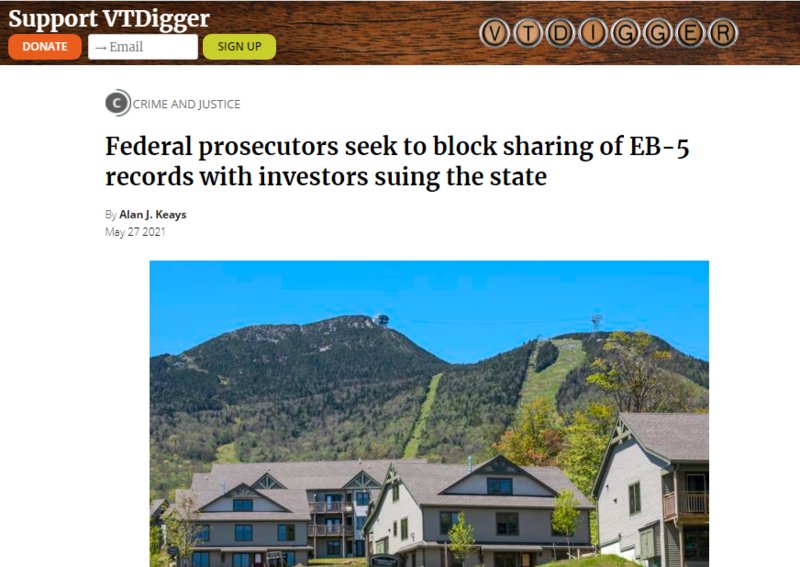 Federal prosecutors are pushing to keep the defense team for the indicted former Jay Peak president from sharing documents with an attorney who represents investors who are suing the state government.

The Vermont Agency of Commerce and Community Development and two former Vermont Regional Center directors have been sued for their alleged role in a financial scandal that played out in Vermont’s Northeast Kingdom.

That civil case, which has been pending for nearly four years, has been slowed because the Vermont Attorney General’s Office has delayed and blocked requests for records by Russell Barr, the attorney for the investors.
Assistant U.S. Attorney Jessee Alexander-Hoeppner raised the issue during a hearing Thursday in federal court in Vermont held over video.

The proceeding took place in the criminal case against Bill Stenger, Jay Peak’s former CEO and president. He is facing charges for his alleged part in a failed biomedical research project in Newport that never got off the ground despite raising more than $80 million from foreign investors through the federal EB-5 visa program.

“We think it would be appropriate to discuss either in a filing or at a future hearing the treatment of any document,” Alexander-Hoeppner said during the hearing. “This is an issue that, obviously, the government has raised with the court on a previous occasion.”

Prosecutors brought up the matter of the defense sharing records at a prior hearing. Since then, Alexander-Hoeppner said Thursday, some of the prosecution’s phone interview reports turned over to Stenger’s defense team have been referenced in public filings in the civil case against the state.

“We would want to have an opportunity to discuss how any documents produced going forward should be treated,” Alexander-Hoeppner told the judge.

Assistant U.S. Attorney Nicole Cate, another prosecutor in the case, told Judge Geoffrey Crawford that she thought the parties understood that the documents were to be held under a previous protective order.
She said it appeared Stenger’s lawyers had a different “interpretation.”

“Until recently, we thought that issue was settled,” Cate said, “but we may bring something else to the court to get a more concrete order in place.”

Brooks McArthur, an attorney for Stenger, said after the hearing Thursday he couldn’t comment on whether he shared any documents.

“I don’t think there is any prohibition under the protective agreement if we are engaging in our investigation to share documents in a sense that we allow somebody to review something and answer our questions,” he said. “We certainly aren’t providing copies of documents or releasing custody of documents.”

Reached Thursday after the hearing, Barr declined to say if any documents from Stenger’s legal team have been shared with him. He did take aim at federal prosecutors for trying to block that from happening.

“It is unfortunate that the U.S. prosecution is trying to interfere with the victims’ efforts to get to the truth,” he said in a statement. “These actions defy the rule of law and common sense. But no matter what, the evidence will come out.”
Also at Thursday’s hearing, a request from Stenger’s defense team seeking subpoenas for records from the state was resolved. His attorneys said they believe now they already have the documents they were seeking.

“We’re exceedingly happy and pleased that we have all of these critical documents that show, that prove, our point that the state was trying to enforce rigorous standards over the EB-5 projects,” David Williams, an attorney for Stenger, told the judge.

“And in March of 2015 after doing all of this review,” he said, “[the state] gave the green light to the AnC Bio project which is at the heart of the government’s case against Mr. Stenger.”

Stenger’s defense team has argued that because of the “rigorous” state oversight of the project, there is no way that their client could have “hoodwinked” state officials and committed the fraud as alleged.

In fact, documents filed in the case reveal that, as far back as 2014, state officials raised concerns about the AnC Bio project, as well as others headed by Stenger and his then-business partner, Ariel Quiros, Jay Peak’s former owner.

But after a review, the state still agreed to allow the projects to move forward and Stenger and Quiros to solicit funds from EB-5 foreign investors for the biomedical research facility project, known as AnC Bio Vermont.

Of particular interest to Stenger’s defense lawyer are documents related to an outside review that took place to investigate financial improprieties associated with the EB-5 projects led by Stenger and Quiros.

That review was conducted by the law firm Locke Lord, hired by the state, and has remained secret, though information from it had been included in emails provided to Stenger’s defense team from state officials seeking information about the EB-5 projects at that time.
At the hearing Thursday, Assistant Attorney General David Groff, representing the state, told the judge there was never a final report from Locke Lord and that information about the review has previously been provided.

“That document was produced,” Groff said. “I’m not aware of any final version of that.”

Crawford said, as a result, the issue of the subpoena was moot.

“I think the cat is out of the bag,” Crawford said. “I think the report got out, regardless of privilege or the subpoena process, just through discovery.”

McArthur agreed, adding that prior to the hearing he wasn’t aware that there was no final report prepared by the law firm.

“As long as we can rest assured knowing there’s no kind of final report floating out there,” he said, “we’re fine moving on.”

Stenger, Quiros, and William Kelly, an adviser to Quiros, were all indicted in May 2019 for their alleged participation in AnC Bio Vermont, which federal regulators said was “nearly a complete fraud.”

The developers raised $250 million through the federal EB-5 visa program for massive upgrades at the Jay Peak Resort.

The alleged “Ponzi-like” scheme began to unravel with the undertaking of the collapsed AnC Bio project that raised more than $80 million from more than 160 foreign investors seeking green cards through the EB-5 investment program. Despite the money raised, the developers had little to show for it.

Quiros and Kelly have since reached plea deals with prosecutors and are awaiting sentencing. Stenger stands trial in the fall.

McArthur said, after the hearing Thursday, that while the document issue has been resolved, there are still unanswered questions.

“What will be left is we call witnesses at trial that are or were state employees at the time and ask them questions, they may invoke some kind of privilege,” he said. “We want to work that issue out in advance.”

That issue was put off at Thursday’s hearing.