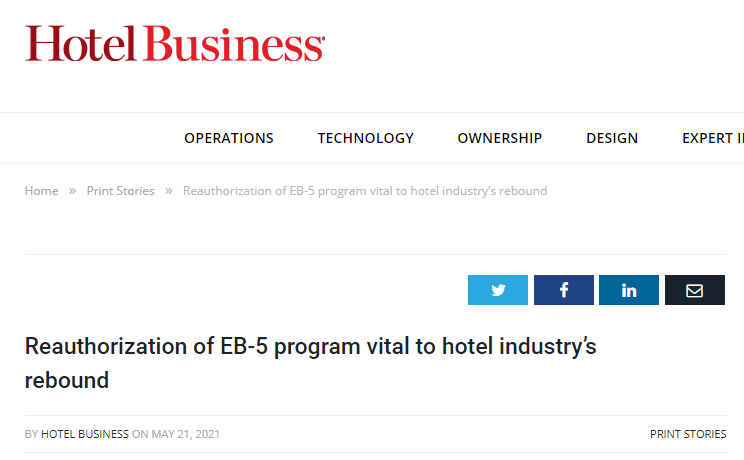 Since its inception in 1990, the EB-5 program has served as a gateway for qualified foreign investors who must meet specific capital and job creation requirements to obtain permanent U.S. residency. In 1992, Congress created the Regional Center Program allowing designated “regional centers” to pool these investments and leverage them with other capital to create jobs through a myriad of successful economic development initiatives. The Regional Center Program became a catalyst for hundreds of projects and hundreds of thousands of jobs, and was an impactful part of the country’s economic recovery after the 2008 recession. Now, this job-creating success story is set to end in less than 65 days, on June 30, unless Congress reauthorizes it.

The EB-5 Regional Center Program has provided more than $41 billion in capital investment from across the globe to fund various developments and to support American businesses—all at no cost to the U.S. taxpayer. This capital deployment and resulting projects created at least 820,000 job opportunities for U.S. workers—vital contributions especially following the 2008 recession.

More specifically, the program has a proven track record of bolstering the commercial real estate industry. Between 2010 and 2015, it deployed $10 billion to fund commercial construction which accounted for 60% of all EB-5 funds invested in the U.S. during that time period. In 2014 and 2015, the EB-5 capital funding for commercial construction was solely responsible for an estimated $6.1 billion, resulting in a more than 600% increase from 2010 to 2011. In addition, non-construction-related sectors with significant EB-5 capital investment during the same period included hotels and restaurants (an estimated $1.2 billion); real estate (an estimated $540 million); retail and wholesale trade (an estimated $516 million); and architecture, engineering and related services (an estimated $412 million).

Hotels have long been considered the darling of EB-5 financing among foreign investors due to a variety of reasons, including their tendency to create more jobs than other types of real estate development projects. Additionally, after the Great Recession, real estate financing became abundant for most classes of real estate, except hotel development. As a result of the limited financing available for hotel construction, hotel developers have turned to EB-5 financing to help fill in their capital stack.

However, EB-5 investments are not limited to new construction. For hotels and, in fact much of the hospitality industry, EB-5 investments may also be a lifeline for established businesses feeling the hard pinch of the COVID-19 economic downturn. Although admittedly harder to facilitate, federal regulations allow EB-5 investments to bolster distressed or struggling businesses. The rules define a distressed or struggling business as: a) in existence for at least two years, and b) incurred net losses over the prior year of no less than 20% of the business’ worth. Further, although an immigrant investor may be inclined to help a troubled business because of the relative ease in demonstrating job creation or preservation, he may also hesitate to invest in an already struggling project. Either way, the opportunity is there, for now, and can be very impactful for both the investor and the hotel, restaurant or other “troubled” business.

History tells us the program is not in jeopardy. In fact, it has been reauthorized almost pro forma 19 times as part of either the Department of State’s or the Department of Homeland Security’s annual spending measure. This time, however, reauthorization is tenuous. At the end of 2020, the Regional Center Program’s traditional reauthorization language was “decoupled” from its traditional spending bill. This means the program is not only set to technically expire on June 30, but it also lacks the assuredness provided by a must-pass appropriation bill.

For many reasons, however, this may be the best thing to ever happen to the Regional Center Program, for the economic development projects it ignites and for the immigrant investors who provide the fuel to create so many U.S. jobs.

Recently, Senators Chuck Grassley (R-IA) and Patrick Leahy (D-VT) introduced S.831, the EB-5 Reform and Integrity Act of 2021, which is a bipartisan bill that protects investors, assures the program’s integrity and secures its longevity.

Losing this source of capital will surely create challenges. In particular, the hotel and lodging industry may suffer significant setbacks. Without EB-5 funding, the industry’s efforts to aid in the economic recovery would  be hamstrung.

Ironically, jettisoning the Regional Center Program from its safe appropriation bill moorings and sure-fire reauthorization may be the one thing to keep the investments coming. Along with pro-forma reauthorizations comes pro-forma policy. Nothing changes. But the program needs change. It needs increased “integrity measures” to help protect against the fraud and abuse brought on by one too many bad apples. It needs provisions to protect good-faith investors who, through no fault of their own, may find themselves in a terminated project that needs stability— the kind of stability that can only come from a long-term, five-year reauthorization.

Support among the hospitality industry’s largest associations has steadily grown in recent months, with the American Hotel & Lodging Association (AHLA), AAHOA and the Latino Hotel Association (LHA) all lending their support to the reauthorization of the Regional Center Program.

With travel not expected to return to pre-pandemic levels until at least 2023, it’s critical that Congress reauthorizes the EB-5 investor program, which has proven time and again to be good for the hotel industry and our economy—providing a significant source of financial support for hotels and hotel jobs at a time its needed most.