Lawsuit challenges Trump-era EB-5 visa changes. What would it mean for investors? 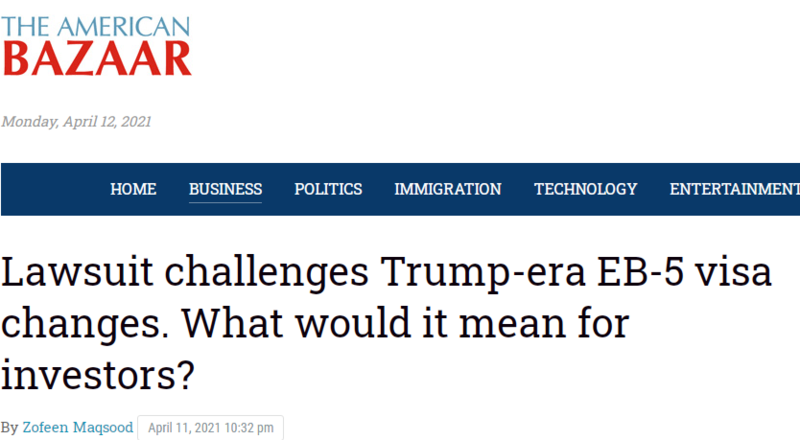 Trump-era EB-5 investor visa program changes could be reversed by a federal judge, who is overseeing a lawsuit by Behring Regional Center. (Regional centers are USCIS-designated economics that promote economic growth in the United States through the EB-5 program.)
Among the potential changes include rolling back the investment amounts from $900,000 to $500,000. Behring claims that the Department of Homeland Security “violated federal law by issuing an arbitrary and capricious rule, failed to examine a regulatory flexibility analysis, and exceeded statutory authority,” according to court documents. A reversal would be great news for the EB-5 program, which has suffered considerably after the changes.

Among the potential changes include rolling back the investment amounts from $900,000 to $500,000. Behring claims that the Department of Homeland Security “violated federal law by issuing an arbitrary and capricious rule, failed to examine a regulatory flexibility analysis, and exceeded statutory authority,” according to court documents. A reversal would be great news for the EB-5 program, which has suffered considerably after the changes.

While a majority of Indian nationals arrive in the US on work visas such as H-1B and L-1, according to immigration attorneys, EB-5 remains a promising visa category for Indian nationals, especially since there huge waiting times for green cards in other visa categories. While the Covid-19 pandemic adversely affected EB-5 visa demand — only 4,000 EB-5 visas were issued in fiscal year 2020, compared to 9,478 in FY2019 — Indians still made up 17 percent of all EB-5 visas issued in 2020, next only to China. The numbers strongly suggest that the investor visa program, despite its heavy costs, remains a lucrative option for wealthy Indians.

What exactly is the Behring Regional Center lawsuit about? The American Bazaar caught up with Chicago-based immigration attorney Rohit Kapuria, who is a partner at Saul Ewing Arnstein & Lehr LLP.

Can you tell us about the proposed changes to EB-5 visas? Does it look likely that some changes put in place by the Trump administration may be reversed?

This is the second lawsuit challenging the implementation of the EB-5 regulations that became effective as of November 21, 2019 under the leadership of the prior Secretary of Department of Homeland Security (Chad Wolfe) who had oversight of USCIS during the Trump administration’s tenure. The EB-5 regulations made many changes but one of the most important issues, relevant to EB-5 investors globally, is that the minimum investment amount was increased from $500,000 to $900,000.  Following the effective date of the new regulations, there was a significant cooling of EB-5 demand. Coupled with the Covid-19 pandemic and some rough immigration rhetoric circulating in 2018/2019, the EB-5 numbers dropped.

Does the lawsuit seek to roll back all the changes?

The crux of the litigation challenge is that the two Secretaries of Department of Homeland Security (Kevin McAleean, under whose oversight the regulations were first proposed, and Chad Wolf, under whose oversight the regulations were then enacted) were not properly appointed to their posts. As such, the regulations that were then adopted should have no legal basis to be effective. If the judge, who will have the next hearing on May 6, 2021 (but who may also rule on the merits of the legal briefs) decides to rule in favor of the plaintiffs making the challenge, such finding could deem the November 21, 2019, to be invalid and no longer applicable (whether this means the regulations are immediately struck down or whether they wind down in some other fashion). The implications are that we, theoretically, could find that the EB-5 investment amount could return to a $500,000 threshold. Such return could be temporary until the Biden administration will likely look to re-enact the regulations again. The question then is if we return to the $500,000 level, how long would it hold for?

While EB5 is an emerging visa category, most Indians arrive in the US on L1 or H1B visa. Do you feel the changes would help Indian investors and if yes why?

The price tag for EB-5 at $500,000 or $900,000 is high. The demand for H1, L1s and other dual-intent statuses will remain high for Indian-born petitioners. One primary reason, however, that the Indian-born demand for EB-5 took off in the last few years is that the wait times tied with the H1-B under the EB-1, EB-2 and EB-3 categories (for permanent residency) were getting longer and longer. As such, Indian born applicants started turning towards EB-5 as a secondary option to acquire permanent residency on a more palatable timeline (2-3 years on EB-5 vs. 10+ years, for example, under EB-2).