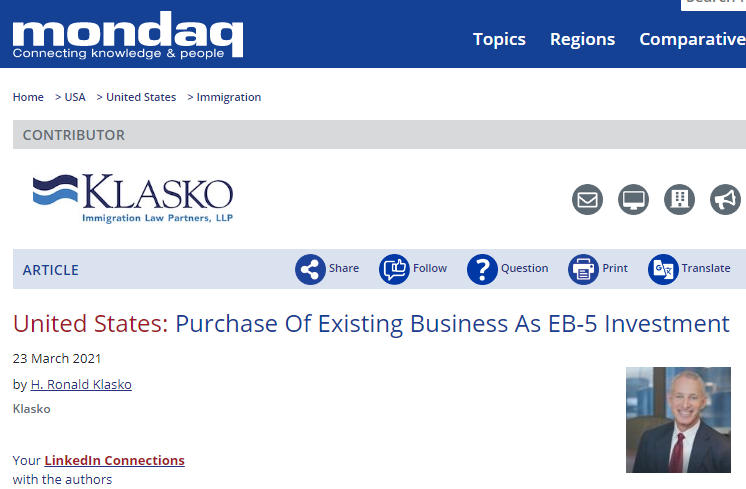 When and under what conditions can the purchase of an existing business qualify an investor for EB-5 purposes? Although the question is rather basic, the answer is rather elusive.

In fact, USCIS has studiously avoided answering this question and has failed to elucidate any standards or guidance which can be used to advise investors. Both anecdotally and based on reported cases, very few purchases of existing businesses have resulted in approved EB-5 petitions.

The purpose of this article is to review and analyze existing law and suggest guideposts for both USCIS and counsel to use in evaluating these cases.

INA § 203(b)(5)(A) provides EB-5 classification to aliens investing the requisite amount of capital in a "new commercial enterprise" that will create full-time employment for 10 US workers.  We will evaluate the purchase of an existing business both for its qualification as a "new commercial enterprise" and for its qualification as creating the requisite employment.

Create an original business;
Purchase an existing business and "simultaneous or subsequent restructuring or reorganization such that a commercial enterprise results;"
Expand an existing business such that a 40% increase either in the net worth or the number of employees results.
Is it significant that, although the third option (expansion) in the regulation expressly requires creating full-time employment for 10 qualifying employees, the second option does not have such an express requirement?  USCIS apparently does not think so.

The focus of this article is on the second option, which by its very terms does not require a 40% increase in net worth or number of employees.

The other option for the purchase of an existing business is the purchase of the stock of the business.  When that happens, the business remains the same entity but just with a different owner.  The question is whether a "new commercial enterprise" results, after which we must analyze whether the requisite employment was created.

In order for the purchase of the stock of an existing business to qualify as a new commercial enterprise, the business must be "restructured or reorganized such that a commercial enterprise results" (unless, of course, the investment results in meeting the 40% expansion test).  One searches in vain for a definition of this phrase in the EB-5 regulations.

Without such a definition, EB-5 adjudications appear to write out of the regulations the purchase of a business that is not an expansion and not a troubled business.  This article will attempt to fill that vacuum.  We will do so through the use of three examples:

Example 1:
Mr. Chen buys the stock of Wang's Chinese Restaurant.  He continues to run the restaurant (perhaps he changes the name to Chen's Chinese Restaurant), using the same basic menu and not expanding the business in any way.  We might agree that such an investment does not qualify as a "new commercial enterprise."

Example 2:
Mr. Chen buys the stock of Wang's Chinese Restaurant.  He changes the restaurant from a mostly fast food and take-out restaurant to an upscale Chinese and Asian food restaurant.  He engages in no corporate restructuring.  Whether this qualifies as a new commercial enterprise depends upon whether the facts constitute "reorganization such that a new enterprise results."

The petitioner has not shown the degree of restructuring and reorganization required by 8 C.F.R § 204.6(h)(2); the hotel has always been a Howard Johnson and is still a Howard Johnson today.  A few cosmetic changes to the decor and a new marketing strategy for success do not constitute the kind of restructuring contemplated by the regulations, nor does a simple change in ownership.  Therefore, it could not be concluded that the petitioner has created a "new commercial enterprise."

In other words, the Soffici facts really fit within Example 1 above.

The only non-precedent AAO decision of which this author is aware that found a qualifying reorganization is an AAO decision from July 11, 2001 (copy of decision available with the author).  In that case, the enterprise bred and sold a few untrained horses to trainers.  The investor who purchased the stock of the business provided a business plan involving running a breeding and training program and selling well trained dressage and show jumping horses with a considerable value.  The investor hired trainers and contracted for significant construction of training facilities and employee housing.  The AAO held that the investor had "fundamentally restructured and reorganized" the farm "such that a new commercial enterprise resulted."  The AAO stated:

"The breeding and sale of a few untrained foals to professional trainers hardly compares to the major breeding and show training business contemplated in the petitioner's business plan, which is in the process of being implemented.  The proposed business reflects a clear change in mission and dramatically expands the services of .the farm.  In addition, {the investor} not only obtained land use rights.but he also purchased additional farm land.. As the evidence demonstrates a qualifying restructuring, we conclude the petitioner has established a "new commercial enterprise."

Although this is a non-precedent decision, it appears to be all we have to go on regarding the mentality of the AAO on this subject.  The AAO appears to be looking for "a clear change in mission" and "a dramatic expansion of services," even without any formal corporate restructuring.  This contrasts with the "few cosmetic changes to the decor" and the "new marketing strategy" that failed in Soffici.  Using this analysis, arguably the clear change in mission of Mr. Chen from a primarily take-out and fast food Chinese restaurant to an upscale Chinese restaurant and presumably the expansion of services required in order to implement such a plan should qualify as creating a new commercial enterprise.

Example 3:
Mr. Chen buys the stock of Wang's Chinese Restaurant, continues to run it as Wang's Chinese Restaurant, but merges the company with another company that he owns.  Arguably this is not a reorganization, but is it a "restructuring?"  Neither the regulations nor any reported decision provides guidance on this question. The USCIS Policy Manual states that "a simple change of ownership" does not qualify as restructuring.

In the absence of any EB-5 law, we may look at other areas of immigration jurisprudence.  By doing so, we find that restructuring is defined as a merger or acquisition for purposes of successor in interest; E visa changes; H-1Bs; and I-9s.  Specifically, INA § 214(c)(10), which deals with successors in interest, explains that a corporate restructuring includes, but is not limited to, "a merger, acquisition or consolidation."  The E visa regulation, 8 C.F.R 214.2(e)(8)(b), includes a merger as a form of "restructuring."  The Department of Labor regulation at 20 C.F.R 655.730(e), entitled "Change in Employer's Corporate Structure or Identity" states: "Where employer or corporation changes its corporate structure as the result of an acquisition, merger, 'spin off,' or other such action," it need not file new LCAs and H-1B petitions.  If we want to go further afield, the IRS includes any change in identity, form or place of organization of a corporation as a "reorganization," 26 USC § 268.

Clearly using this analysis Example 3 constitutes the creation of a new commercial enterprise.

Now let's assume that the new entity created by the merger has 10 employees, all of whom were employed by the predecessor entity, Wang's Chinese Restaurant.  Is the employment creation requirement satisfied?  Arguably it is since the "new commercial enterprise" had 0 employees before Mr. Chen's purchase and has 10 employees now.  Would USCIS agree?  Although the strict language of the regulations is satisfied, there are informal indications that USCIS believes that there is an overriding, superseding, extra-regulatory requirement that the net impact of the investment must be expanding employment, even if the new commercial enterprise resulting from the purchase of the existing business meets the regulatory requirement by having 10 employees.  Such an interpretation would violate not only the regulations, but also the precedent decision Matter of Hsiung, 22 I&N Dec. 169 (1998) (purchase of existing business cannot result in "net loss of employment").

This article originally appeared on www.klaskolaw.com on July 24, 2009. It has been updated to reflect current immigration policy.

The content of this article is intended to provide a general guide to the subject matter. Specialist advice should be sought about your specific circumstances.