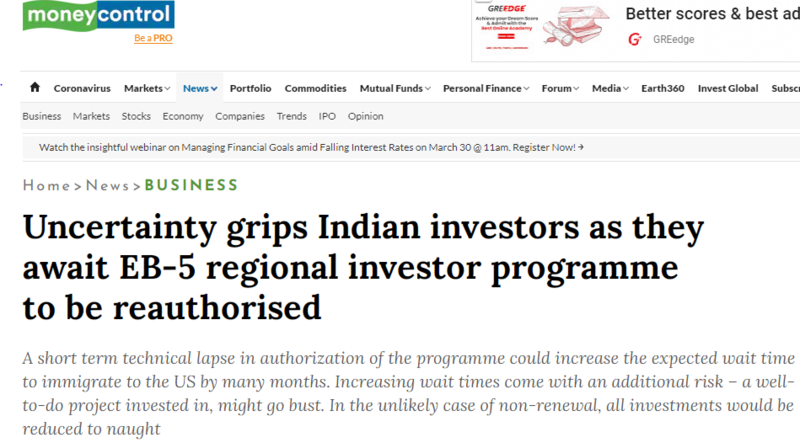 On March 18, Senators Chuck Grassley and Patrick Leahy introduced EB-5 Investor Visa Integrity Reforms in the US Congress. The bill will extend the expiring EB-5 regional center (RC) programme by five years and will also have stringent measures in place to address frauds and bring more credibility.

This, ideally, should make Indian investors, second largest in the EB-5 category, happy. But that is hardly the case. Uncertainty around the bill, coupled with longer wait times, has become a huge cause for concern for these investors, whose fate now hangs in balance.

EB-5 dates back to 1990. It allowed people to get Green Cards for investing directly in US businesses and creating at least 10 jobs. Another pilot programme, EB-5 regional center, was introduced in 1992, and was the most popular.
The report by US Congress think tank, Congressional Research Service, reveals that in FY19, of the close to 9,000 EB-5 petitions received, at least 8,000 were filed at the regional centers. Unlike investing directly, the latter allowed the centers to pool the investment money across projects and create more employment opportunities.

Over the last few years, the number of Indian investors taking the EB-5 route increased. While the visa might have been used by rich businessmen to get green cards in the initial days, the landscape has changed.

This, in part, is due to the increased wait times for those using the H-1B route. For many Indians who had to wait for decades to get a Green Card, EB-5 is an option if they can afford to invest. Currently, there are 8 lakh Indians who are in the Green Card queue and it would take 80 years or more for many to get permanent residency in the US.

So, many of the H-1B visa holders began to invest. Take for instance Sharan*, an H-1B visa holder who invested in EB-5 in 2018. He revealed that many of these investors now consist of professionals who have invested their lives’ savings to get the Green Card, which otherwise would take decades.

This rush has resulted in extended wait times for Indians. From nine visas issued in FY14, it went up to 760 in FY19. Indians became the second largest investor in the category with total EB-5 petitions standing at 6,000, next only to the Chinese.

If the time taken to get a green card using the EB-5 route was four years, it now stands at eight or more years for those who are applying now.

Deepak*, an EB-5 investor, explained that this longer wait time coupled with the regular lapse in between, is disconcerting and could put the investment in jeopardy.

This is not the first time that the programme is lapsing. Carolyn Lee, investment immigration lawyer, legislative counsel to Invest in the USA, a trade association, said that the RC programme was not a permanent one and was reauthorized periodically since iits introduction in 1992.

What has changed though was the term of its reauthorization. From a five-year period it started in 1992, to a few months and at times, weeks or even days. The shortest time period was two days between December 20 and 21, 2020 and the longest was five years between 1992 and 1997.

“Every time it lapses, it is stressful for investors like us,” says Deepak. “Imagine, you are investing $500,000 or $900,000 now, and the US immigration agency puts the processing on hold every few months. It causes huge anxiety for us,” he explains.

This also adds to the already increasing wait times to get the Green Card, a situation made worse by COVID-19.

Deepak applied for EB-5 in 2017 and got his petition approved in 2020. His interview, the last step in the process, is yet to happen with consulates closed and many working at limited strength due to the pandemic. “If the programme is not renewed, though unlikely, all my investments would be reduced to naught,” he laments.

Ishaan Khanna, Director of Investor Relations, EB-5 United, a US firm that advises people on their EB-5 investment, explained, “Every year, existing investors face the anxiety of this programme being stopped and their immigration process being halted.” Khanna, an EB-5 investor himself, would know.

According to him, even a short term technical lapse in authorization of the programme could increase the expected wait time to immigrate to the US by many months.

Increasing wait times come with an additional risk. A longer wait time would mean that the well-to-do project you had invested in might go bust as you wait for the visa to be processed. Naturally, add investors, “eight years is a long time.”

Sharan* had invested in a hotel project in New York under EB-5 in 2018. When COVID-19 broke out, the hotel industry was one of the worst hit. “Though I am positive that things would be better in the coming months, ambiguity remains,” he added. This optimism does not discount the fact that the investment and Green Card are interconnected.

This also means that they not only lose the chance to get their Green Card, there is a possibility of losing the money as well. For new investors, who would need to pay $900,000, there is a lot at stake.

Lee, the investment immigration lawyer quoted earlier, lays out three possible scenarios.
Bill gets approved before June 30 for five years
Authorized for a shorter period for few months
RC bill lapses
While the first scenario is ideal, there are possibilities that the bill could lapse or again be authorised for a shorter period of time. Deepak points out that the bill was just introduced and there is no surety on how long the process takes. That makes lapsing a possible scenario.

But if this bill does not pass before June 30, those in line to get the visa will be impacted as their wait times would further increase.

According to Khanna, if the bill is not prioritized, the country will fail to attract more investors. This would be an economic loss for the US. According to the Invest in the USA report, the programme generated $10.98 billion in capital investment and 3.5 lakh jobs between FY14 and FY15, which is the latest data available. These investments accounted for about two percent of the total foreign direct investment inflows.

“It is no secret that the number of incoming EB-5 investors has declined substantially since 2019 and it will continue to do so if the industry does not come together to advocate for a long term and stable immigration by investment programme,” he added. Sadly, it would also imply that the mighty Green Card will be losing some of its lure.