The pace of delivery is staggered to a point where new hotels will be added every year over the next five years, versus all at once. 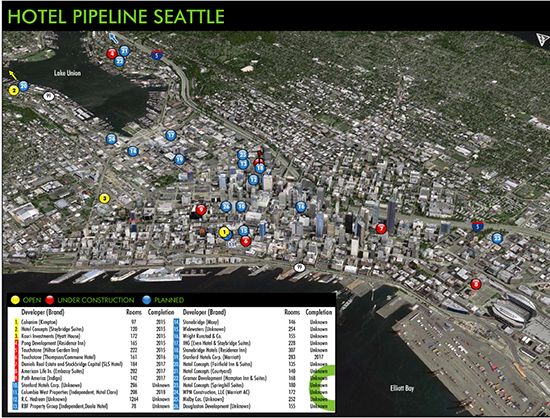 A few more projects have come about since this map was put together, including a conversion of the Lusty Lady on First Avenue into a 43-room boutique hotel.

As with all commercial real estate, trends in the lodging space are cyclical in nature.

By the end of 2015, the hospitality industry will have experienced unprecedented growth defined by all measures, including a national occupancy level never experienced before, average daily rates (ADR) growing at all-time highs and hotel transaction volume of $50 billion, surpassing the 2006-07 high-water mark.

Today we are looking at an industry that is hitting on all cylinders and experiencing record growth. Admired by Wall Street once again, the hotel space is flush with capital and Seattle is on the verge of adding an astonishing 4,000 new hotel rooms.

The 172-room Hyatt House, which debuted in May, is technically the first new hotel to open in this wave of lodging development. There have been a few new properties outside the core and one apartment conversion in March: the 97-room Palladian on Second and Virginia by Kimpton Hotels. But the tide is quickly changing and Seattle is on pace to open over 1,000 rooms in the next 12 months followed closely by an additional 20-plus projects either in the permitting process or approved and queuing to break ground.

Of the 29 projects CBRE Hotels is tracking in the Seattle CBD, it is interesting to note that only two of these proposed projects are over 300 rooms. This trend is generally the same in all large urban markets with the exception of those projects linked to, or associated with, a convention center expansion or development, such as R.C. Hedreen & Co.’s 1,280-room convention center hotel on the old Greyhound bus barn site.

Driving this trend of smaller developments is the prolific expansion of hotel brands that now number over 300. Marriott alone offers 19 different brands, and both Starwood and Hilton have added two new brands in the last six months.

Branding is just one of the reasons for new development opportunities. There are many others, including but not limited to, flow of institutional capital, low interest rates, and construction financing that includes EB-5 money and a relatively new number of overseas investors and sovereign funds.

The Federal Reserve recently noted that while the economy is still growing, the pace is moderating.

The housing market nationally and throughout the Northwest is strong with record volumes and pricing similar to those historic 2005-06 levels.

Post-recession economic growth continues to improve with stable GDP, a healthy labor market and steady growth in wages — all supporting improved occupancy and revenue in consumer-driven property sectors such as lodging.

Institutional capital continues to increase allocations across all real estate assets with both REITs and private equity reaching for higher returns and yields.

Foreign capital continues to look for safe harbors stateside, notably Asian capital looking for opportunities up and down the West Coast and in major metropolitan markets throughout the United States.

All these factors bode well for continued growth and strong yields in the lodging sector, specifically in Seattle.

How does this affect us?

As with any prolific development environment there is always a risk of oversupply. Looking solely at the amount of new supply in the Seattle CBD doesn’t take into account the roughly 45 additional projects we are tracking in Pierce, King and Snohomish counties, including eight in Bellevue with over 1,500 new rooms. You can look at just about any secondary or tertiary city around the Puget Sound and find a hotel project being developed.

Unfortunately, no one knows where we are in the current economic cycle or how much longer we have to enjoy the exuberance. But we do know that all good times come to an end and although we project continued RevPAR (revenue per available room) growth over the next 24 months, at some point there will be a downturn in this robust cycle.

Right now an improving macro-economic outlook is a good sign for lodging fundamentals, with continued growth in the labor market and accelerating personal incomes. We do see some headwinds including a strong U.S. dollar (less foreign travelers), weaker BRIC markets, continued Middle East turmoil, and pending interest rate increases the Fed has been debating.

These will surely have an impact on capital flows that in turn will hit the lodging market from several different angles.

Timing is everything in the development world and all of these projects will not be successful. Just like the last two cycles, there will be a few lodging developments that will not get the traction in the capital markets (debt) and will not be built.

Will they all get built?

Seattle is effectively sold out Monday through Thursday and ADRs continue to rise year-over-year, making it more difficult for the consumer to not only find a room but to afford a room. This leads to compression, where the consumer is forced to look outside the Seattle CBD in secondary and tertiary markets to find both availability and an affordable rate.

Summer creates an even greater challenge as the tourism season and increased cruise line business drives both occupancy and ADR, making weekend business as strong as mid-week business.

Continued expansion of the convention center will contribute to some very difficult challenges to accommodate not only the business traveler, but leisure, groups, sporting events and the ever expanding convention business.

Couple all this with 5 million square feet of office for one company (Amazon), over 40,000 apartments and all the ancillary amenities that go with those developments including restaurants, retail and transportation, and suddenly 4,000 new lodging units does not look that daunting. The Seattle CBD has the ability to absorb these rooms, but just as important the pace of delivery is staggered to a point where new facilities will be added every year over the next five years, versus all at once.

We continue to be moderately bullish on lodging development and expect continued merger-and-acquisition activity surrounding hotel brands, as well as growth in the hotel transaction market.

All of this activity bodes well for Seattle and the associated lodging markets.

In the end, no one can say with certainty where we are in the current economic cycle and how long the good times will last. Perhaps we will look back to recognize the inflection point where new supply of lodging rooms throughout the region helped facilitate the next downturn in the Seattle lodging market. But then again, maybe it won’t be supply that derails the current economic boom, but something more subtle and prolonged, or simply an unforeseen event that brings about the next general economic down cycle.

Until then, the Northwest and more specifically the Seattle hotel development market, is robust, if not downright interesting to watch. Consumers will soon find Seattle offering many new hotel brands with cutting-edge technology and engaging amenities while seasoned hotel owners, operators and developers should enjoy continued success for years to come.

Potala Tower in Seattle does not have permits to build itself as proposed.

The only permits are for grading and shoring. Even the permits to build a below grade garage have not been issued.

It would seem misleading to say that Potala Tower is under construction when there are no permits to construct this as proposed. Instead there are only permissions to move dirt around or haul it off site.

Do you mean this project: https://eb5projects.com/projects/160-potala-tower-seattle ?

The Potala Tower Seattle EB-5 Project consists of the development and operations of a new mixed-use property. Featuring a substantial underground parking structure and 40 aboveground stories, the 577,000-square-foot property consists of a hotel lobby, mezzanine, restaurant and wine bar, hotel rooms, residential apartments, as well as a rooftop deck. Designed to meet the Leadership in Energy and Environmental Design (LEED) Silver certification standard, the new mixed-use property incorporates ‘green thinking’ both in its design and development by increasing energy efficiency, decreasing operating costs, positively impacting the environment and improving the health of those utilizing the building.

Who is marketing this project?