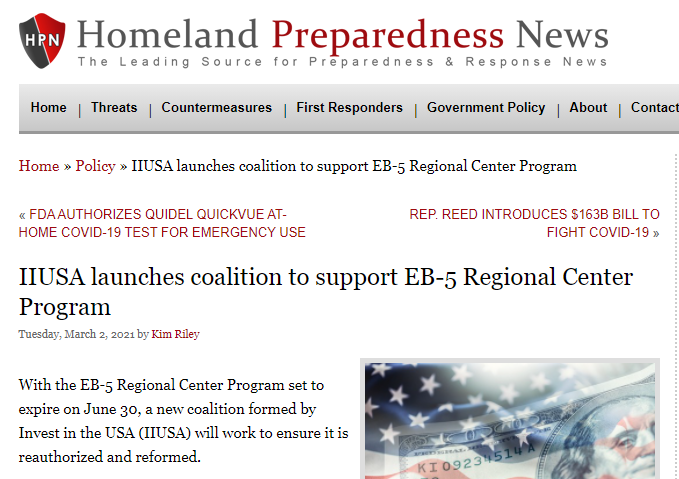 With the EB-5 Regional Center Program set to expire on June 30, a new coalition formed by Invest in the USA (IIUSA) will work to ensure it is reauthorized and reformed.

IIUSA, which is the nation’s sole non-profit trade association representing the EB-5 Regional Program, on March 1 launched the Coalition to Save and Create Jobs (CSCJ), which will “shed light on the significant impact the EB-5 Program has on the economy,” said Aaron Grau, executive director at IIUSA.

“Especially after such a difficult year, our country risks missing a critical opportunity to stimulate commerce and save jobs if the program is not reauthorized,” Grau said in a statement released on Monday. “Now is the time for federal policymakers to embrace what is proven effective.”

Specifically, CSCJ will advocate for the reauthorization of the EB-5 Regional Center Program through bipartisan legislation and policy reforms drafted by U.S. Sens. Chuck Grassley (R-IA) and Patrick Leahy (D-VT) that in part call for integrity measures to be implemented that would help reduce fraud and abuse in the EB-5 Immigrant Investor Program, also known as the EB-5 Program.

Congress created the EB-5 Program in 1990 to benefit the U.S. economy by attracting investments from qualified foreign investors seeking permanent U.S. residency. Under the program, each investor is required to demonstrate that at least 10 new jobs were created or saved as a result of the EB-5 investment, which must be a minimum of $1.8 million, or $900,000 if the funds are invested in certain high-unemployment or rural areas.

In 1992, Congress enhanced the economic impact of the EB-5 Program by permitting the designation of Regional Centers to pool EB-5 capital from multiple foreign investors for investment in economic development projects within a defined geographic region that are approved by U.S. Citizenship and Immigration Services, which oversees the program.

“IIUSA negotiated with Senators Grassley and Leahy to draft and enact the EB-5 Integrity and Reform bill,” Grau wrote in a Jan. 20 blog on the state of the EB-5 industry. “This included long-sought integrity reforms and a five-year reauthorization. Successful negotiations were completed but there wasn’t enough time to have it included in the omnibus bill” during the previous session of Congress.

Instead, the EB-5 Regional Center Program was reauthorized only until June 30, so IIUSA now is working with Senators Grassley and Leahy to have the reform bill reintroduced and passed into law before that expiration date, said Grau.

The program has been a tremendous success, according to IIUSA, with 95 percent of all EB-5 capital currently raised and invested by Regional Centers.

“One of the most important tasks as a mayor is to create jobs and economic prosperity for our local communities,” said CSCJ supporter Mayor Jason Cole of La Vergne, Tenn. “The EB-5 program is an economic powerhouse that infuses millions of dollars into a variety of industries at no-cost to La Vergne taxpayers and is critical to our growth.”