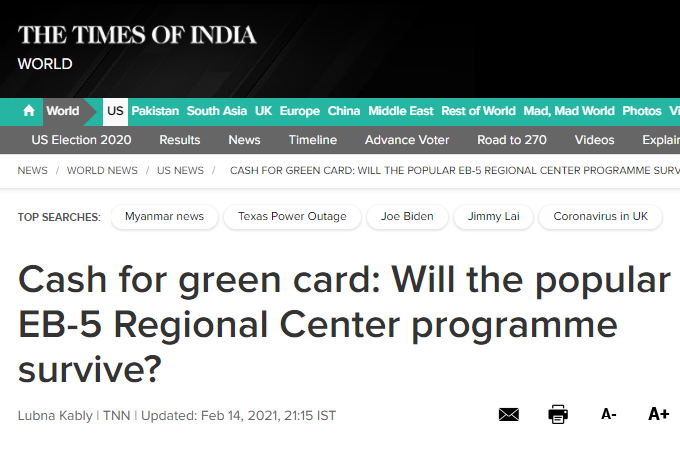 The EB-5 programme, popularly dubbed as the ‘Cash for green card’ programme, has been gaining traction in India and among Indians based overseas (mainly H-1B workers facing decades-long backlog for employment-based green card). Wealthy Indians use it as a quicker route to the US, especially if they are keen that their children should study and ultimately settle in the country.

Today, the Damocles sword hangs over the heads of investors as the Regional Center programme, that was instituted in 1991, is at risk of expiration. Time is running out and no one says it better than IIUSA, a dominant EB-5 regional center trade association.

In its message to stakeholders, IIUSA (Invest in the USA) emphatically states: "Be clear about this! If the EB-5 Regional Center programme is not reauthorised before June 30, it will cease to exist. Its elimination would leave thousands of good-faith investors uncertain as to their status at best and potentially without the immigration benefits they had sought in pursuing an EB-5 investment. Also significant for the future, the EB-5 Regional Center’s elimination would jeopardise funding efforts for economic development projects across the country – just when our country needs it most."

Between 2008-2015, the Regional Center programme is estimated to have pumped $20.6 billion into the US economy and created thousands of jobs for Americans.

Understandably, investors are worried that if the programme is not reauthorised the pending petitions may not be grandfathered and the money already invested may be stuck with regional centres.

The only hope lies in reauthorisation – and all hopes appear to be pinned on the EB-5 Reform and Integrity Act – a bill yet to be introduced in the Congress by Senators Chuck Grassley and Patrick Leahy.

Under the EB-5 programme, individuals can apply for lawful permanent residence in the US if they make the necessary investments and create at least 10 permanent full-time jobs for American workers.

The investors are granted conditional permanent residence (a conditional green card is given) for themselves, their spouse and children below 21. After two years, they have to apply for lifting of the "conditions". If approved, they get a green card which allows them to permanently live and work in the US.

Not more than 10,000 EB-5 visas can be allotted each year. Further, there is a country cap of 7%. However, if a country uses less than its allotted percentage, the remaining visas are made available to investors from other countries.

Rohit Kapuria, partner at Saul Ewing Arnstein & Lehr, a law firm, explains: “The EB-5 programme (meaning, the direct EB-5) is permanent and is not at risk. It is the Regional Center (pilot) programme, which was instituted in 1991, that is at risk of expiration. This programme has been subject to multiple extensions over the last few years. Previously, the extensions were lengthier, but in the last 6 years, it has been subject to several short extensions that were tied to the government’s budget appropriations process.”