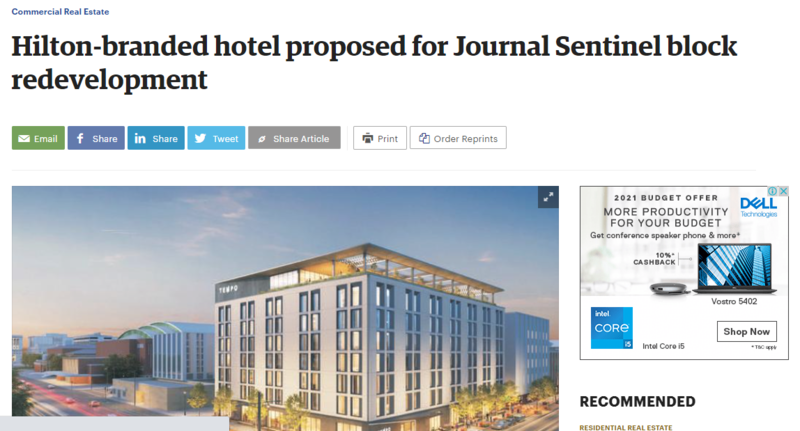 A 155-room Tempo by Hilton branded hotel could join the redevelopment of the former Milwaukee Journal Sentinel block in downtown Milwaukee, according to a marketing brochure seeking foreign investors for the project.

A parking lot on the southeast corner of the former Milwaukee Journal Sentinel complex would become a Tempo by Hilton hotel under a plan from HKS Holdings.

Located at the intersection of N. Old World Third St. and W. Kilbourn Ave., the hotel would overlook Pere Marquette Park and the Milwaukee County Historical Society. The Tempo brand from Hilton is the latest offering from the chain. Construction on the first hotel sporting this label broke ground in Louisville, Kentucky in March 2020. It is billed as an “elevated lifestyle brand” with upscale amenities.

The project site is part of a full-block site acquired by J. Jeffers & Co. in late 2019. The newspaper relocated to leased space in late 2020, and the developer has advanced two apartment projects. The signature Journal Communications Building, built in 1924, is being redeveloped into 103 market-rate apartments. The second project, immediately north of the hotel site, will create 77 apartments for students of nearby Milwaukee Area Technical College from a 1962 addition to the Journal building. Both projects are collectively known as Journal Square Lofts.

HKS, with FirstPathway Partners, is pursuing $21.6 million in EB-5 financing for the $48 million project. The EB-5 program, as of new 2019 regulations, allows foreign nationals to obtain a green card in exchange for a $900,000 investment that creates 10 permanent jobs in a “targeted employment area” where the census tract or those directly adjacent have an unemployment rate in excess of 150% of the national average.  The investment description estimates the creation of 513 total jobs, including 188 directly in the operation of the hotel and restaurants. Other jobs would be created indirectly by the hotel’s construction and operation.

Census tracts used to create the targeted employment area include the one encompassing the property in Westown as well as one consisting of most of the Menomonee Valley and another encompassing the King Park neighborhood just west of The Brewery District and Interstate 43. The unemployment rate in the latter two tracts is over 12%.