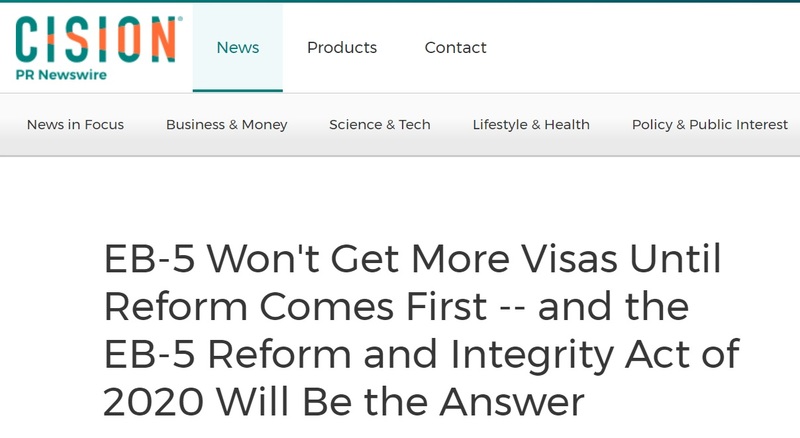 NEW YORK, Jan. 5, 2021 /PRNewswire/ -- The EB-5 industry — and investors worldwide — want more than the 10,000 visas the program is usually allotted each year. For that to happen, EB-5 industry reform must first be implemented.

There are 2 reasons why reform must come first:

It's the right thing to do. EB-5 is a much-needed economic-stimulus program that, from FY2010 to 2015, has generated $4.25 billion in capital investment and over 276,000 jobs for the U.S. economy. It can play a vital role in rebuilding America. But some bad actors who have misappropriated investor capital have tarnished the program name. Reform measures will protect all stakeholders and investors.
Reform will quiet the political naysayers who object to EB-5.
IIUSA (Invest In The USA) is the national not-for-profit EB-5 trade association and it firmly believes that the EB-5 Reform and Integrity Act of 2020, a bipartisan bill introduced by Senators Grassley and Leahy, is the answer. And it can be the stepping stone to increasing the annual quota of visas:

"With the EB-5 Reform and Integrity Act of 2020, the EB-5 program is in a stronger position to seek more visas in the next administration. Without reform, hope for visas in return for a promise of reform is not possible because legislators will oppose such a measure without reform which has been promised since 2015 but never realized."

If EB-5 matters to you, and you think that the program can help the U.S. economy, support the EB-5 Reform and Integrity Act of 2020.

Read about the bill's benefits, why IIUSA supports the bill, and a section-by-section breakdown of the bill here.