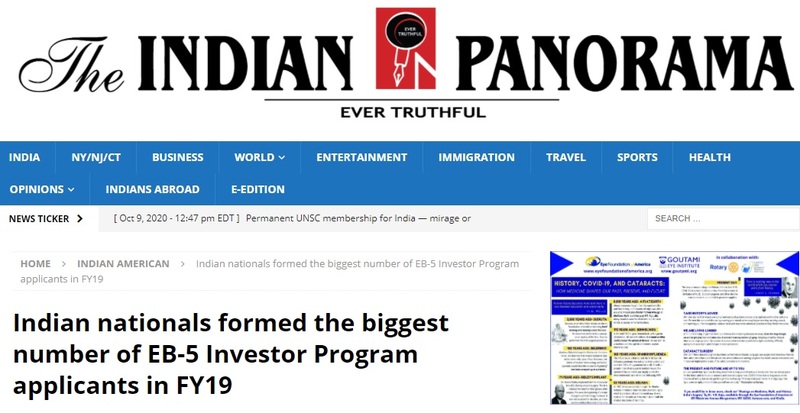 WASHINGTON (TIP): Indian nationals overtook those from China and Vietnam to file the highest number of EB-5 Immigrant Investor applications in the October-December and April-June quarters of fiscal year 2019, data sourced by non-profit Invest in the USA (IIUSA) showed.

The EB-5 investor program provides US citizenship to applicants once they invest $900,000 in any of a few specific opportunities. The investment amount was $500,000 before it was increased in November last year.

Demand for EB-5 visas, which provide applicants a direct path to US citizenship, rose 400% in India between 2016 and 2019, IIUSA said.

About a third of these applications were filed by Indians living in the United States to counter the excessively long green card processing times for Indian nationals, EB5 attorneys said.

Indians filed 756 applications in the two specified quarters in financial year 2019 – up 43% over the previous year – although there was a slump in visa filings in the first quarter of this fiscal (October-December 2019) due to the hike in the investment amount.

In comparison, there were 351 applicants from China and 240 from Vietnam, the two other big markets for the EB-5 investor program.

To be sure, the United States Citizenship and Immigration Services (USCIS), which follows an October-September financial year, does not make public investor data by nationality, but IIUSA was able to obtain the data under the US Freedom of Information Act, seeking the data only for the fiscal first and third quarters.

Immigration lawyers said Indian nationals who filed for EB-5 visas in the US could be at an advantage as there are no backlogs for Indians in this category.

“Current processing and absence of backlog is definitely good news for Indian EB-5 applicants. This means there won’t be any significant delay between I-526 approval and issue of the EB-5 visa on account of lack of availability of the latter,” said Vivek Tandon, CEO, EB5 BRICS, an immigration consultancy.

I-526 is the investor application form. Once approved, investors can file for consular processing.

The status is, however, unlikely to sustain for long as I-526 petitions filed before the increase in investment limit get processed.

Even in such a scenario, too, applicants staying in the US are at an advantage, said Poorvi Chothani, managing partner of immigration law firm LawQuest.

“Consular services haven’t resumed in India and most other countries, for many visa categories, so people can’t file their applications at present if they are outside the US,” she said.

Abhinav Lohia, Director-South Asia and the Middle East, CanAM Enterprises, said the EB-5 investment firm is “seeing more demand and they have filed a lot more applications in the last few months.”

However, the pool of investors with the ability to invest under the new rules is significantly smaller compared to the earlier set, he pointed out.

Still, the EB-5 investor program remains a popular option for people who want to secure their place in the US. H-1B visa holders in line for a green card opt for the EB-5 to ensure that their children do not have to leave the country if they age-out or turn 21 before their applications are processed. The program is also popular with parents keen on getting a green card so that their children have an easier path to colleges in the US as citizens.