Trump suspends immigration to the United States for 60 days 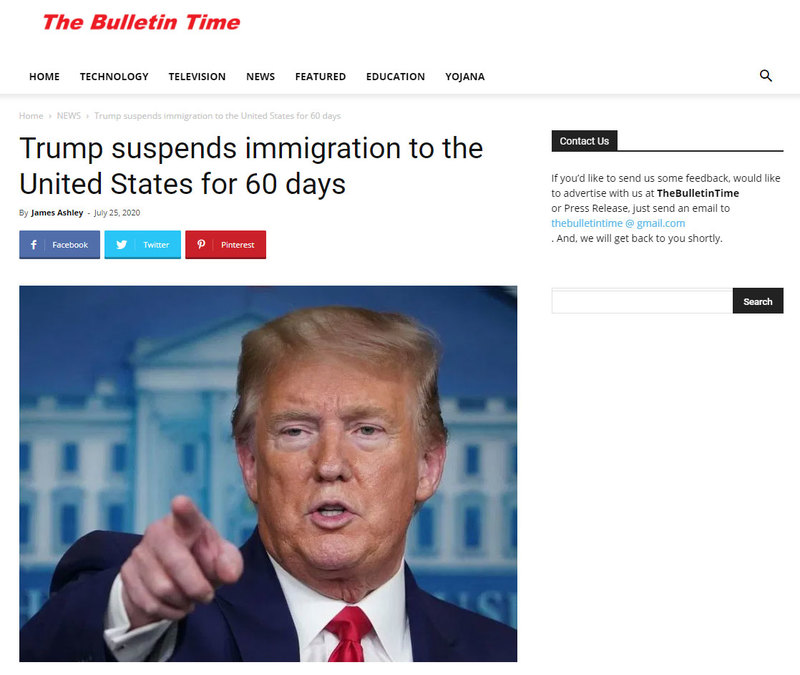 President Donald Trump at a recent press conference on the coronavirus crisis.

United States President Donald Trump signed an executive order suspending immigrants from entering the United States. The suspension will last 60 days, but could be extended.

Exempt persons are: legal residents (with Green Card); people from specific sectors who want to enter the country, such as health workers (doctors and nurses) or who carry out essential work in the fight against COVID-19 and their immediate family (under 21 years of age). Nor does it apply to spouses of US citizens, people with an EB-5 investor visa; biological or adopted children of citizens (under 21 years of age), among other cases related to diplomatic or national security matters.

People who are not in these categories will not be issued a visa to emigrate to the United States during this period.

On Tuesday, April 21, Trump said his government will suspend immigration to the country for 60 days, temporarily blocking people seeking residence through calls. Green Cards. The president said the measure is necessary to “protect American workers” from the crisis unleashed by the coronavirus pandemic.

“I am going to issue a temporary suspension of immigration to the United States,” Trump said at a news conference from the White House on Tuesday. “By putting immigration on hold, we will put unemployed Americans at the front of the line to look for work. It would be wrong or unfair for an American who lost his job to the coronavirus to be replaced by an immigrant worker who flew in from abroad.” The initiative was first announced in a tweet from the President on Monday, April 20.

“In the face of the Invisible Enemy attack, as well as to protect the jobs of GREAT American citizens, I will sign an Executive Order to temporarily suspend immigration to the United States,” Trump said in a tweet.

IN LIGHT OF THE ATTACK FROM THE INVISIBLE ENEMY, AS WELL AS THE NEED TO PROTECT THE JOBS OF OUR GREAT AMERICAN CITIZENS, I WILL BE SIGNING AN EXECUTIVE ORDER TO TEMPORARILY SUSPEND IMMIGRATION INTO THE UNITED STATES!

The United States has the highest number of reported coronavirus infections in the world, with 774,000 confirmed cases, up from 20,000 on April 20 alone. The deaths in the country exceeded 42,000 in total, that same day.

Trump’s action comes amid growing concern that the pandemic may have profound and prolonged effects on the economy. Some economists say the country is already in a recession, while others forecast a grayer future than that experienced during the Great Depression in the late 1920s and early 1930s. Some 16.8 million Americans have applied for government unemployment aid, while about 5.2 million joined the unemployment ranks just this week.

Under a March order from the Centers for Disease Control and Prevention (CDC), border officials have attempted to process migrants as quickly as possible at both land borders. The Trump government also announced that it would deny entry to certain immigrants, such as those seeking refuge in the country, using the executive power that allows it to deny entry to any foreigner that the government considers to be suffering from a communicable disease.