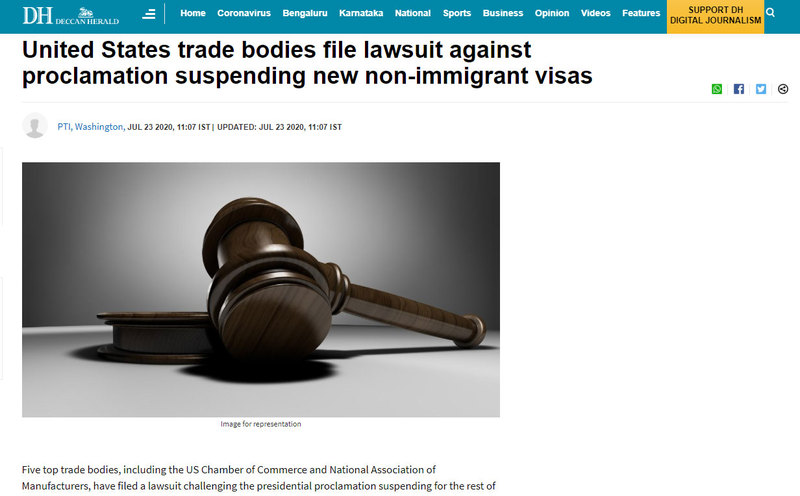 Five top trade bodies, including the US Chamber of Commerce and National Association of Manufacturers, have filed a lawsuit challenging the presidential proclamation suspending for the rest of the year new non-immigrant visas that include the H-1B, the most sought-after among Indian IT professionals.

In his proclamation last month, President Donald Trump banned the entry into the US of workers in several key non-immigrant visa categories, including the H-1B, arguing that they eat into American jobs during the Covid-19 pandemic.

The H-1B visa is a non-immigrant visa that allows US companies to employ foreign workers in speciality occupations that require theoretical or technical expertise. Companies depend on it to hire tens of thousands of employees each year from countries like India and China. Denying access to non-immigrant workers deprive American businesses of the talent they need. It also has far-reaching repercussions in today's competitive market for talent, said the lawsuit filed by National Association of Manufacturers, US Chamber of Commerce, National Retail Federation, TechNet, and Intrax.

The lawsuit seeks to overturn these sweeping and unlawful immigration restrictions that are an unequivocal "not welcome" sign to the engineers, executives, IT experts, doctors, nurses, and other critical workers who help drive the American economy, said US Chamber of Commerce CEO Thomas Donohue. "Left in place, these restrictions will push investment abroad, inhibit economic growth and reduce job creatioion,” he said. Ahead of the presidential proclamation, Donohue in a letter to the White House had said that there were many other sectors of US economy that rely upon the contribution of foreign nationals working in America.

One of the visa categories impacted, H-1B, is used predominantly by employers seeking to hire and retain individuals working in these fields, and in computer-related roles. Banning these individuals from entering the United States is thus not a to current unemployment levels, said the lawsuit. Businesses across industries are very concerned about the potential disruptions that will be caused if they can no longer employ valued employees that work here under the following visa classifications: H-1B, L-1, H-4, F-1 Optional Practical Training (OPT), and H-2B. Similarly, companies that rely upon investment dollars from the EB-5 Immigrant Investor Program are concerned about restrictions being imposed upon those individuals that have invested in their businesses. Shutting these individuals out of the chance to contribute to an economic recovery is misguided for a host of reasons, Donohue said. National Association of Manufacturers Senior Vice President and General Council.