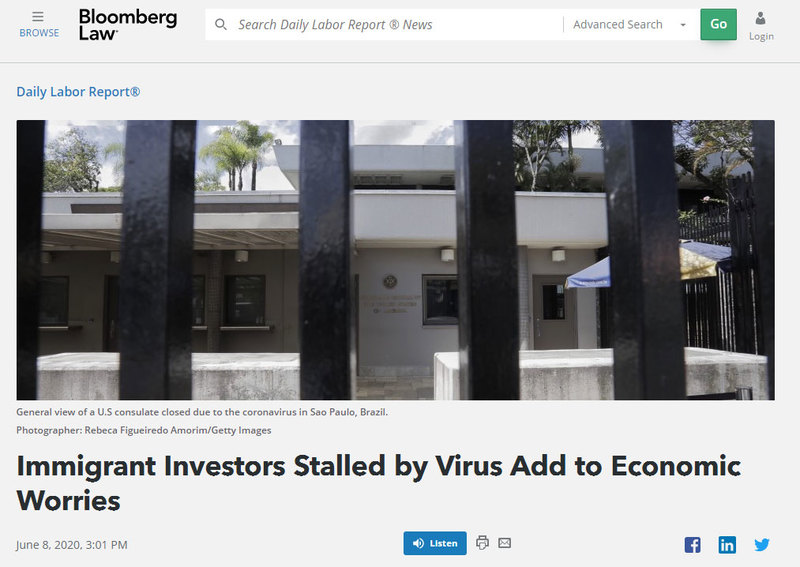 President Donald Trump exempted the EB-5 program in his April proclamation suspending green card applications from outside of the country. But consulate closures abroad and stalled U.S. business projects, such as those in the construction industry, have immigrant investors scared that their chances to become lawful permanent residents are dwindling.

The EB-5 program hit an impasse after consulates around the globe closed in March to curb the spread of the coronavirus, said Carolyn Lee, an Ithaca, N.Y.-based immigration attorney who specializes in the program, which assigns about 10,000 employment-based green cards annually.

“This year we stand to lose thousands of the precious visa numbers,” Lee said, explaining that unclaimed EB-5 visas at the end of a fiscal year are redistributed to other employment-based green card categories for the next year. “It’s really a tragedy.”

And lost visas can translate into millions of dollars in lost investments, including job creation, in the U.S. economy. “These are entrepreneurs who have been successful at home—here they’re stimulating the economy and they’re job-creating machines,” attorney Mitch Wexler of Fragomen, Del Rey, Bernsen & Loewy in Irvine, Calif., said. “We should be making it easier, not harder, for these folks.”

The EB-5 program allows immigrants to qualify for a green card if they invest the required minimum amount in a U.S. commercial entity that creates at least 10 jobs for U.S. workers. A final regulation from the Department of Homeland Security went into effect in November to raise the minimum investment amounts required for a green card to $900,000 and $1.8 million, depending on the employment area, up from $500,000 and $1 million.

At its peak, the EB-5 program brought in nearly $11 billion and created more than 355,000 U.S. jobs in 2014 and 2015, according to a report based on U.S. Citizenship and Immigration Services data. The program has been particularly popular with investors from China, Vietnam, and India.

Immigrant investors have the ability to pool their money through regional centers that connect them with commercial enterprises. The centers make up about 95% of the EB-5 program. Projects often involve components for new construction and ongoing business operations, such as hotels, nursing homes, commercial real estate ventures, among others.

The program’s popularity in the last decade corresponded with the economic recovery from the Great Recession. But a growing backlog of green cards available to investors has led to waning interest in the last couple of years.

When the investment levels for the program went up last fall, the market for the program “immediately died,” Wexler, who represents EB-5 investors, said. Now, however, the coronavirus might be sparking interest in the program for individuals who fear impending immigration restrictions from the White House on temporary visa programs.

Opponents of the program don’t see EB-5 playing a similar role in the wake of the latest economic downturn.

“As the Covid-19 pandemic has shown, the United States should not be dependent upon foreign countries—especially hostile ones like China—for either investment capital or business growth,” said Matt O’Brien, research director at the Federation for American Immigration Reform, which supports lower immigration levels.

“We are better off encouraging American entrepreneurs and businesses to invest profits here, rather than offshore,” O’Brien said in an email. “While an infusion of foreign capital from foreigners who want U.S. residency might appear to be a good idea, experience demonstrates that the bulk of profits generated through foreign capital investment tends to be rapidly expatriated, either in the form of remittances or offshore re-investment, rather than being re-invested in the United States.”

For some program participants, concerns remain over how USCIS, the agency responsible for adjudicating visas and immigration benefits, will handle investment project disruptions.

Although construction is classified as essential business, Covid-19 has, at times, resulted in work stoppages. The pandemic has also led to significant dips in operational revenue for the businesses created, Lee said.

“If an EB-5 project’s business plan required ongoing construction and resulting job creation within a certain time frame, which can’t now be done, it’s worrying,” she added. Those delays could qualify as a “material change” to the business plan, and USCIS deems material changes as a reason to revoke EB-5 petitions.

But that may not deter future interest. In January, USCIS announced that starting March 31, applications for the EB-5 program would be processed according to existing visa availability instead of on the “first-in, first-out” basis officers were following. This means the agency now gives priority to petitions where visas are immediately available or soon will be available.

“Applicants are realizing it’s probably in their best interest, if they want a life in America, it’s best to get a green card as quickly as possible,” Wexler said. And for many immigrants, especially those already in the U.S., the EB-5 program is the fastest way to do that, he said.