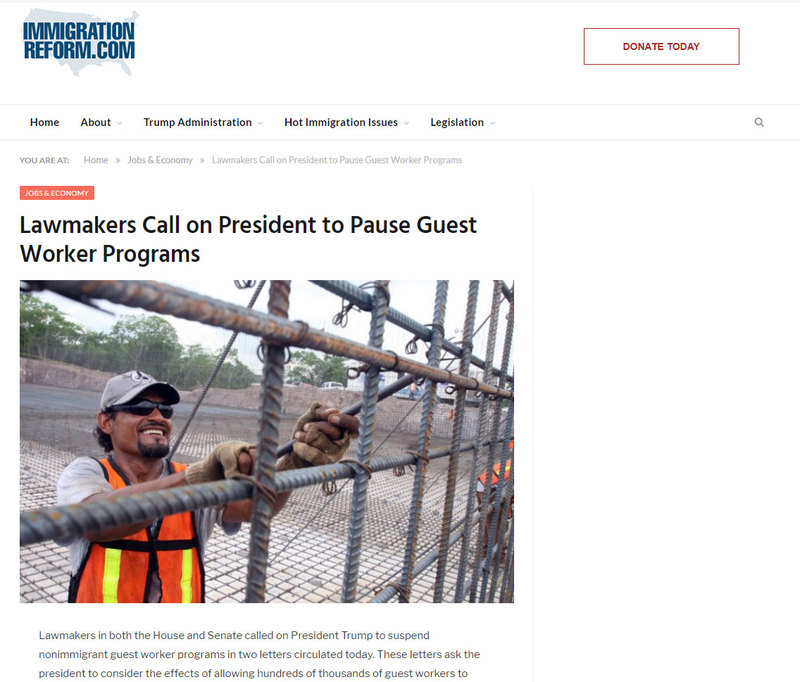 Lawmakers in both the House and Senate called on President Trump to suspend nonimmigrant guest worker programs in two letters circulated today. These letters ask the president to consider the effects of allowing hundreds of thousands of guest workers to continue working in the United States, while 33 million Americans have been added to unemployment as a result of the response to the coronavirus pandemic.

Senators Tom Cotton (R-Ark.), Ted Cruz (R-Texas), Chuck Grassley (R-Iowa), and Josh Hawley (R-Mo.) called on President Trump to “keep the American worker in mind and limit the importation of unnecessary guest workers while American families and businesses get back on their feet.”

Their letter notes that the president’s April 22, 2020 proclamation suspending some forms of immigration did not go far enough in accomplishing its purported goal of lessening the economic effects of immigration. They charge that suspending guest worker programs – particularly H-2B, H-1B, and Optional Practical Training (OPT) – would protect American workers far better than the April 22 proclamation.

The senators also took aim at the controversial EB-5 investor visa program. FAIR opposes the existence of this program and has done so for years. They correctly describe EB-5 as a program “long plagued by scandal and fraud, and has been effectively functioning as a pay-for-citizenship scheme in many cases.” President Trump’s earlier proclamation suspending some immigration curiously exempted EB-5 applicants.

In the House, Reps. Lance Gooden (R-Texas), Paul Gosar (R-Ariz.), Louie Gohmert (R-Texas), Matt Gaetz (R-Fla.), Michael Burgess (R-Texas), Mo Brooks (R-Ala.), Brian Babin (R-Texas), and Steve King (R-Iowa) released a similar letter, urging the President to suspend these guest worker programs until the crisis subsides and unemployment returns to normal, pre-coronavirus levels. The representatives wrote that “Americans are looking to the Federal Government for leadership. The coronavirus pandemic continues to wreak havoc to our health, economy, and society. You have cited the effect these programs have on our labor force and taken the initial steps to mitigate those negative impacts. We urge you to further use your legal authority and suspend substantially all temporary guest worker programs.”

The representatives similarly argued for the suspension of the EB-5 program, saying that “This program concentrates vast financial resources into already wealthy parts of the country, which is completely contradictory to the stated justification for the program. It does nothing to elevate struggling parts of our country, much less hire Americans looking for work.”

FAIR applauds the efforts of these lawmakers to bring this important issue to the attention of President Trump. On April 23, FAIR sent a letter to the president urging him to issue a second proclamation banning the entry of guest workers and suspending the programs. FAIR’s president Dan Stein wrote that “in the next 30 days, a new Executive Order must be issued to include all forms of immigration, including guest worker programs, which would allow hundreds of thousands of Americans out of the labor force to come back in, both now and when the economy finally starts to recover.”

FAIR’s letter also calls on the president to direct the Secretaries of Labor and Homeland Security to “review the labor certifications of thousands of pending employment-based immigrant and nonimmigrant visas to ensure that the employer requests are still justifiable, that the businesses are still viable, and that the foreign workers are still needed at this time.” This is just one additional step that the president could take that could save thousands of jobs for Americans.

The ball is now in the president’s court. Polling shows that over 65 percent of Americans want the president to suspend immigration during the pandemic. Only time will tell if the president heeds this call to action from lawmakers and FAIR. One thing is clear – there is support from lawmakers to suspend these programs in order to save American jobs and protect vulnerable, out-of-work Americans from further competition due to guest workers at this unprecedented time in our history.