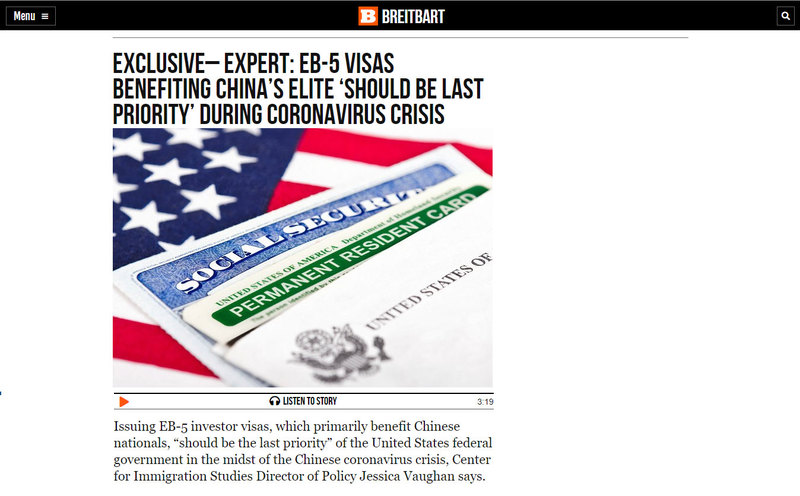 Issuing EB-5 investor visas, which primarily benefit Chinese nationals, “should be the last priority” of the United States federal government in the midst of the Chinese coronavirus crisis, Center for Immigration Studies Director of Policy Jessica Vaughan says.

Last week, President Donald Trump signed an executive order slowing green card processing for some foreign nationals trying to enter the U.S. The order authorized the continuation of the EB-5 visa program, which gives out about 10,000 green cards a year on the premise that foreign nationals invest in the U.S.

Vaughan, in an exclusive interview with SiriusXM Patriot’s Breitbart News Tonight, said the EB-5 visa program ought to be last on the administration’s priority list considering it favors China more than most other countries.

“It’s basically selling green cards to investors,” Vaughan said. “But the regulations are written in such a way that this program has become a magnet for fraud and simply a way for companies to provide capital to, often, real estate developers for projects … it’s kind of like laundering money.”

“There have been a whole host of scandals … that are security risks as well as just an affront to the integrity of our immigration system,” Vaughan continued. “This should be the last priority for people to come into the country right now, particularly when … the country where this program is most popular is China.”

As Breitbart News has chronicled, the EB-5 visa is plagued by fraud. In one of the most famous cases, New York City’s giant $25 billion Hudson Yards project on the Upper West Side was funded by EB-5 visa investments even though the program is meant to repair dilapidated and underserved areas.

The developer behind the Hudson Yards project “raked in at least $1.2 billion in EB-5 funds for this project,” according to CityLab.

“I don’t think there’s ever been a visa program that has experienced so much fraud and corruption within it because of the large sums of money that are changing hands and the value of that green card for people from China,” Vaughan said. “There have been Iranians who have been thought to be actors of the Iranian government taking advantage of this — essentially buying a green card and then U.S. citizenship.”

In the last three years, nearly 30,000 foreign nationals were able to obtain EB-5 visas. The number of EB-5 visas rewarded to Chinese nationals is, in some cases, 40 times the rate at which these green cards were once given out.