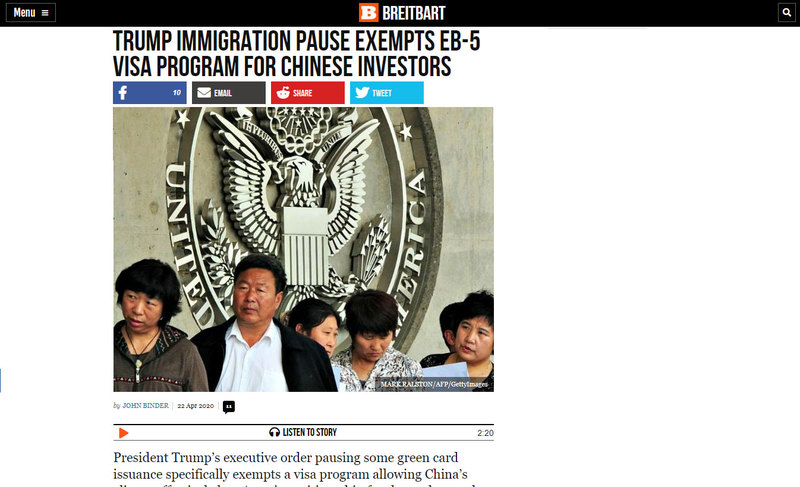 On Wednesday, Trump signed an executive order pausing visa processing for foreign nationals seeking employment-based and extended family green cards. The order comes with a series of expansive exemptions for all visa worker programs which include H-2A visas, H-2B visas, and H-1B visas.

Most significantly, the order makes a particular exemption for the EB-5 visa program that delivers green cards mostly to China’s wealthiest investors and their families.

“The suspension and limitation on entry pursuant to … this proclamation shall not apply to … any alien applying for a visa to enter the United States pursuant to the EB-5 Immigrant Investor Program,” the order states.

Under the EB-5 visa, wealthy Chinese nationals can claim to be investing $500,000 in the U.S. in order to receive green cards for themselves and their families. Within five years of residency in the U.S., these investors and their family members are able to apply for American citizenship.

Currently, 10,000 foreign nationals and their families are allowed to enter the U.S. every year through the EB-5 visa program. The overwhelming majority of EB-5 visas are rewarded to China’s elite — driving a migration of rich Chinese to cities across the country.

As Breitbart News noted, in the last three years, nearly 30,000 foreign nationals — 80 to 90 percent of which are from China — were able to obtain EB-5 visas. The number of EB-5 visas rewarded to Chinese nationals is, in some cases, 40 times the rate at which these green cards were once given out.