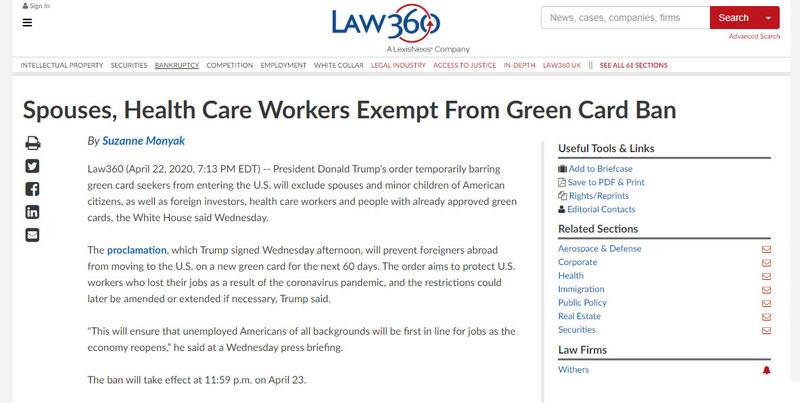 The proclamation, which Trump signed Wednesday afternoon, will prevent foreigners abroad from moving to the U.S. on a new green card for the next 60 days. The order aims to protect U.S. workers who lost their jobs as a result of the coronavirus pandemic, and the restrictions could later be amended or extended if necessary, Trump said.

“This will ensure that unemployed Americans of all backgrounds will be first in line for jobs as the economy reopens,” he said at a Wednesday press briefing.

Trump had initially announced his plans to impose the restrictions in a Monday night tweet, saying, without further details, that he planned to sign an executive order “to temporarily suspend immigration into the United States.”

The tweet set off a flurry of confusion among immigrants and employers. The next day, Trump clarified that the order is limited to those seeking permanent residency, and won’t affect individuals coming to the U.S. on temporary visas, such as the H-1B specialty occupation visa.

While individuals on temporary work visas are not currently included in the ban, the order says that administration officials will review nonimmigrant programs and recommend “other measures appropriate to stimulate the United States economy and ensure the prioritization, hiring, and employment of United States workers” within 30 days.

According to a copy of the order, issued as a presidential proclamation and published by the White House on Wednesday, the green card ban will only apply to individuals who are outside of the U.S. when the ban takes effect and who do not already have an approved immigrant visa.

Current U.S. permanent residents abroad are not subject to the ban, which also carves out exceptions for American citizens’ spouses and children younger than 21, and for members of the U.S. armed forces and their families.

However, American citizens will be unable to sponsor their adult children and parents for green cards, and U.S. permanent residents won’t be able to bring over any of their relatives on green cards. U.S. companies will also be barred from bringing on foreign workers on employment-based green cards.

The entry of these immigrants on green cards would be detrimental to the U.S. because they would compete with U.S. workers and put “strain on the finite limits of our health care system at a time when we need to prioritize Americans and the existing immigrant population,” according to the order.

Immigrants seeking green cards to work in the U.S. as health care professionals working to combat COVID-19, along with their families, are exempted from the restrictions.

Foreigners seeking to enter the U.S. through the EB-5 visa program, which gives green cards to foreign citizens who have invested in a U.S. enterprise that creates American jobs, were also excluded. To qualify for a green card under that program, investors must sink at least $900,000 into an area with a high unemployment rate, or $1.8 million elsewhere.

The order was issued under the same legal provision as the president’s so-called travel ban, which restricts visas to individuals from 13 countries. The U.S. Supreme Court upheld the president’s authority to use that provision, which allows the executive to suspend the entry of foreigners considered to be “detrimental” to the interests of the U.S., in 2018 in a case challenging Trump’s visa restrictions on individuals from a number of Muslim-majority nations.

The immediate impact of Wednesday’s order may be minimal, since the U.S. Department of State has already suspended routine visa services at consulates. However, the ban could be extended past when consulates reopen and prevent newcomers from entering the U.S. as permanent residents for longer.

Reaz Jafri, a partner at international law firm Withers LLP who focuses on business immigration, told Law360 on Wednesday that the ban is “nonsensical,” as most green cards granted abroad are family-based, whereas many foreigners who become U.S. permanent residents through their jobs first worked on temporary work visas and adjust from within the U.S.

In 2017, more than a quarter million green cards issued abroad went to immediate relatives of U.S. citizens, while fewer than 25,000 were employment-based green cards, according to U.S. Department of Homeland Security statistics.

Krish O’Mara Vignarajah, the president of the nonprofit Lutheran Immigration and Refugee Service, slammed the order in a statement Wednesday evening for keeping families separated.

“Denying children the opportunity to live here with their parents does absolutely nothing to protect American jobs,” Vignarajah said. “Families belong together — there is simply no economic or moral justification for their prolonged separation.”