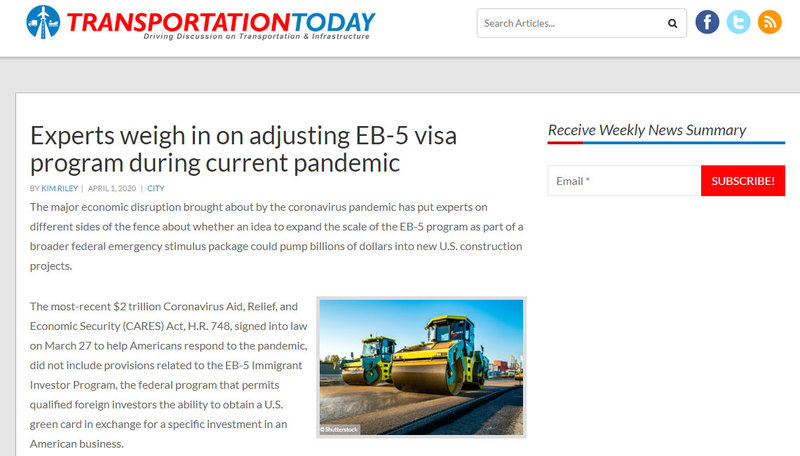 The major economic disruption brought about by the coronavirus pandemic has put experts on different sides of the fence about whether an idea to expand the scale of the EB-5 program as part of a broader federal emergency stimulus package could pump billions of dollars into new U.S. construction projects.

The most-recent $2 trillion Coronavirus Aid, Relief, and Economic Security (CARES) Act, H.R. 748, signed into law on March 27 to help Americans respond to the pandemic, did not include provisions related to the EB-5 Immigrant Investor Program, the federal program that permits qualified foreign investors the ability to obtain a U.S. green card in exchange for a specific investment in an American business.

Transportation Today asked several experts what the benefit or disadvantage would be to the nation’s economy if a proposal to increase both the EB-5 program investment threshold and number of available visas were to be included in another federal emergency relief package.

David North, a fellow at the Center for Immigration Studies (CIS) and an internationally recognized authority on immigration policy, said, “There are many faster ways to stimulate the economy than the expansion of the EB-5 program, which is slow in and of itself, and it feeds into big city construction projects which are slow to start.”

And in comparison, North said that while the forthcoming $1,200 checks authorized for Americans under the CARES Act will help a huge swathe of people, any potential expansion of EB-5 “would aid only the big city developers and a handful of construction workers,” North wrote in an email.

Foy said the EB-5 regulations that were released in a July 2019 final rule issued by U.S. Citizenship and Immigration Services (USCIS), which is overseen by the U.S. Department of Homeland Security, were an important first step to modernizing the program and restoring to it some level of integrity.

“However, combating the well-documented fraud and national security vulnerabilities within the program still requires major legislative action and reform,” said Foy. “Using a national emergency in order to expand the EB-5 program without significant reforms or to roll back the existing regulations would only exacerbate those problems. That is not something Chairman Grassley would support.”

Sen. Grassley, a staunch advocate for years to reform the EB-5 program, in September 2019 teamed up with U.S. Sen. Patrick Leahy (D-VT) to introduce the bipartisan EB-5 Reform and Integrity Act of 2019, S. 2540, which would reauthorize the EB–5 Regional Center Program to prevent fraud, while also promoting and reforming foreign capital investment and job creation in American communities.

Sen. Grassley told Transportation Today previously that both the regulations and his legislation are needed to fix the flaws in EB-5 and ensure that it works as Congress intended when it created the program in the 1990s. Sen. Grassley’s bill remains under consideration in the Senate Judiciary Committee.

“The EB-5 program attracts scoundrels like bees to honey and it sorely needs every one of these things” proposed in S. 2540, said North.

Additionally, North noted that changing the EB-5 rules again in another future coronavirus federal relief package following the November 2019 updates for EB-5 reform “would be a small, added complication.”

Aaron Grau, executive director of the Washington, D.C.-based Invest in the USA (IIUSA), the national membership-based, not-for-profit industry trade association for the EB-5 Regional Center Program, said that, “Ultimately the best thing for the program is a long-term reauthorization and reform package. That sort of definitive change would provide stability for investors and the industry; an understanding of how to plan.”

But Grau added that “An increase in the number of visas at any time would greatly benefit the national economy. To do so now would be even more impactful.”