Why Reward China With Investor-Visa Expansion? 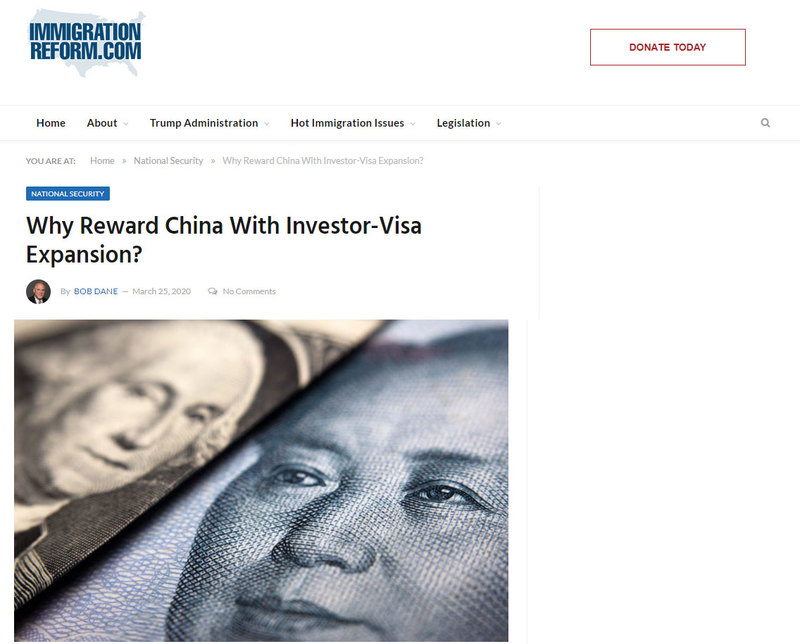 A controversial immigration program that awards U.S. visas to wealthy investors, mostly Chinese, could be expanding.

The White House is reported to be considering a proposal to increase the number of EB-5 green cards from 10,000 to 75,000 annually and slashing required investments from $900,000 to $450,000. This comes just months after the administration tightened some of the program requirements.

Half of the EB-5 recipients come from China, and the expansion proposal has encountered pushback amid heightened concerns over the coronavirus pandemic that began in that country.

Sen. Lindsey Graham, R-S.C., a longtime EB-5 supporter, vehemently denied reports he tried to include expansion language in the Senate’s coronavirus relief package. But that doesn’t mean such legislation won’t be forthcoming. Moreover, anything can happen in conference committees where conflicting House and Senate measures are reconciled.

“EB-5 really gained popularity in the last recession due to a lack of financing options. So I think the prediction is that EB-5 could help boost the real estate industry. But we are probably four to six months away from these types of non-coronavirus related economic stimulus deals,” said Shae Armstrong, a legal expert in EB-5 programs.

With Trump scrambling to bolster the staggering U.S. economy — and son-in-law Jared Kushner being both a prominent influencer of White House immigration policy and a developer who raised money via the visa-investor program – the stars may be aligning for EB-5.

For years, Sen. Charles Grassley, R-Iowa, has assailed EB-5 as a fraud-ridden and scandal-plagued visa giveaway. Lawmakers on both sides of the aisle have criticized what they call a cash-for-green cards scheme that allows foreign nationals to buy their way into this country while failing to deliver promised economic stimulus to America’s poorest communities (Targeted Employment Areas). The expansion proposal floating around Capitol Hill exacerbates EB-5’s shortcomings by radically discounting the price of admission.

Instead of doubling down on a problematic program, Congress ought to give first priority to Grassley’s bipartisan EB-5 Reform and Integrity Act. Co-sponsored by Sen. Patrick Leahy, D-Vt., S. 2540 focuses on preventing fraud and increasing oversight. Crucially, the bill provides accountability measures to ensure that American jobs are, in fact, created by EB-5 investments.

Ramming through an EB-5 expansion without those much-needed guardrails would be a classic case of haste making waste.