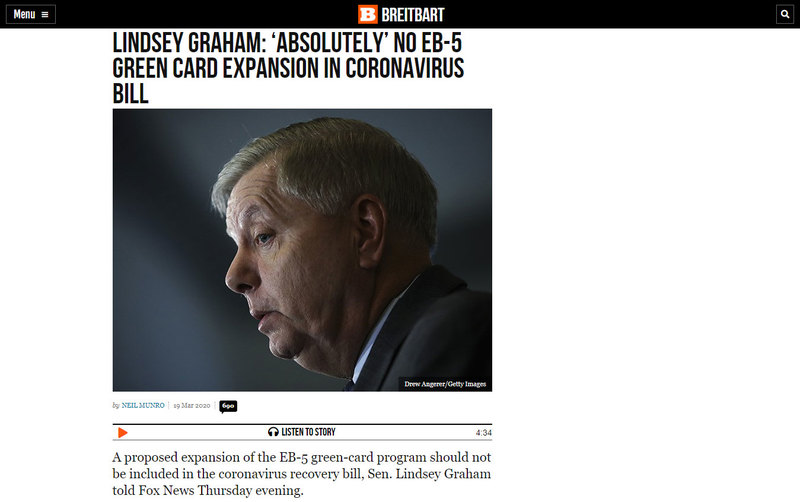 A proposed expansion of the EB-5 green-card program should not be included in the coronavirus recovery bill, Sen. Lindsey Graham told Fox News Thursday evening.

“Absolutely not,” said Graham (R-S.C), after multiple reports said he was trying to insert a huge EB-5 expansion in the pending legislation. He continued:

I haven’t talked to anybody on the planet, much less the Trump administration, about putting EB-5  on the coronavirus bill … That is not the time or the place. The President supports the [EB-5] program. I do too. We’re not going put a damn thing on this [coronavirus] bill that doesn’t protect you and your family from the virus and doesn’t give you money.

In a morning appearance on Fox News, Graham said the coronavirus money should be directed at working Americans, not just companies:

We’re at war with the virus and here’s the good news, you can kill this virus if you just stay away from each other.

What do you when you’ve got constituents out of work? What do you do with people who lost their job in Myrtle Beach?  You give them a paycheck. What do you do to a small business that has no customers? You give them a loan so they can get through this, and you can forgive the loan later. All of us should be about income stability. [If] you just lost your job — I’m gonna do everything I can to make sure in the next 48 hours, or 72, hours, we find a way to replace your income.

Graham is up for reelection in November.

The EB-5 program awards green cards and the promise of citizenship to foreign investors who lend money to private U.S. companies. The program is widely used in the real estate sector by investors to raise construction funds.

The program is often described as a citizenship-for-loans scheme, in which American citizens are forced to share their citizenship with the wealthy foreign families who lend their money to wealthy American investors.

The EB-5 program has been a boon to the real estate investors who use it to raise funds for new construction in prosperous coastal cities from wealthy Chinese and Indians who want green cards.

But the program is so scandal-prone that President Donald Trump’s Department of Homeland Security imposed a major rewrite in 2019. The rewrite forces lenders to lend twice as much money and pressures them to lend their money to poorer communities outside the major coastal centers.

Sen. Lindsey Graham would reward more of China's elite to essentially buy American citizenship with the promise of investing in U.S. cities.

In his show Thursday evening, Hannity defended the EB-5 program and suggested that Politico produced a false EB-5 report, saying, “So Politico magazine’s report is an outright falsehood?”

Graham initially defended Politico and suggested the problem was caused by another media outlet, but he reversed himself and tagged Politico:

I haven’t talked to anybody. I would object to putting anything on these bills that is not related to solving the problem. What’s the problem? People have lost their jobs … and we’re also speeding up bombing, starving, and killing the virus.

The Trump administration is considering a controversial proposal to boost the number of visas offered to wealthy immigrants who invest money in the United States as it tries to boost a faltering economy amid the escalating coronavirus outbreak, according to four people familiar with the situation.

The expansion is being pushed by Sen. Lindsey Graham (R-S.C.), chairman of the Senate Judiciary Committee and a Trump ally who has supported easing restrictions in the past, according to one of the people. His office did not respond to a request for comment.

The Graham interview came after Tucker Carlson highlighted the EB-5 controversy on his Fox News show.

…would allow wealthy Chinese, if they lend money or, or purchase, or invest money in the U.S. — which by the way, that’s a common practice [in] New Zealand, Australia. It is a way of creating jobs and investment dollars in the U.S. I actually support it, except we have to be very careful with countries that are hostile, like Russia, China, Iran, and North Korea.

Sen. Lindsey Graham seems to be using the China epidemic to accelerate the private sale of EB-5 citizenship deals to wealthy Chinese who lend money to US biz elites.

No denial from his office.