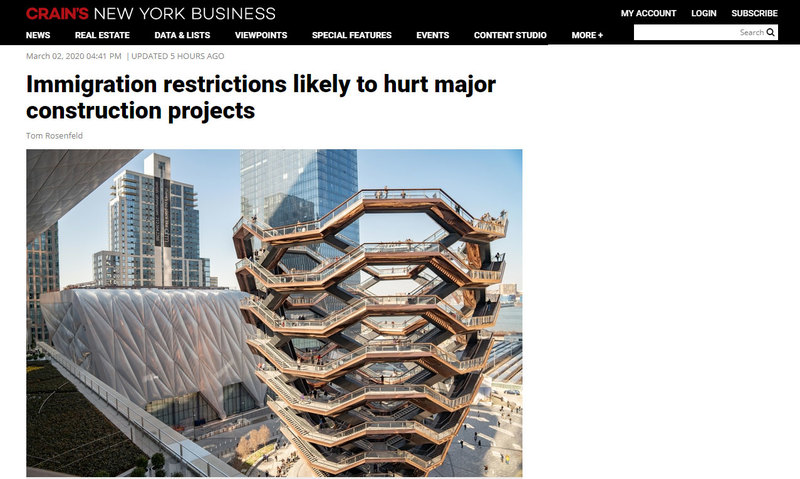 Congress established the EB-5 visa program in 1990 to attract foreign direct investments to the United States as a job-creating stimulus. In exchange for making job-creating investments, EB-5 participants would be given a chance to immigrate. Since then, it has become a compelling financing tool for New York City, including at infrastructure projects on Staten Island and at mixed-use and residential towers in Queens and Brooklyn.

Related, Tishman Speyer, Silverstein Properties and other major developers have leveraged EB-5 as an alternative financing tool for their projects, including Jaxc, Hudson Yards and the Four Seasons Hotel. The program has created tens of thousands of jobs in the city at no cost to taxpayers while contributing to tax revenues.

Yet, the EB-5 industry is at a crossroads following a year of significant regulatory changes likely to profoundly impact the city’s market, which accounted for a substantial percentage of total EB-5 investments during the past five years. Although we might see fewer stakeholders participating and though raising capital might become more challenging, I am convinced that the industry and its key stakeholders will adapt and thrive in this new environment if we unify on visa relief this year.

These regulatory changes come at a time when the industry is grappling with a significant visa backlog. We’ve collectively made the program an attractive and credible “investment for immigration” option that has created millions of U.S. jobs, but with the longest visa backlog times at 16 years, the shortage of visas is the greatest threat to EB-5’s long-term viability unless Congress takes action. Legislators have long conditioned that reforms take place before it considers increasing visas. Now that the regulations have been reformed, all EB-5 stakeholders must unify behind the demand for increased visa allocation.

There are several options to reduce the backlog: Return to the program’s original purpose of creating 100,000 jobs annually without counting qualified family members toward the visa quota. Allocate more visa numbers from other categories, such as the diversity visa. Allocate all unused EB-5 visas from previous years.

The United States is fortunate to have talented entrepreneurs from around the world who want to make meaningful contributions to our city and country. Many EB-5 investors continue their entrepreneurial efforts here, creating even more jobs unrelated to their EB-5 investments. We should support and welcome them. Right now that means giving visa relief to the EB-5 investors.