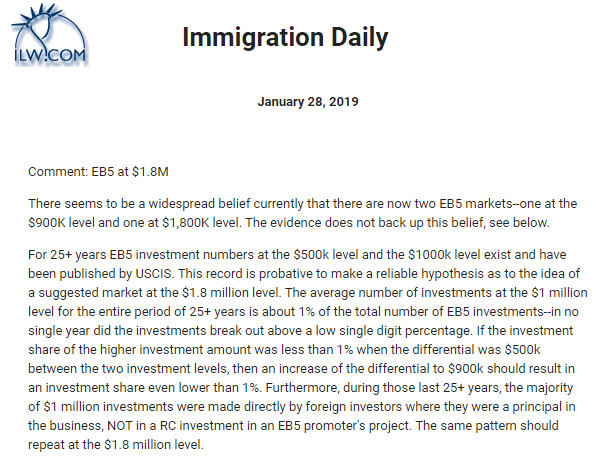 There seems to be a widespread belief currently that there are now two EB5 markets--one at the $900K level and one at $1,800K level. The evidence does not back up this belief, see below.

For 25+ years EB5 investment numbers at the $500k level and the $1000k level exist and have been published by USCIS. This record is probative to make a reliable hypothesis as to the idea of a suggested market at the $1.8 million level. The average number of investments at the $1 million level for the entire period of 25+ years is about 1% of the total number of EB5 investments--in no single year did the investments break out above a low single digit percentage. If the investment share of the higher investment amount was less than 1% when the differential was $500k between the two investment levels, then an increase of the differential to $900k should result in an investment share even lower than 1%. Furthermore, during those last 25+ years, the majority of $1 million investments were made directly by foreign investors where they were a principal in the business, NOT in a RC investment in an EB5 promoter's project. The same pattern should repeat at the $1.8 million level.

Given the above, the number of investments at $1.8 million level with a Regional Center will be less than 10 annual investments for a total investment at less than $20 million for ALL the regional centers put together at $1.8 million dollar level in any given year. We suggest this low number does not constitute a market. Based on the above, it sure seems that anyone who has any hopes of conducting a meaningful EB5 raise with multiple investors at the $1.8 million level is engaging in wishful thinking.

The EB5 industry is still trying to grasp the large structural changes in the market and is still trying to adjust to this new reality. For example, the new EB5 market is concentrated in fewer countries than the old EB5 market. If you are looking to get 10+ investors from a country and you do not already have a network in the country that has produced many investments for you in the past, then the number of countries you can go to productively has shrunk from 11 countries pre-11/21 to 5 countries post-11/21. All other countries will be good for pleasant foreign jaunts, but not for getting meaningful EB5 investment.