Between Two EB-5 Bills, Only One Offers Real Reform 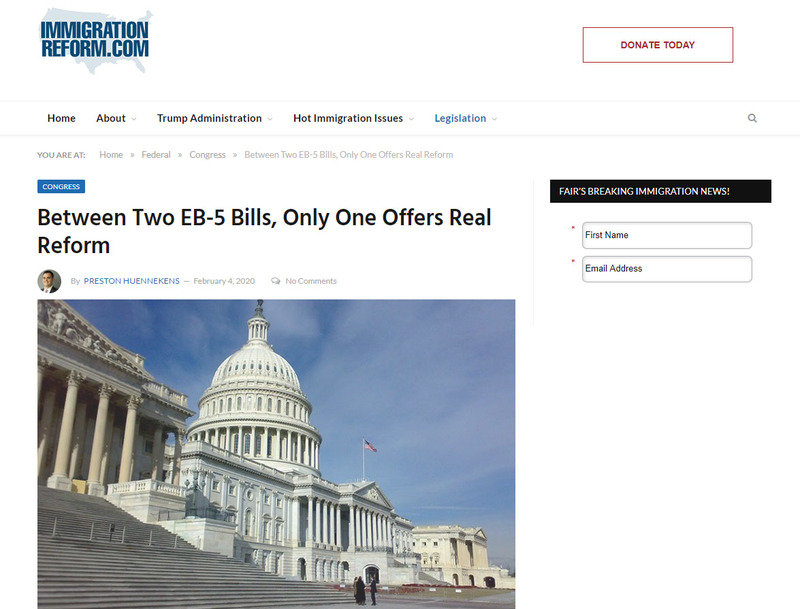 The legal industry news website Law360 released a short comparison of two bills that look to change the way the controversial EB-5 investor visa system works. Both come from the Senate, where senators may look to address the program following the conclusion of the impeachment trial.

The EB-5 program is simple on paper. Wealthy foreigners can invest in business ventures in the United States, employing American citizens and infusing capital into economically depressed areas, in exchange for immigration visas. The program attempted to spur growth in the areas by creating “targeted employment area” (TEA) designations. Investors could invest in projects in these areas for a significant discount.

But as with anything, it became complex in practice. Developers, local politicians, and wealthy foreigners exploited loopholes in the program. For example, this triad of special interests twisted and distorted the TEA designation to justify building a $25 billion EB-5 project in the financial center of New York City. No one can seriously argue that Manhattan is a struggling area in need of capital infusion. Many Americans question why the United States operates a “visas-for-sale” program at all. One normally associates “Golden visa” schemes with smaller, resource-scarce countries such as St. Kitts, Vanuatu, and Antigua and Barbuda – not the world’s premier economic superpower.

The Trump administration issued new rules for EB-5 in November 2019, raising the minimum amount for investments and reforming the definition TEAs. These rule announcements ruffled the feathers of some senators whose home states benefit from loose EB-5 rules. Shortly before the rules went into effect, Senators Mike Rounds (R-S.D.), Lindsey Graham (R-S.C.), John Cornyn (R-Texas), and Chuck Schumer (D-N.Y.) introduced S. 2778, the Immigration Investor Program Reform Act. Reporting by the news site Vox tied Senator Rounds to an EB-5 scandal in his state when he was governor. Minority leader Schumer no doubt benefits from EB-5 projects in New York City.

S. 2778 defangs the November administrative rules changes. It erases the cost difference between TEA and non-TEA projects. The administration rules raised the cost of non-TEA projects to $1.8 million, whereas TEA projects cost only $900,000. Previously, these were $1 million and $500,000, respectively. Stronger TEA designations would drive foreign investment into regions with serious need of capital, not megacities like New York and Los Angeles. S. 2778 calls for reducing the non-TEA fees to only $1.1 million – completely erasing any incentive to start a business in an economically depressed area, which is the program’s original purpose. Further, S. 2778 calls for administrative parole of the adult children of EB-5 visa holders.

Fortunately, a second EB-5 reform bill exists in the Senate that would genuinely improve upon the progress made by the November rule change. Senators Chuck Grassley (R-Iowa) and Patrick Leahy (D-Vt.) introduced S. 2540, the EB-5 Reform and Integrity Act, in September 2019. This bill focuses on preventing fraud and increasing oversight of the program. The bill establishes an “EB-5 Integrity Fund” that will give the Department of Homeland Security (DHS) the resources to properly investigate and enforce EB-5 abuse. And, importantly, the bill redefines the job creation parameters within the program, ensuring that there are in fact American jobs created by EB-5 investment.

Moving forward on EB-5 reform should be a priority for the post-impeachment Senate. S. 2540, offers real reform by beefing up DHS’s ability to monitor fraud and improving the program so that it fulfills its original purpose – infusing capital into struggling areas of the country.

For senators serious about EB-5 reform, the choice here is obvious.