EB-5 program: It helps to have friends in high places 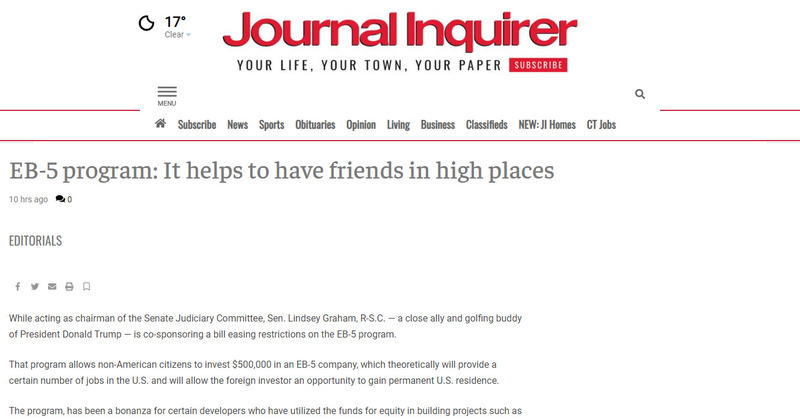 While acting as chairman of the Senate Judiciary Committee, Sen. Lindsey Graham, R-S.C. — a close ally and golfing buddy of President Donald Trump — is co-sponsoring a bill easing restrictions on the EB-5 program.

That program allows non-American citizens to invest $500,000 in an EB-5 company, which theoretically will provide a certain number of jobs in the U.S. and will allow the foreign investor an opportunity to gain permanent U.S. residency.

The program has been a bonanza for certain developers who have utilized the funds for equity in building projects such as Hudson Yards in New York.  Another major user of the program is the Kushner family. Jared Kushner’s sister, Nicole Meyer, you may remember, was boosting the program in China until she drew criticism because of her relationship with the president.

Graham’s bill, co-sponsored by Sens. John Cornyn, R-Texas, and Chuck Schumer, D-N.Y., would reduce the minimum amount required for foreigners to invest in the U.S. in order to qualify for their residency.

It would also reduce the waiting time between the date an investor commits and the date the commitment is accepted by the American parties. This has been a problem in that there have been long waiting periods for foreign investors, which has discouraged them from investing in the program.

The program has been strong in China. Many Chinese immigrants to the United States, which Trump is constantly railing about, have become residents because of the EB-5 program.

Graham’s sponsorship of a relaxation of the rules of the program to benefit investors certainly it will be welcomed by the Trump family.