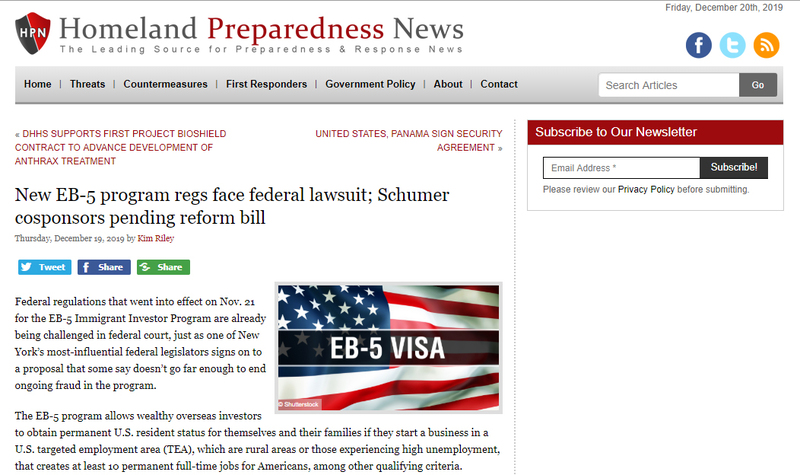 Federal regulations that went into effect on Nov. 21 for the EB-5 Immigrant Investor Program are already being challenged in federal court, just as one of New York’s most-influential federal legislator's signs on to a proposal that some say doesn’t go far enough to end ongoing fraud in the program.

The EB-5 program allows wealthy overseas investors to obtain permanent U.S. resident status for themselves and their families if they start a business in a U.S. targeted employment area (TEA), which are rural areas or those experiencing high unemployment, that creates at least 10 permanent full-time jobs for Americans, among other qualifying criteria.

Recent federal regulatory updates to the EB-5 program from the U.S. Department of Homeland Security (DHS) are designed to help the department combat the bad actors who have taken advantage of the program, which since its inception in 1990 has been fraught with fraud.

In New York, for example, federal prosecutors and regulators in May 2017 subpoenaed Kushner Companies LLC, the real-estate business owned by the family of White House senior adviser Jared Kushner, over its use of the EB-5 program.

Kushner — who is married to U.S. President Donald Trump’s daughter, Ivanka Trump, also an adviser to the president — was CEO of Kushner Companies until he stepped aside, divesting some of his investments when he joined the Trump administration.

Reportedly, the company has tried to use the EB-5 program to solicit investments in its real estate projects, like its Trump Bay Street luxury apartment complex in Jersey City, N.J, where the Kushner Companies financed a quarter of the 50-story project using $50 million in funding from EB-5 investors.

For its part, the Kushner Companies maintains that it’s cooperating with legal requests for information and says it has done nothing improper in its use of the EB-5 program.

Nevertheless, the Securities and Exchange Commission (SEC) also is investigating the privately held Kushner Companies because the agency has oversight of the EB-5 program due to the fact that related investments may be deemed securities transactions under federal laws.

And because the SEC previously has slapped enforcement actions on real estate developers it accused of raising money through the EB-5 program — and for subsequently using the proceeds for personal use rather than financing the required U.S. development projects — EB-5 experts say that’s likely the case regarding the Kushner Companies, although the SEC’s ongoing investigation has been hush-hush.

“Big city developers are pretty fond of the EB-5 program” because it also gives them better financing at lower rates, said David North, a fellow at the Center for Immigration Studies (CIS) and an internationally recognized authority on immigration policy, who said that’s been part of the program’s attractiveness for the last 25 years.

The Kushner family is deeply involved in this aspect of the EB-5 program, North said.

“What I’m describing is what the Kushner family is doing but it’s not necessarily illegal,” he told Homeland Preparedness News. “But they certainly are benefiting from the program as it is.”
But that’s changing now that the recent DHS rule went into effect on Nov. 21 eliminating a state’s ability to designate certain geographic and political subdivisions as TEAs under the program’s criteria. Instead, DHS now makes such designations to end the fraud.

“The changing of the TEA regulations means there may be fewer of these big city developments in the picture” if there isn’t associated lower EB-5 financing, said North.

Basically, developers can no longer gerrymander parts of a TEA and then add them on to a commercial project in a wealthier area to qualify for the lower investment amount.

That’s not sitting well with a Florida company, which recently filed a motion in federal court claiming that the new federal regulations violate the U.S. Constitution; weren’t properly reviewed to determine the potential negative economic impact, and could end up squashing commercial real estate development that relies on foreign investments.

Florida EB5 Investments is a regional center in central Florida. It and others around the nation serve as the middle man between EB-5 development projects and foreign investors, who under the rule’s new regulations now must contribute $900,000 to a project in a TEA, up from $500,000, or must invest in all other areas for $1.8 million, which is an increase over the previous $1 million.

Florida EB5 Investments, which is represented by Greenberg Traurig LLP, argues that these new regulations could negatively impact Miami Beach or Palm Beach, for instance, which will no longer be designated as TEAs, thereby deterring foreign investors from the EB-5 program there, according to its lawsuit.

The company also claims that the new regulations violate the Constitution by infringing on states’ rights to conduct their own government business, especially regarding economic development.

But this is exactly what the new rules should be doing, according to U.S. Sen. Chuck Grassley (R-IA), a staunch advocate for years to reform the EB-5 program.

“This rule not only brings more integrity to our immigration system, it also brings new jobs to America,” the senator said in July when DHS published the rule’s new regulations.

And Grassley’s gone even further to beef up the rule.

In September, he and U.S. Sen. Patrick Leahy (D-VT) introduced the bipartisan EB-5 Reform and Integrity Act of 2019, S. 2540, which would reauthorize the EB–5 Regional Center Program to prevent fraud, while also promoting and reforming foreign capital investment and job creation in American communities.

While the EB-5 regulations “are an important step in modernizing the program, cracking down on corruption and ensuring investments go to places that need them most,” said Sen. Grassley, “we need both the regulations and the legislation to fix the flaws in EB-5 and ensure that it works as Congress intended when it was created in the 1990s.”

“The EB-5 program attracts scoundrels like bees to honey and it sorely needs every one of these things” proposed in S. 2540, said North.

For instance, if enacted, S. 2540 would provide increased authority to DHS to deny or terminate applications where there is fraud, criminal misuse or a threat to public safety or national security, for example by terminating the designation of a regional center that fails to consent to an audit.

“This type of integrity package is something that’s been needed for a number of years and maybe it will put some backbone in the DHS to start paying attention to who’s profiting from these scandals,” North told Homeland Preparedness News.

Aaron Grau, executive director of the Washington, D.C.-based Invest in the USA (IIUSA), the national membership-based, not-for-profit industry trade association for the EB-5 Regional Center Program, pointed out that the new EB-5 regulations “do not include meaningful integrity reforms.”

“Only new legislation will accomplish that and take the necessary steps to filter out the bad actors,” Grau told Homeland Preparedness News, noting that “bad actors make it harder to get people to acknowledge and appreciate the incredible things the EB-5 program does for immigrant investors and domestic economic development.”

Grau also pointed out that “there is much, much, more good that is happening than there are bad apples” in the program and he said that because Sen. Grassley has been part of the EB-5 conversations for many years, “his opinions must be respected and his efforts to reauthorize the EB-5 program matter.”

“As the industry and Senate stakeholders in this conversation seek a meaningful, long-term reauthorization, I am sure the senator’s bill will be carefully considered,” said Grau.

On Nov. 13, U.S. Senate Minority Leader Chuck Schumer (D-NY) also signed on to S. 2778 as the sole Democratic cosponsor from New York, the state where the Kushner Companies, regional centers and others have used billions in EB-5 investments to build mega-projects in questionable TEAs, such as Hudson Yards, a massive $25 billion office-and-apartment project in New York City that raised at least $1.2 billion in financing through the EB-5 program.

Located at the source of New York’s High Line on Manhattan’s West Side, Hudson Yards is hardly in an area that should be considered rural or one with high unemployment, according to EB-5 experts.

“The Rounds’ bill is flawed,” said North, in part because it opposes TEA changes in the new EB-5 regulations that would prevent such mega-projects being funded with EB-5 program financing.

For instance, the Rounds’ bill would offer a TEA policy designed to ensure that a wide variety of urban areas remain competitive for EB-5 investments at minimum levels by counterbalancing the tightened TEA definitions with weakened incentives to invest in a TEA.

Neither the Grassley/Leahy bill nor the Rounds’ proposal have moved since their introductions and both remain under consideration in the U.S. Senate Judiciary Committee.