A federal program to boost struggling businesses is a backfiring embarrassment 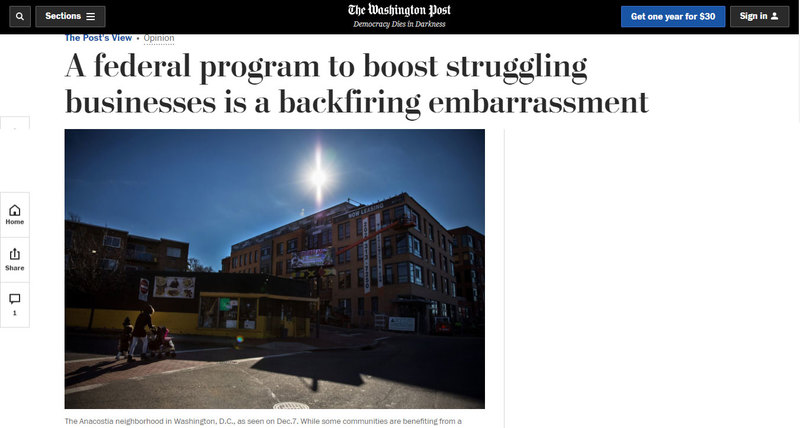 he Anacostia neighborhood in Washington, D.C., as seen on Dec.7. While some communities are benefiting from a federal contracting program that tries to level the playing field by giving under-served communities a chance to procure federal work contracts, other communities are not seeing the benefits.

THE PUBLIC has been aware for months that a federal program created to steer government business to small companies in disadvantaged areas has actually subsidized companies in the District’s most affluent areas, to the tune of $540 million. The Post’s John D. Harden laid bare this distortion of the Small Business Administration’s Historically Underutilized Business Zones (HUBZones) program in April. What had not been quite clear until now was precisely why a program meant to help otherwise-struggling businesses was instead awarding federal contracts to just 11 firms located in the hot areas of Dupont Circle, Navy Yard and downtown.

The answer, more digging by Mr. Harden has just shown, is that the government has not updated data used to define a “historically underutilized” area in almost two decades. It’s a new embarrassment for a program, created by Congress in 1997 that currently supplies $340 million of benefits to areas that qualify only because large numbers of resident college students artificially inflate their local poverty rates, according to Mr. Harden’s research.

It would appear that, rather than making the United States a more equitable country, this program is having a modest but real counterproductive impact. By no means do we mean to single out HUBZone for criticism, or to deny that it may have helped support 40,000 jobs nationwide — or that it has been modified to correct egregious abuses and errors, as its supporters say. Rather, the point here is that HUBZone typifies the pitfalls of any federal economic development approach that attempts to pinpoint “pockets of poverty” amid the vast, dynamic U.S. economy, and steer investment there. Urban areas have a way of changing and developing faster than government agencies can adapt. And interested parties have an incentive to influence the definition of what counts as a “distressed” or “underserved” area. Alleged “gerrymandering” of areas open to projects funded by wealthy foreign green card seekers has plagued another economic development program, the EB-5 visa.

Last August, the New York Times reported that yet a third targeted subsidy, the “opportunity zone” tax break in the 2017 tax-cut legislation, has helped real estate projects in gentrifying areas across the country (as well as distressed towns such as Erie, Pa.). The Times reported that superwealthy investors are using untaxed profits from their stocks and other investments to fund “high-end apartment buildings and hotels, storage facilities that employ only a handful of workers, and student housing in bustling college towns.” Several projects were already underway even before the tax law passed, thus undermining the argument that it was necessary to create jobs.

The fundamental flaw is not poor targeting; it is that, even when they operate completely according to law, these programs move investment from one place to another according to political, not market, criteria. There is undoubtedly real distress in places that have been hit by industrial decline; “creative destruction” is a necessary part of a market economy. The best way to help offset it, however, is to set broad incentives that raise the productivity and enhance investment opportunities equally across the country, not to set up nontransparent processes for insiders to game.