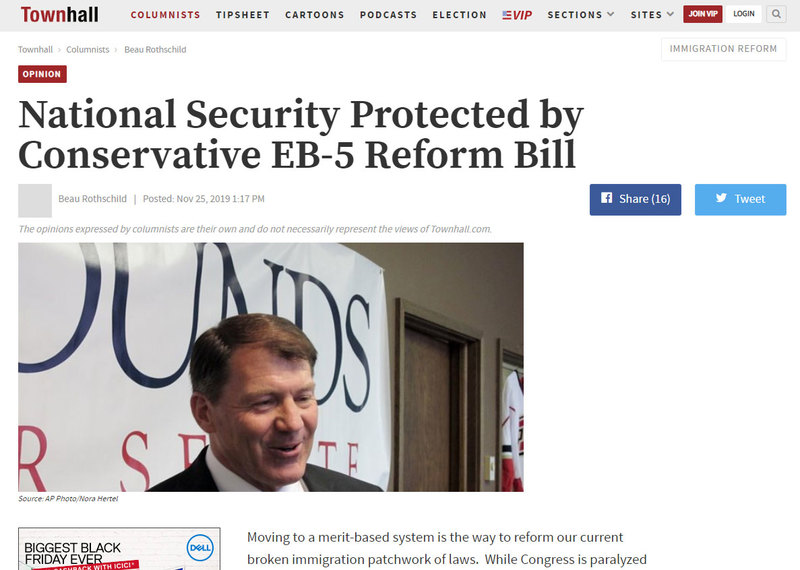 One of the biggest obstacles in reforming the system is to change law while protecting the national security of the United States. Americans want a system that provides strong national security protections to keep potential terrorists out of our country.

Merit-based immigration will increase the national security of the United States in two ways. First, it will be a system where a person who is coming to the U.S. with a skill or with resources for investment is fully screened before being allowed in. Usually, people in the business community with specialized education levels are at a lower risk, because they come here for a job or to invest in a project with the goal of making a better life.  Second, a reformed system will put in place new screening protocols that are not feasible for the Visa Lottery or other chain migration programs.

The EB-5 program in place today is ready for such reforms. The program has been a successful immigration program that allows foreign investors to come to the U.S. on a visa if they create American jobs and invest in American projects. A 2018 American Action Forum study projected at least $20 billion in new investment has been produced by the program since 2008. A 2019 study from the Economic & Policy Resources projected $11 billion in investment over a two year period ending in 2015 with big gains in the hotel industry (estimated $1 billion), healthcare (estimated $350 million) and real estate ($500 million). These numbers do not include another billion gained over the two-year period for architecture and wholesale trade. The program has also created more than 100,000 jobs over the history of the program.  In short, this program promotes billions in investment and the creation of hundreds of thousands of jobs, unless it is not supported by Congress and the Trump administration.

This month, Senator Mike Rounds (R-SD) introduced the Immigrant Investor Reform Act, S.2778 with Senators Lindsey Graham (R-SC) and John Cornyn (R-TX) to reform the program in a way that strengthens protections for national security. The legislation will provide the Department of Homeland Security (DHS) the authority to conduct criminal background checks and collect biometric information for applicants in the regional center program. If regional centers administering the program do not comply with the law, they will be terminated, and DHS will be further empowered to revoke an immigrant investor petition for fraud, misrepresentation or non-compliance with the program. Most importantly, if DHS has any national security concern about an applicant, they have the power to kick them out of the program.

These reforms make sense and they are coupled with provisions that will remove the red tape of government that is slowing the approval of petitions to date. While petitions are delayed, American projects go without investment and foreign investors are choosing European destinations for billions in investment. Because of current backlogs and long waits, American jobs are not being created and billions in cash are flowing to other nations with more rational investor visa programs.

The biggest challenge today to the program is a Zombie Regulation that is still alive from the Obama administration. Somehow, the Trump administration allowed the anti-merit-based immigration Obama regulation to survive and become an active regulation this month. The Obama regulation makes changes to the program with the intent on killing it. The Obama regulation hikes investment mandates and puts in place new red tape intended on deterring foreign investment in the U.S., because they favor family based and lottery immigration. Left-wing advocates for immigration reform despise H-1B high skilled visas and EB-5 investor visa programs because they want all those slots allocated to chain migration programs.

Expanding the economy and creating American jobs is a wholly American idea and one that makes sense in the immigration reform sphere. The best way for President Trump to implement a merit-based immigration system that both protects national security and promotes a system based on merit would be to help get Senator Rounds’ bill across the finish line and to kill the Obama administration regulations that somehow survived three years of the president’s first term in office.