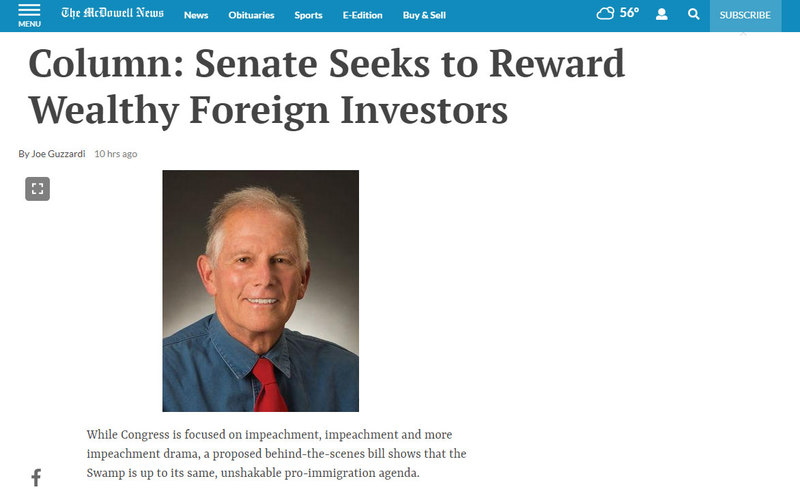 While Congress is focused on impeachment, impeachment and more impeachment drama, a proposed behind-the-scenes bill shows that the Swamp is up to its same, unshakable pro-immigration agenda.

Two things stand out about the Immigrant Investor Program Reform Act (S 2778). First, while Democrats usually take most of the heat for endorsing immigration spikes, the bill’s sponsors are Republicans. Second, the bill deals with EB-5, a fraud-ridden, aimless visa that Congress could, and should, eliminate. The sponsors are three Republican senators: Lindsey Graham of South Carolina, John Cornyn of Texas, and Mike Rounds of South Dakota. All three have long voting histories of subverting Americans in favor of foreign nationals.

Fundamentally, the EB-5 is a citizenship-for-sale visa that allows wealthy overseas investors to obtain Green Cards for themselves and their families, including minor children. To qualify, they must begin a business that creates at least ten permanent full-time jobs for Americans. The proposed legislation is a knee-jerk attempt to derail important changes that the Department of Homeland Security will put into effect this week. DHS intends to shift the EB-5 investors’ focus back to underdeveloped and rural communities that need a boost, the program’s original intention when the Immigration Act of 1990 created the visa.

Investors, however, quickly got savvy to the wealth potential in large cities like New York, Los Angeles and other major financial capitals. As far as the EB-5 crowd is concerned, the hinterlands are nowhere. For example, Senior White House advisor Jared Kushner and his real estate partners exploited an EB-5 loophole to develop what The Washington Post described as “an opulent, 50-story residential tower in this city’s booming waterfront district.”

Since dozens of investors have deceptively skirted the existing EB-5 guidelines, they oppose DHS’ tighter standards. As an added bonus, the proposed bill would fast-track 30,000 backlogged EB-5 applicants through another controversial immigration vehicle, parole, a free pass for otherwise inadmissible aliens. Since the visa holder can bring his spouse, and children who are under age 21, aggregate admissions will far exceed 30,000. A maximum 5,000 EB-5s are granted annually, but many more applications are submitted.

Fraud has consistently plagued the EB-5 program. In August, a scam surfaced when the State Department’s Diplomatic Security Service assisted in getting indictments totaling $110 million against three major players. They lured 200 unsuspecting Chinese investors hoping to get Green Cards via the San Francisco Regional Center that promised “Safe Investments to set your family on the path to American Citizenship.” And in a South Dakota case, Rounds’ home state, 16 of 17 of the jobs created were given to illegal aliens.

The federal government is also a fraud enabler. In 1995, 31 families were granted EB-5s, but could not come up with the minimum investment. Thanks to U.S. Customs and Immigration Services largesse, more than two decades later, those families remain in the country.

Calls to end EB-5 are widespread and include several big business and immigration advocates like the aforementioned Post, The New York Times and Bloomberg. From a Post editorial, EB-5 is “a corruption-prone visa program…” and “ending it should be a no-brainer.” The Times headline was “Program that Lets Foreigners Write a Check, and Get a Visa, Draws Scrutiny,” and Bloomberg wrote that the program has fallen victim to fraud and abuse.

Congress refuses to end the needless EB-5 program that helps immigration lawyers and D.C. lobbyists, but few others. Allegedly, EB-5 generates jobs for Americans. But a little basic math shows that the program’s effect is minimal as a percentage of the working American population of 157 million. Citizenship for sale is an unthinkable concept, and grossly unfair to less fortunate prospective immigrants.

On the strength of that alone, Congress should terminate EB-5.