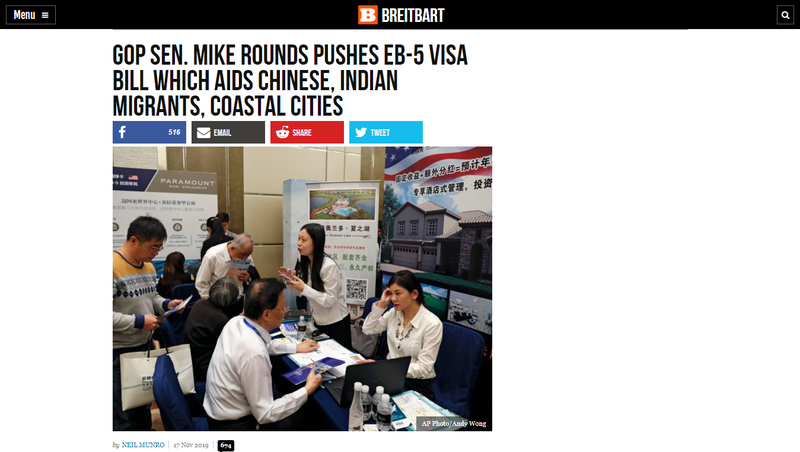 South Dakota GOP Sen. Mike Rounds has drafted a bill that would help wealthy Chinese buy citizenship — and would also help steer investment away from the heartland states towards the increasingly wealthy states on the coasts.

The giveaway for the wealthy Chinese lenders is buried on page 85 of Rounds’ draft bill, which offers a “parole” shortcut around the backlog of Chinese who are now waiting in line for EB-5 green cards:

The Secretary of Homeland Security, in the Secretary’s discretion, may temporarily parole into the United States, under such conditions as the Secretary may prescribe, any alien who is the beneficiary of a petition for immigrant status [once] 3 years or more have elapsed since the petition was filed.

This parole language gives a citizenship shortcut to the foreigners who lend money to the U.S. real-estate industry in exchange for green cards via the EB-5 program. The program is such a giveaway that 73,000 foreigners have joined the line for the annual distribution of 10,000 green-card tickets to citizenship.

But the EB-5 law includes individual “country caps” to help diversify the award of green cards. These country caps have some flexibility, but the rush of lenders means that Chinese who sign up in late 2019 face a 17-year wait to get their cards, while Indians must wait nine years for their cards.

The long waits make it difficult for the U.S. real-estate industry to sell more EB-5 green cards to Indians or Chinese lenders.

Rounds’ bill will fix that real-estate funding problem by allowing Chinese and Indians lenders to skip their waiting lines after just three years if they get “parole” from the secretary of the Department of Homeland Security.

The foreigners have an obvious strategy to get parole: Persuade Rounds and other legislators to pressure the DHS secretary until the secretary quietly approves the parole requests.

Congress has already used the same indirect strategy to import more  H-2B visa-workers for executives in the landscaping industry.

It is not clear if the three legislators will push the EB-5 bill up for a vote, or if they will try to attach it to a must-pass bill late in the year. The bill may only be a symbolic signal of support to interest groups, such as Cornyn’s Texas donors, during the run-up to the 2020 election year.

The bill also may have been drafted an alternative Sen. Mike Lee’s S.386 bill, which removes the “country caps” to reward the Chinese and India EB-5 lenders. But Lee’s bill is opposed by populists who say it encourages Indian graduates to take Americans’ college-jobs, and by Democrat Sen. Dick Durbin, who wants to raise immigration levels.

The new regulations were adopted because most EB-5 loans have gone to building projects in California, New Jersey, or New York.

The regulations will be issued on November 21 by the U.S. Citizenship and Immigration Services agency. The USCIS rules allow lenders to get visas for loaning just $900,000 to projects in lower-income zones, dubbed “targeted employment areas.” Outside the TEAs, lenders must lend $1.8 million to get their visas.

David North at the Center for Immigration Studies described how Rounds gets around the USCIS reforms:

Then, on p. 67, we learn that in addition to the precisely defined targeted employment areas (TEAs) of the regulations set to take effect this month — which is where the moneys are to be invested — middlemen will be allowed to place the investments in “qualified opportunity zones” created under another federal law, which are subject to easy manipulation by the middlemen and their allies in state government.

An October meeting of the EB-5 industry included a panel on the “qualified opportunity zones.”

EB-5 has been around since 1990; Opportunity Zones only since 2017. OZs are designated census tracts in which federal tax liabilities on real estate gains are deferred or eliminated under certain conditions, such as a holding period of seven to ten years … This panel will explore how the two programs can be combined to improve the viability and profitability of the underlying EB-5 development project.

Rounds’ bill also apparently reduces the incentives for investors to put their money into lower income areas. On page 87, his bill cuts the loan requirement for normal, non-poor locations to just $1.1 million, down from the $1.8 million in the USCIS regulations.  But Rounds’ bill sets the price for TEA areas at $1 million. This shift means his bill offers only a $100,000 incentive for lenders to put their money into lower-income areas.

Rounds’ staff did not respond to emails from Breitbart News.

But the EB-5 bill is just one small part of a much larger Washington policy that is widening the wealth gap between coastal and heartland states.

For roughly 30 years, immigration has supercharged the economic growth in the coastal states. The huge supply of visa workers and legal immigrants arriving at Los Angeles International airport, for example, means that California investors can ignore the pool of American labor in heartland states. The coastal investors can fund new job creation centers close to their neighborhoods, and fill those jobs with the legal immigrants who arrive daily from India, Africa, South America, and Asia.

The flow of government supplied labor denies jobs, investments, opportunities, and wealth to many Americans in slower-growing, lower-priced, interior towns. States, communities, and families expend a huge effort to birth, rear, and educate millions of young Americans — but coastal investors can simply hire the imported workers from around the world.

The shift in power from families to investors — and the resulting regional wealth gap — is spotlighted by a 2018 report from the Economic Innovation Group, “From Great Recession to Great Reshuffling”:

While the overall population in distressed zip codes declined, the number of rural Americans in that category increased by nearly 1 million between the two periods. Rural zip codes exhibited the most volatility and were by far the most likely to be downwardly mobile on the index, with 30 percent dropping into a lower quintile of prosperity—nearly twice the proportion of urban zip codes that fell into a lower quintile.

The same geographic skew is visible in investment deals tracked by the PricewaterhouseCoopers firm, according to a report at SSTI.org:

The inflow of immigrants matches the wealth shift from the heartland and to coasts, according to data in a 2018 report by the Center for Immigration Studies:

Pete Buttigieg wants to stop the loss of people from small-town American by importing more immigrants. But the 'cure' is the problem: Immigration is helping to drain the heartland of people by subsidizing the creation of jobs & wealth in coastal cities.

Rounds has a long history of supporting the migration policies that widen the population-wealth gap between the heartland and the coasts.

In February 2018, for example, Rounds worked with Maine GOP Sen. Susan Collins to pass a “prioritization amnesty” for more than 11 million illegals living in the United States. The hidden amnesty was attached to the tail end of his 64-page “Immigration Security and Opportunity Act,” which offered an amnesty to roughly 3 million younger illegals. The double amnesty bill was released to the public the same day that Rounds, Collins, and their six GOP allies tried to rush it through the Senate.

Rounds’ DACA and prioritization double amnesty won 54 votes, putting it just shy of the 60-vote threshold because nearly all Democrats voted for the amnesty. The bill might have passed the Senate but for strong opposition from President Donald Trump and the officials at the Department of Homeland Security. Their criticism reportedly deterred several additional business first Republicans from pushing the bill up above the threshold of 60 votes. “The administration made it difficult for some [Republicans] to try to publicly support anything,” one Republican senator told Politico.

Rounds is touting his bill despite his prior entanglement in an EB-5 scandal. The Rapid City Journal reported November 8:

After Rounds was term-limited as governor in 2010, revelations poured forth about the state-run EB-5 regional center that his administration oversaw (most other EB-5 regional centers are privately run). One former state official who was connected with the center committed suicide in 2013 while he was under investigation for grand theft, and another pleaded guilty to a felony in 2017 for illegally using funds associated with the program.

The U.S. Citizenship and Immigration Services subsequently terminated South Dakota’s EB-5 regional center, but the state appealed and the USCIS Administrative Appeals Office withdrew the termination and remanded it for further review in 2017. That review remains pending, a USCIS spokesman said Friday.

Fallout from the EB-5 scandal dogged Rounds throughout his 2014 Senate campaign. His support dipped as low as 39 percent in one poll before he ultimately won with 50 percent of the vote in a three-way race. Although he has not officially announced that he will seek re-election next year, his campaign committee has been raising money.

The pending farmworker amnesty bill should be revised to further cut farmworkers' wages, says the United States Chamber of Commerce.