OPPORTUNITY: Foreign investment program could be a good fit for Valley 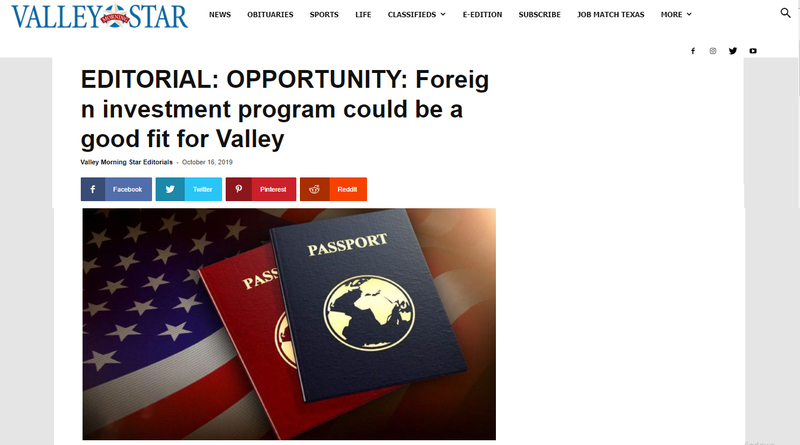 The city of McAllen recently announced a deal with Houston-based investors to help fund construction of the Cambria Hotel, next to the McAllen Convention Center. Some of the investors are foreign-born, and the deal utilizes a federal visa program that Rio Grande Valley officials could use to attract new business.

Under the program, foreign entrepreneurs who invest in this country can get an EB-5 visa that enables them to stay here to conduct their business. The visa also puts the investors on a fast track toward receiving “green card” permanent residency visas for themselves and their families.

The EB-5 visa was created in 1990 to stimulate our economy through foreign investment, and McAllen and other cities have utilized it for years. Its success should inspire expanded, and even more aggressive, promotion of the program and its opportunities.

Business owners in other countries have been looking to the United States in recent years as options for either escaping problems in their home countries or pursuing new opportunities in the United States’ more affluent and more stable economy. Several businesses in northern Mexico already have moved or expanded into the Valley, some of them seeking to escape the risks of facing drug cartel-related violence and extortion.

Valley officials could promote the EB-5 program, and especially the greater promise of attaining U.S. residency permits for their families, to help entice even more successful business owners to bring their resources, including their experience and knowledge, to help expand our local economy.

The program currently requires foreign entrepreneurs to invest at least $1 million in the United States — $500,000 in designated high-unemployment areas such as the Valley, officially called targeted employment areas — in a U.S. commercial enterprise. Their investment must create at least 10 permanent, full-time jobs for qualified U.S. workers.

On Nov. 21, the investment minimums will increase to $1.8 million total and $900,000 in the TEAs, to account for inflation since the program started.

While Mexico is our closest neighbor and perhaps the most logical source of potential new investors, our promotion of the EB-5 program shouldn’t be limited. Over the years, local economic development officials have received many entrepreneurs from Asia, Europe and other countries looking for places to invest. If that investment includes possible residency in this country, the program could be another incentive.

While McAllen has benefited from the EB-5 visa for several years, we would advise other cities to exercise caution before using their city commissions as the EB-5 board, as McAllen does. We don’t know of any problems in the past, but we see a risk that the program could entice investors — or candidates — to see an opportunity for patronage. Moreover, given the volatile nature of our current immigration debate, acceptance or rejection of investors from certain countries could be influenced by an official’s perceptions on how it might affect one’s electability.

Otherwise, other Valley officials should consider the EB-5 program as a promotional tool that could bring new investment to our shores.