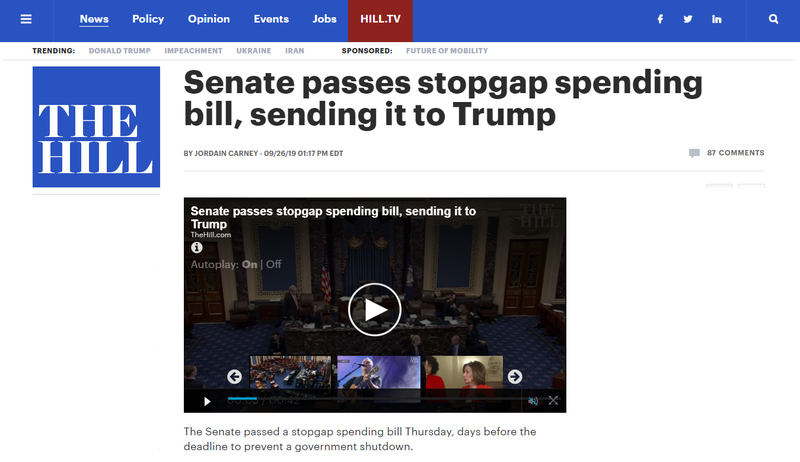 The Senate passed a stopgap spending bill Thursday, days before the deadline to prevent a government shutdown.

Senators originally voted 82-15 on the continuing resolution (CR), which will fund the government through Nov. 21, but Sen. Mike Braun (R-Ind.) changed his vote after the tally was closed, making it 81-16.

Lawmakers had until Monday night to prevent the second funding lapse of the year. The measure, which passed the House last week, now heads to President Trump’s desk, where White House officials have said they expect him to sign it.

The short-term funding bill includes a provision requiring the Department of Agriculture to provide state-by-state data on the effects of President Trump’s trade war, extends funding for a slew of health programs and the National Flood Insurance Program and reauthorizes the Export-Import Bank.

Senators rejected an amendment from Sen. Rand Paul (R-Ky.) that would have cut spending to help pay for the stopgap bill.

The spending bill also left out many of the list of “anomalies” requested by the White House, including a request that Congress lift a restriction on where the administration can build southern border barriers.

But Eric Ueland, the White House’s director of legislative affairs, told reporters this week that he believed Trump would sign the bill despite the restriction.

“We believe the CR is an appropriate construct between both parties, both chambers, and both ends of Pennsylvania Avenue. I expect that … the president will be able to sign it,” Ueland said.

The decision to kick the funding fight toward the end of the year comes as lawmakers have struggled to get fiscal 2020 spending bills off the ground.

House Democrats have passed 10 of the 12 fiscal 2020 appropriations bills, but many of them are loaded up with Democratic priorities viewed as non-starters in the GOP-controlled Senate. Senators, meanwhile, have passed none of the fiscal 2020 spending bills.

Senate appropriators are on track to pass 10 out of the 12 bills out of the committee by the end of Thursday, but several of the most controversial bills, including funding for the Departments of Defense and Homeland Security, aren’t able to get 60 votes on the Senate floor.

Appropriations Committee Chairman Richard Shelby (R-Ala.) warned on Thursday that lawmakers “still have a long way to go” to prevent a shutdown at the end of November.

“It’s no secret that we’ve shared mixed success in getting bills through the committee,” Shelby said.

He is expected to go to the White House on Thursday to talk with Trump about how to find a potential path to breaking the impasse.

Similar to the dynamic that led to the 35-day partial shutdown that started in December, the biggest hurdle for funding the government is Trump’s border wall.

Senate Democrats are fuming after Republicans forced through top-line spending numbers, known as 302(b)s, on a party-line vote in the Appropriations Committee.

The Senate voted on Wednesday to end Trump’s emergency declaration. If that measure passes the House, it would set up a veto showdown with the White House. Trump vetoed a similar resolution earlier this year, and a veto override failed in the House.

“I think it’s bad for our country and a waste of taxpayer dollars, and it’s to fulfill half a campaign promise to build a wall and hope the taxpayers ignore … that the president gave his word that Mexico would pay for the wall and that’s not going to happen,” Leahy said.