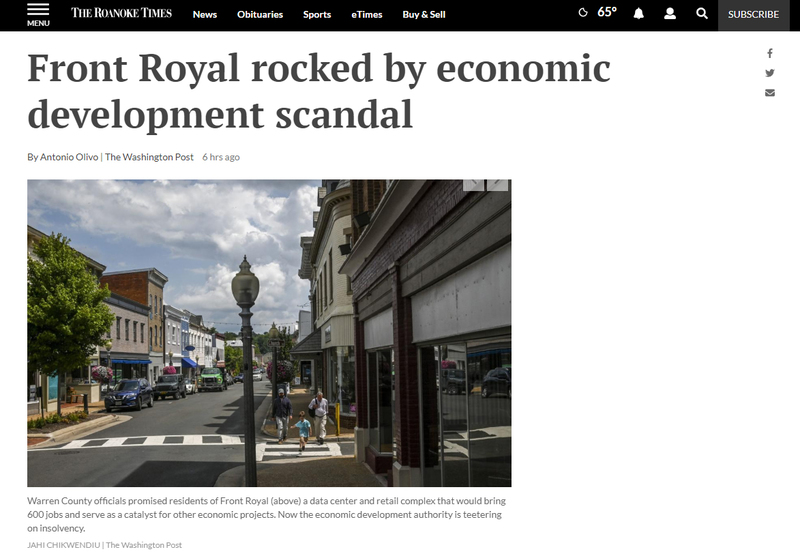 Before the $21 million allegedly went missing, before the sheriff killed himself, before Tuesday’s announcement that the entire top tier of the Warren County government had been indicted, there was the dream.

It was a dream of renewal for this northern Shenandoah Valley town, which fell on hard times after a rayon manufacturing plant closed in 1989, leaving 1,300 people jobless and 440 acres full of toxic waste.

Twenty five years later, with the land cleaned up and Front Royal increasingly attractive to tourists and former city dwellers, officials announced plans for a data center and retail complex that would bring 600 jobs and act as a catalyst for other projects.

The deal was brokered by Jennifer McDonald, a longtime Front Royal resident who directed the Warren County economic development authority. Washington-area developer Truc “Curt” Tran pledged to finance it with $40 million from wealthy immigrant investors and a $140 million federal contract his technology company had secured. As an added bonus, Tran would fund a police training academy overseen by longtime Sheriff Daniel McEathron.

But those were lies, documents in Warren County Circuit Court allege.

Tran never had the money to build the data center project on the 30 acres his company bought from McDonald’s agency for $1, a civil lawsuit alleges. And the training academy was one of several hoaxes that, prosecutors and civil lawsuits claim, allowed Tran, McDonald, McEathron and others to siphon away millions in public funds, which they allegedly used to buy properties, pay bills and gambling debts, and enrich relatives and friends.

Now McEathron is dead, Tran is being sued by the economic development authority and there are state and federal investigations underway. McDonald faces 28 state counts of embezzlement, money laundering and obtaining money through false pretenses. She has denied the allegations and did not return interview requests, while Tran declined to comment through his attorney.

The claims against them, industry groups say, reflect the perils of weak oversight in economic development agencies — quasi-public entities that oversee large, complicated transactions, and whose boards often lack the financial savvy and investor scrutiny that protect their corporate counterparts.

On Tuesday, the Virginia State Police announced that 14 current and former local officials — including all five county supervisors — were charged with misdemeanor misfeasance and nonfeasance “based on the individuals’ knowledge of and inaction [regarding] the EDA’s mismanagement of funds.”

The economic development authority is teetering on insolvency. And neighborly Front Royal once again feels toxic, as residents wonder where else the corruption may have taken root.

“The story is just getting more complicated,” said longtime resident Melanie Salins, who co-founded a community group that has tracked a growing web of suspicious land and business deals. “For them to be able to steal from us and look us in the face like everything’s fine, it’s offensive.”

McDonald started as a property manager for the authority in 1999 after graduating from High Point University in North Carolina with a political science degree. She became director in 2008, eventually earning $115,000 a year.

As director, she helped lure Walmart, Target and a Lowe’s home improvement store to Front Royal, as well as a $100 million hospital that is under construction, a former board member said. In 2014, she met Tran, who had sought help with the data center idea from the office of then-Rep. Bob Goodlatte, R-Roanoke County, according to Pete Larkin, who was Goodlatte’s chief of staff.

A soft-spoken resident of upscale Great Falls, whose website boasts of contracts with the U.S. Office of Management and Budget, Tran wanted to turn part of the former Avtex Fibers manufacturing campus into a hub for cloud computing, with a three-building, $40 million complex .

McDonald’s board approved a $10 million, 90-day loan. Tran promised funding from 80 foreign investors enrolled in the federal EB-5 visa program, which offers applicants and their families a path to citizenship in exchange for the jobs their money helps create. Officials and residents gushed over the plan.

The regional Criminal Justice Training Academy was announced the following year. McDonald said an anonymous donor would provide $8 million, and told her board the donor was Tran, the civil lawsuit says. McEathron, a fellow Rotarian, would be in charge.

The broad-shouldered sheriff was a morning fixture at a vinyl booth diner on Main Street. He had launched a summer camp . The training academy further raised his profile.

It all seemed incredibly fortunate — until late 2016, when some town officials and residents looked up Tran’s company online.

They found it hadn’t yet been allowed to solicit investments under the EB-5 program. The $140 million federal contract appeared to be a mirage, with Tran receiving no payments from it. Skeptics asked increasingly pointed questions at public meetings, sparking warnings from town council members that the naysayers would blow Front Royal’s big chance.

“They chewed me up and down,” said Bébhinn Egger, a former council member who was among the first to raise alarms. “It only took me about 15 minutes of research to see that there was something fishy going on.”

In an email to McDonald in early 2017, Tran said the questions meant “our ability to raise capital within the EB-5 investor community is now in jeopardy,” court records filed as part of the civil lawsuit show. His company was eventually approved for the program, then later disqualified, a decision Tran is appealing, according to U.S. Citizen and Immigration Services, which administers the EB-5 program.

The town council authorized $1.7 million of infrastructure improvements for the Avtex site, and according to the lawsuit, McDonald allegedly paid Tran at least $1.5 million for construction costs without informing her board.

In 2018, Front Royal’s finance director discovered a bigger red flag: The authority had overbilled Front Royal nearly $300,000 for its portion of debt service related to the Avtex site and a road improvement project. At a meeting , McDonald said she had mistakenly falsified some invoices, town attorney Doug Napier recalled.

The revelation prompted a call to state police and an independent review of the authority’s books that uncovered a dizzying array of phony invoices, phantom projects, secret land deals and bank wire transfers to entities controlled by McDonald or her friends, according to a copy of the review completed in May by the Cherry Bekaert accounting firm. The probe was commissioned by the authority and is the basis of the criminal and civil proceedings.

McDonald allegedly billed the authority more than $50,000 to pay for renovating a vacant inn, then used those funds to pay credit card bills, according to the review. She is accused of doctoring invoices to secure $4.6 million for purchasing tax credits, then embezzling that money.

A plumbing company owned by her husband, Sammy North, allegedly collected at least $66,200 in secret payments, the review found. North has also been arrested, as was Donald F. Poe, a family friend accused of conspiring with McDonald to funnel $841,409 to his solar panel installation company for work the board didn’t authorize.

North did not return messages seeking comment. Ryan Huttar, an attorney for Poe’s company, said that his client performed the work it was hired to do and that it reimbursed the authority $335,000 when one job was canceled.

McEathron wasn’t charged. But he may have felt the tide turning against him. He and McDonald had launched a real estate investment company called DaBoyz, LLC in 2016, shortly after they announced the police academy. The firm used $3.5 million in authority funds to buy four properties, the independent review found. McDonald and McEathron also bought a three-bedroom home in Virginia Beach, which they rented to McEathron’s son and daughter-in-law, court records in the civil lawsuit show.

In one curious transaction, which lawyers for the authority say may have been an attempt to launder money, DaBoyz paid Rappawan, a construction company, $1.9 million for a large tract of land, then sold it back a month later for $1.3 million. Rappawan owner William Vaught Jr. declined to comment, citing the criminal investigations.

In March, the authority filed its own lawsuit, against McDonald, McEathron, Tran, their companies and two contractors. The following month, the FBI raided the authority’s offices, seizing documents in what signified the launch of a U.S. Justice Department investigation, according to local news reports at the time. A spokesman for the U.S. Attorney’s office for the Western District in Western Virginia declined to discuss the probe, which Warren County officials confirmed was underway.

The sheriff was despondent over his tarnished image, his attorney said. He took early retirement in May. A few weeks later, he testified before a local grand jury, appearing at the county courthouse with his wife, a member of the county school board.

Then, just before Memorial Day weekend, McDonald was arrested.

The following Tuesday, McEathron killed himself outside his family’s mountainside home. Deputies found his body. The gun was nearby.

Local activists, who had called for the state and federal investigations to be expanded, rejoiced at Tuesday’s announcement.

They had been pointing to emails between McDonald and other officials — some of which surfaced in the independent review, and some of which were printed out and dropped anonymously in mailboxes — that appear to demonstrate the government was aware of some suspicious transactions.

Kristie Atwood, whose Facebook page “One Mad Mother” has become a repository of news about the investigations, called the latest indictments “just the tip of the iceberg.”