Bill on immigration fails to get unanimous consent in US 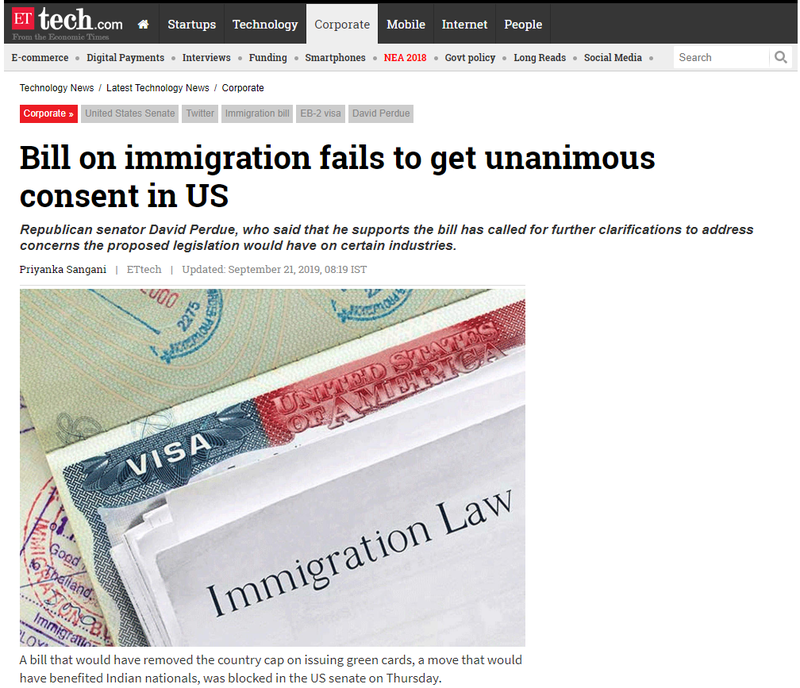 Republican senator David Perdue, who said that he supports the bill has called for further clarifications to address concerns the proposed legislation would have on certain industries.

"Senate just failed to pass (by unanimous consent) to a bill like the one that passed the House in the spring by 365-65. The bill would eliminate per-country caps for employment-based green cards, & raise them to 15% for family-based. Sen Perdue objected," said Julia Gelatt, a Senior Policy Analyst @MigrationPolicy on the micro blogging platform Twitter. "The Senate version added a carve-out for "shortage occupation" workers, to make sure that some new applicants could get green cards, even as current backlogs would be cleared."

Republican senator David Perdue, who said that he supports the bill has called for further clarifications to address concerns the proposed legislation would have on certain industries. He also wanted changes in the language in the bill.

Bill S386, sponsored by Senator Mike Lee and Senator Kamala Harris calls to do away with country-caps for green cards issued by the US, a move that would primarily benefit Indian and Chinese nationals. At present, there is a 7% annual country cap, and the waiting time for Indians for a green card is a minimum of seven years.

If the vote on unanimous consent had gone through, the Senate could have bypassed committees, amendments, and resulting public debates and passed the Bill. The Bill, Fairness for High-Skills Immigrant Act (HR 1044), was passed by the US House of Representatives in July this year.

According to Vivek Tandon, CEO, EB5 BRICS, an EB5 visa consultancy, “Unless the block on unanimous consent is removed, the Bill will go through the normal legislative process, which will make it extremely unlikely that it will ever get passed.The normal process can include referral to a Committee, which will likely delay the passage of the bill. A delay will lead to the Bill ending up in the legislative graveyard considering approaching elections.”

Other likely scenarios would be Senators proposing tough amendments, which would then need the House’s approval for the amended bill. If the Senate and House fail to arrive at a mutually acceptable version, then the proposed law would not go through. “Considering Trump administration’s tough stance against Indian skilled workers, the fact that bulk of the EB-1, EB-2, and EB-3 visa waiting list is made up of Indian IT professionals means the Bill is unlikely to get President Trump’s assent even in the remote event of a Senate approval,” said Tandon.