From the City to The Hill: EB-5 Dialogue with Congressman Hakeem Jeffries

On an overcast Monday afternoon in a conference room sitting high atop New York City, EB-5 attorneys, developers and project managers sat around a large roundtable to discuss legislative issues surrounding the EB-5 program. Congressman Hakeem Jeffries represents the 8th District of New York, consisting of Brooklyn and a portion of Queens. An EB-5 proponent and important ally in the House of Representatives, Congressman Jeffries supports the new draft legislation and readily joined the discussion on behalf of both Congress and his constituents. An avid supporter of immigration reform in the past, Congressman Jeffries has previously collaborated with the New York Immigration Coalition and the Fair Immigration Reform Movement in his sustained efforts to bring comprehensive changes to the U.S. immigration system.

Congressman Jeffries opened the dialogue by emphasizing the extensive diversity of his constituents, a majority of whom are immigrants or children of immigrants, and the colloquial “American dream” that many of them share. This dream, Jeffries stated, “must be preserved” and included in the larger narrative of immigration policy.

Congressman Jeffries, astonishingly knowledgeable about EB-5, recounted extensive discussions with Jared Kushner, Senior Advisor to the President. The Congressman emphasized that it is vital that EB-5 stakeholders come together and support sustainable changes to a program that will bolster its effectivity and availability by engaging the bicameral legislature. The newly drafted bill proposing constructive changes to the EB-5 program will be brought before the Senate in the coming months. Representatives and Senators alike have expressed support for the bill, and though the Regulations going into effect on November 21st are still an all-too-grim reality for some, it is imperative that we continue to support our allies in the promotion of the EB-5 program as it expands and metamorphizes.

The Congressman articulated the common concerns many members of Congress feel surrounding EB-5 investments and job creation, including worries that the program only benefits the wealthiest immigrants and that the TEA method has not accomplished its intended feat of allocating jobs to the people who need them most. Mona Shah (Mona Shah and Associates Global) responded by commenting on the largely partisan support the EB-5 community has received from Republicans, while some Democrats have voiced concerns that EB-5 amounts to a “visa purchase” program for the richest of the rich. Mona commented that the main recipients of EB-5 visas are in fact middle-class immigrants who have used their life savings/accumulations to pursue the American dream and obtain access to exceptional educational opportunities for their children. Nods of agreement swept around the room as others echoed this truth with vehement comments. Nicholas Salzano (National Realty Investment Advisors) affirmed that in his experience dealing with over 100 investors, the overwhelming majority have been what he calls “regular folk” pursuing their dreams of a future in America.

Aaron Grau (IIUSA) confirmed these concerns by emphasizing the need for a larger number of visas in the EB-5 program, specifically through terminating the method by which derivatives are included in the country visa cap counts. This would allow more visas to be allocated to individual investors in each country, bolstering the program which in turn stimulates the U.S. economy and creates jobs across all 50 states. According to a report released earlier this year, EB-5 projects were responsible for over $10 billion of capital investments during 2014-2015 alone, with more than 355,200 reported jobs created. EB-5 project viability along with economic impact outside of the project location was a theme raised by several in the room, including Bob Kraft (First Pathway Partners) and Nadim Ahmed (NuRide Transportation Group). This economic stimulation and job creation does not benefit a party line or advantage specific groups, but benefits the country as a whole by increasing foreign direct investment and burgeoning domestic markets from inbound investments through increased development.

Project developers, including George Xu (Century New York City Regional Center), John Lam (Lam Group) and Charles Abele (Hollywood Circle Development) expressed their concerns over the common misconception that the jobs created by EB-5 investments are not allocated to truly rural or high unemployment areas and emphasizing that though a project may be located in a particular location, the employees are commonly travelling from more rural or suburban surrounding areas. As Carolyn Lee (Carolyn Lee PLLC) pointed out, in New York City the employment pool is largely from the outer boroughs such as the areas that Congressman Jeffries represents, and these EB-5 related jobs have indeed been created for those in areas of high need.

We would like to thank all of those who supported this event and our continued pursuance of a brighter future for EB-5. We are truly grateful for those who stand by us as we re-imagine the future of EB-5 after November 21st, especially Congressman Hakeem Jeffries and his continued advocacy on the hill on our behalf.

Thank you for the generous donations from the below supporters: 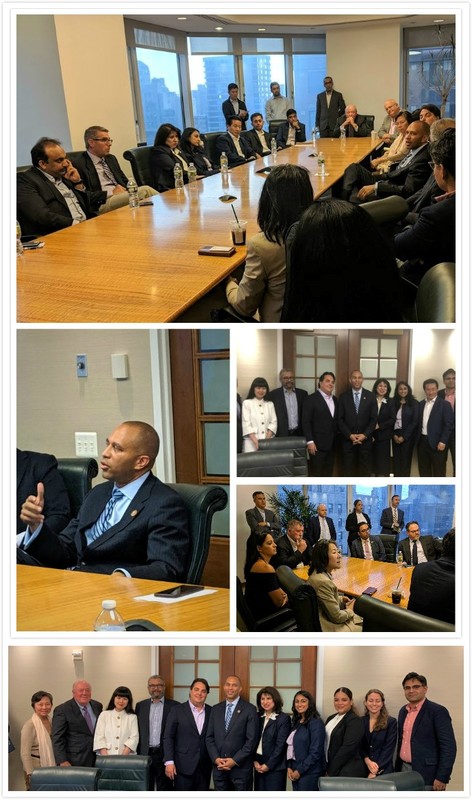 Christina Dilbone is an attorney with Mona Shah and Associates Global.

Christina is trained as a Legal Observer for the National Lawyers Guild, with whom she volunteered and worked on the Know Your Rights project, which endeavors to educate the public on their legal rights throughout criminal judicial proceedings. She also conducted extensive research for human rights scholar Berta Esperanza Hernández-Truyal on the current trends of U.S. states to use RFRA-like statutes.

Christina is admitted to practice law in Florida. She is a member of the New York Bar Association and American Immigration Lawyers Association (AILA).