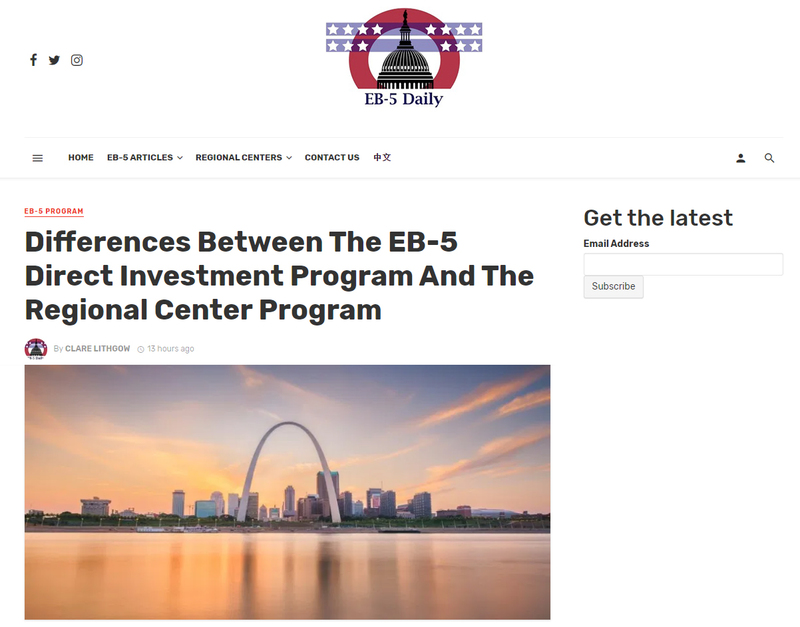 The EB-5 Immigrant Investor Program, also called the EB-5 Direct Investment Program, was created by Congress, in 1990, to provide a method for foreign nationals to become lawful permanent residents through capital investment and job creation.

More specifically, EB-5 investors, their spouses, and their unmarried children under the age of 21 could all qualify for green cards if the principal applicant successfully invested in a US new commercial enterprise that created 10 full-time jobs for US workers.

Although these two programs, the Direct Investment Program and the Regional Center Program are very similar, there are a few key differences.

Getting back to the key differences–the main two differences between the programs revolve around job creation and management. When an investor selects the EB-5 Direct Investment Program the new commercial enterprise they made a direct investment into must directly create 10 full-time jobs for US workers. Whereas, investors in the Regional Center Program can not only count direct jobs created, but they also benefit from being able to count indirect and induced job creation.

Simply put, direct job creates identifiable positions. For instance, if the EB-5 business is a hotel, an example of a direct job is a concierge employee.

Indirect jobs are created when the businesses’ expansion necessitates working with vendors to purchase goods or services. For example, back to the hotel project, an indirect job could be a contracted cleaning service.

Lastly, induced jobs are created when the business expands and its workers spend money locally on goods and services. This type of job creation counts because it boosts the local economy.

When EB-5 applicants invest in the Direct Investment Program they must commit more to the management of their new commercial enterprise than an applicant who invests in the Regional Center Program. US Citizenship and Immigration Services requires that direct investors take a more active role in the business operations of their investment. Investors in regional center projects, however, are allowed to take a much more passive role. For instance, they can be a limited partner or a policymaker. They do not have to be involved in the day-to-day management of the businesses’ operations.

For investors whose sole focus is obtaining lawful permanent residency for themselves and their immediate family, going with a regional center investment is less work and less risk. Some investors, however, have a higher risk tolerance and want to be more actively involved in the business because they are looking to make a higher return on their investment in addition to obtaining a green card, and in their case, the Direct Investment Program makes more sense.

It’s not too late though, you can still apply for the EB-5 Program under the current rules. You can take advantage of the lower minimum investment amount and the less stringent targeted employment area options by filing your EB-5 petition now. Want to get started? Fill out our free EB-5 investor evaluation below and learn more about your eligibility.